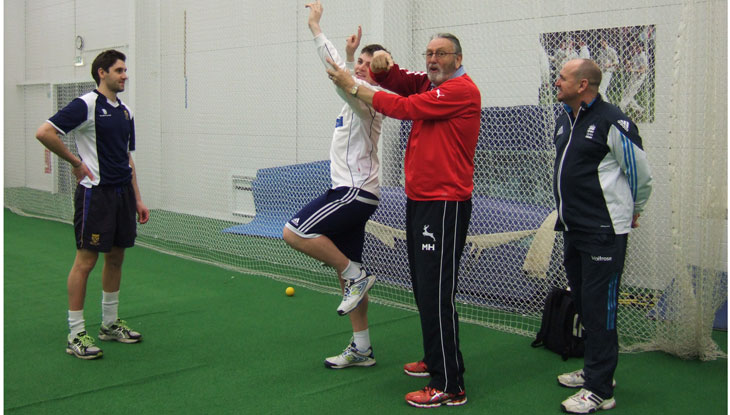 Two former England cricketers are lending a helping hand to Shropshire County Cricket Club’s preparations ahead of the start of the new season.
Shropshire coach Karl Krikken, who recently claimed top prize at the prestigious England and Wales Cricket Board Coach Awards, has arranged for both Mike Hendrick and Jack Birkenshaw MBE to attend pre-season training sessions.
Hendrick, the former Derbyshire and Nottinghamshire seamer who played 30 Test matches for England between 1974-81, has already visited the Neville Cardus Indoor Cricket Centre at Shrewsbury School four times to work with the Shropshire squad.
Now Birkenshaw, who appeared in five Tests between 1972-74 and played for Yorkshire, Leicestershire and Worcestershire before coaching Leicestershire to two County Championship triumphs and also enjoying a successful career as an umpire, is also lined up to help out.
Krikken said he was grateful to both men, who have vast experience, for sparing the time to share their expertise with Shropshire’s young squad.
He added: “I’ve known both of them a long time and worked with them in the past when I was at Derbyshire.
“Hendo’s already been down four times and has a couple more sessions to do. He also coaches at Nottinghamshire and it’s great for our seamers to have the chance to work with him.
“They’ve read up all about him on the internet and have been talking about how he was leading wicket taker at the 1979 World Cup so they’re enjoying learning from him.
“Burky’s now going to come down for a couple of sessions and work with the spinners so that will be a good experience for them.”
Krikken, who is working closely with the batsmen, stressed he’s really looking forward to his second season at the Shropshire helm.
“Pre-season’s going great,” he said. “The lads are working hard and are very receptive to trying things so hopefully it will help us hit the ground running when the season starts.
“The indoor centre at Shrewsbury School is tremendous, as good as a first-class county cricket club’s centre with four lanes and magnificent flooring so it’s a pleasure to work there.”
Shropshire will open their competitive season with a Unicorns Trophy game against Cumberland at Shrewsbury’s London Road ground on Sunday, April 19.
They will play a friendly against Staffordshire at Walsall a week earlier.
Picture: Former England seamer Mike Hendrick, second right, gives some advice to Shropshire bowler Sam Griffiths, watched by county team mate Dan Bowen, left, and Shropshire coach Karl Krikken at the Neville Cardus Cricket Centre at Shrewsbury School.
Stuart Dunn
http://www.shropshireccc.co.uk/wp-content/uploads/2015/02/Coaching-001.jpg 415 730 Brian Foxall http://www.shropshireccc.co.uk/wp-content/uploads/2013/12/SCC-Website-Logo-340x156-WhiteText.png Brian Foxall2015-02-25 11:19:512015-02-25 13:22:062015 Preparations Under Way
Look who’s coming to town !

County old boys to return with Worcestershire
Scroll to top