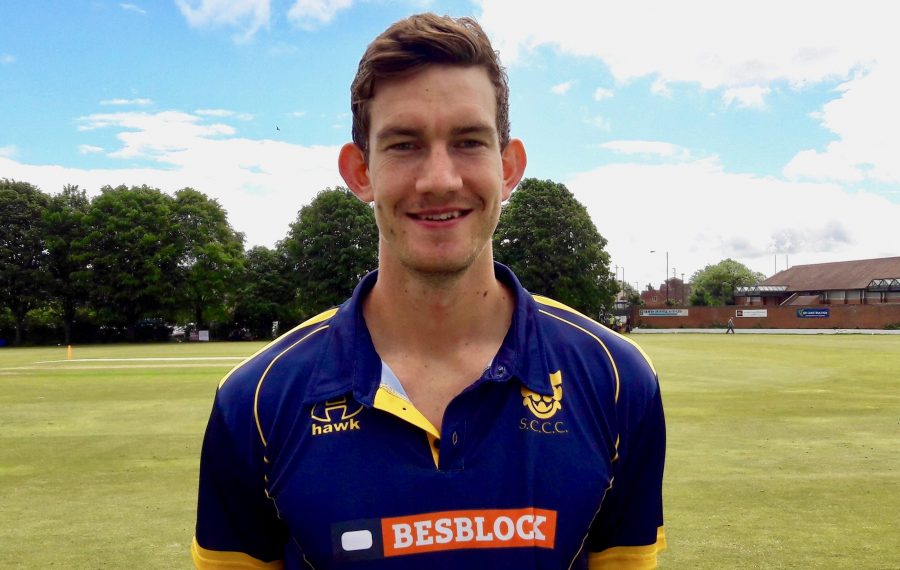 Paceman Alex Wyatt hopes that history repeats itself when Shropshire head to Whitchurch this weekend to play their opening home match of the Unicorns Championship season against Herefordshire.

The former Leicestershire man, who was part of the first team squad at Grace Road for seven years, has fond memories of making his Championship debut for Shropshire at Whitchurch’s Heath Road ground last June when he played a starring role in a 10-wicket victory over Dorset.

Wyatt claimed six wickets in Dorset’s first innings as Shropshire completed a convincing win with a day to spare.

“That was a very good game,” said Wyatt. “I enjoyed bowling there and it’s a very nice ground. I got six wickets in the first innings and then the spinners got all the wickets in the second innings. We won in two days so it was all very enjoyable.”

It was the start of what proved to be a successful first season with Shropshire for six-foot-seven Wyatt. He took 32 wickets in six Championship matches at 18.13 apiece after making the impact that captain Steve Leach hoped he would in his first summer playing Minor Counties cricket

Wyatt said: “It was a very enjoyable season and Steve gave me licence to bowl a lot of overs. I enjoyed the three-day competition and I think that’s more my forte really. I like bowling a lot of overs with a swinging red ball, so it was good fun.”

Shropshire picked up eight points from a rain-affected draw at Wales in their opening Championship Western Division match of the new season earlier this month, with Wyatt and his team mates now looking forward to taking on Herefordshire in a three-day clash which starts on Sunday.

The sides met in a Unicorns Knockout Trophy group game at Brockhampton last month when Shropshire, despite an unbeaten century from skipper Leach, were beaten by nine runs.

Wyatt, 26, said: “I think Herefordshire may have a slightly different side for this game as I know a couple of guys don’t play in the three-day competition but do play one-day cricket for them.

“It will be interesting. They’re obviously a very good one-day side, but we’re looking forward to it.

“We have been a lot stronger in the three-day competition over the last few years, so it should be a good challenge against what seems to be a good side at Whitchurch.

“What happened with the weather at Wales in the first match was unfortunate, but we came away without losing too many points to other teams. Everyone else drew as well so we live to fight another day and we’ll enjoy playing at Whitchurch where Shropshire have always done quite well.”

Wyatt, who believes the county will have learned much from facing Birmingham Bears in two T20 matches at Bridgnorth last Friday, added he is pleased to be playing his club cricket in Shropshire this year after signing for Birmingham League first division leaders Shifnal.

“I’m really enjoying it,” he said. “We’re top of division one at the moment and we’ve won five out of seven now. It’s going really well. We’ve got a good team and we should be there or thereabouts at the top come the end of the season if we live up to our potential.”

The first ball will be bowled at Whitchurch at 11am on Sunday with admission free for spectators on all three days.