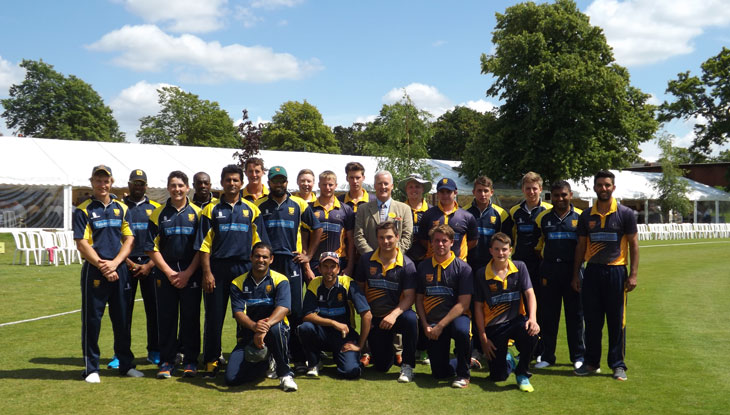 Delighted Shropshire County Cricket Club chairman Toby Shaw has thanked the county’s business community for making the club’s annual ResourceBank Challenge hospitality day a resounding success.
More than 630 guests were wined and dined in a marquee on the edge of the boundary at Wrekin College on Thursday while they also enjoyed a match between Shropshire and a star-studded Invitation XI.
Three Test players were on parade with Indian opening batsman Wasim Jaffer, Pakistan all-rounder Abdul Razzaq and West Indies paceman Corey Collymore helping the Invitation XI to a 78 run victory over a young Shropshire side in a game played over two innings of 20 overs per team.
Mr Shaw said the day had proved a big hit with guests entertained by quick witted compere Roger Dakin, a former England hockey international goalkeeper, and amusing stories from the career of former England cricketer Geoff Miller, until recently England’s chairman of selectors.
An auction was also very generously supported with proceeds from the event, which has been staged successfully for the last eight years, going towards Shropshire CCC who will make a donation to Shrewsbury Drapers Company who are building new almshouses.
Mr Shaw said: “It was a tremendous day, a great success and everything went very well. The weather was glorious, the cricket magnificent, the speakers were very good, the food was great and the feedback we have received has been excellent.
“I thought the atmosphere in the marquee was lovely, a real summer party.
“We are very fortunate that the Shropshire business community always support this event so loyally and in such good numbers. To have more than 630 guests this year was superb. It really has become the premier event of its kind in the county, one that people look forward to.
“Thanks also to Richard Pearson and ResourceBank for their continued support which is much appreciated by the county club.”
As for the match, the Invitation XI batted first and totalled 160-6 from their initial 20 overs. Kuldeep Dirwan top scored with 43 as Bridgnorth’s Kiwi bowler Jamie Brown and Shrewsbury youngster Henry Blofield both claimed two wickets.
Oswestry’s Matt Gregson illumimated the Shropshire reply with a rapid 56 from just 32 balls and Shrewsbury’s Steve Leach added 38 as the hosts racked up 146-6.
Indian star Jaffer struck 36 in the Invitation XI’s 171-6 second time out which meant Shropshire were left with an improbable victory target of 186.
Ross Aucott did his best to inspire his team mates by cracking an entertaining 51 from 33 deliveries, but Shropshire were eventually bowled out for 107, with Wellington’s Zimbabwe international Trevor Garwe and Dirwan both taking three wickets while Pakistan ace Razzaq grabbed 2-17.
Pictured the two teams with sponsor Richard Pearson (ResourceBank)