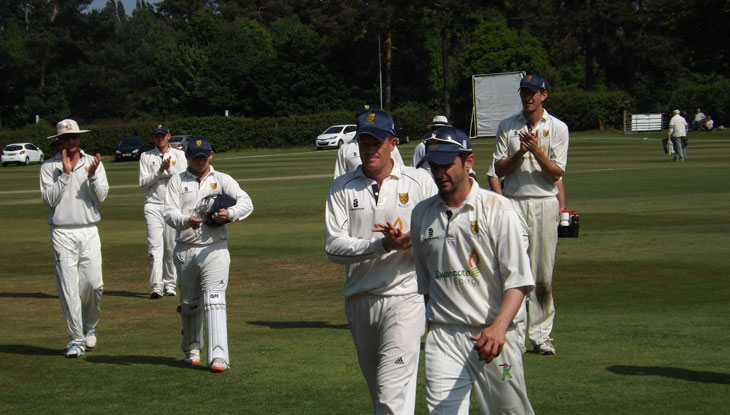 Dorset were left in a real spin as Shropshire opened their Unicorns Championship campaign in style with an emphatic 10-wicket victory at  Whitchurch’s Heath Road, a ground where they just love playing.
Just like last year when they started their three-day season with an even more convincing win over Cheshire, Whitchurch brought out the best in the county as Shropshire, inspired by spinners David Wainwright and Jack McIver, wrapped up victory just before tea with a day and a session to spare.
“I wish we could play all our games here really!” smiled Karl Krikken, Shropshire’s Director of Cricket, delighted with his side’s efforts in overcoming a Dorset side through to the quarter finals of the Unicorns Trophy.
“It’s been a good win after the disappointment of the one-dayers,” added Krikken. “It’s been an exceptional effort. We can’t count our chickens yet. It’s a good start but that’s all it is. We played really well over the one and three quarter days and it’s been a team effort.”
With Shropshire 111 runs in front at the end of the first innings, Dorset completely lost their way after lunch on the second day, collapsing from a promising 63-0 to be dismissed for 119 as Wainwright and McIver inflicted much of the misery on the visitors with a combined nine-wicket haul.
Former Derbyshire star Wainwright, who also picked up three wickets in the first innings, ended with 5-30 from 13.3 overs and Shifnal’s McIver proved the perfect foil from the other end, snaring 4-34 from an impressive 18 over stint on his Championship debut.
There was no sign of the drama to come when Dorset openers Masoor Khan and Tom Arnold matched each other virtually run for run in leading the visitors to 38-0 by lunch as they started to eat in to Shropshire’s advantage.
McIver finally made the breakthrough with the score on 63 when he trapped Khan lbw for 33 and that was the signal for Dorset to quickly fall away to 68-4 with Shropshire suddenly sensing an early finish was a possibility.
Wainwright and McIver made that a reality by really turning the screw and Dorset, bowled out for 185 in their first innings as towering paceman Alex Wyatt impressively helped himself to 6-69, had no answer, losing their final five wickets for just nine runs, as they were removed for 119.
That left Shropshire requiring just nine to win when they briefly had to bat again and two boundaries from Richard Oliver ensured it was all over by 4.10pm with the county collecting 23 points.
Shropshire had earlier resumed on their overnight 215-5, a lead of 30 runs from day one. After contributions higher up the order from Joe Carrasco (39), McIver (37) and skipper Steve Leach (30), James Ralph and Wainwright put on 83 for the sixth wicket before Wainwright was run out for 23.
Ralph, Shropshire’s experienced former captain, continued to close in on three figures until he was bowled by Rob Pack for 87, a fine knock from 129 balls which included a six and 10 boundaries.
Ross Aucott and Whitchurch wicketkeeper Luke Tinsley increased Shropshire’s first innings advantage to more than 100 runs before Tinsley, making his debut at his home club ground, was caught behind off Jake Lilley for 12, who followed it up by bowling Wyatt without scoring.
Lilley, who took 4-47, then struck again, bowling last man Sam Griffiths to leave Aucott unbeaten on 18, with Shropshire all out for 296 in the 79th over, a lead of 111 at the halfway stage.
Former Leicestershire paceman Wyatt had been Shropshire’s star man with the ball on day one, claiming half a dozen victims as Dorset, despite half centuries from opener Arnold and Michael Porter, stumbled from 111-2 to be bowled out for 185.
It all added up to an ideal start for Leach in his first game at the helm, with Shropshire now looking forward to their next Championship match, at Oxfordshire, which gets under way on June 19.
Stuart Dunn
Picture : David Wainwright & Jack McIver lead the team off the field, closely followed by AlexWyatt, at the end of Dorset’s 2nd inns
http://www.shropshireccc.co.uk/wp-content/uploads/2016/06/Dorset-at-Whitchurch-2016-0.jpg 415 730 Brian Foxall http://www.shropshireccc.co.uk/wp-content/uploads/2013/12/SCC-Website-Logo-340x156-WhiteText.png Brian Foxall2016-06-06 19:25:462016-06-06 19:25:46Dorset left in a spin as Shropshire wrap up convincing win
Shropshire CCC profile: Ross Aucott