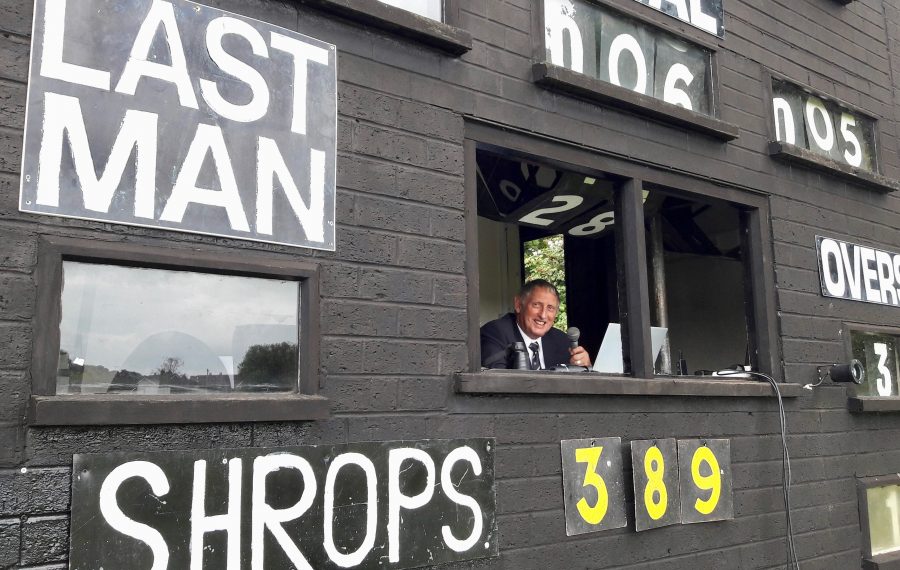 Shropshire County Cricket Club’s long-serving scorer Colin Barthorpe could not have scripted his final match in the role any better as the players gave him a winning send off by beating Wiltshire this week.

After 17 years totting up the figures that matter in Minor Counties matches across the country, Colin has decided it’s the right time to leave the scoreboard behind.

He still plans to watch Shropshire play whenever he has chance and will continue as matchday announcer at home games.

But it’s the end of an era as far as his role as the county’s popular scorer goes.

Colin, who took over from Peter Hassell in the score box in 2000, said: “I’m going to miss it but my philosophy has always been to give up whilst you’re ahead and people will say they’re sorry to see you go rather than saying behind your back that they wish you would give up!

“I’ve done 17 years and I’m not going to disappear. I’m still going to be doing the announcing for home matches and I’m hoping to travel to most of the away games and just relax and enjoy myself with the supporters.”

Colin’s passion for cricket shines through and his love for the game remains as strong as ever.

He enjoyed a long playing career as an all-rounder, initially with Kenilworth Wardens pre-Birmingham League days, and then Market Drayton when he moved to the county in 1976.

He then became scorer for Drayton – he is currently club president – and it was while fulfilling his scoring duties in the Shropshire League that he received the invitation to become involved with Shropshire.

“The late Peter Dawson was walking around the ground at Market Drayton one day,” recalled Colin. “He came up for a chat and asked if I fancied scoring for the county.

“I knew that he was coaching the Shropshire boys under-12 side at the time and that they were playing at Market Drayton the following Thursday. I assumed he was asking me to score that game but he said he meant the full county side.

“My first game was a one-day match against Herefordshire at Shrewsbury in 2000. I turned up very nervous. That was the first time I had met Neville Birch, the long-serving county secretary, who gave me the score sheets, wished me luck and that was that.

“Jim Morris, who still scores for Herefordshire, was with me for that first game and he looked after me.”

Apart from his international hockey commitments as a technical official – he was on duty at the likes of the Commonwealth Games in Manchester and the London Olympics – Colin has been a permanent fixture at Shropshire matches since with a host of fond memories.

He said: “The first highlight would have to be scoring at Lord’s in 2003 when we got to the one-day final against Cambridgeshire. We lost unfortunately but I was over the moon to score there.

“The second would be winning the one-day tournament at Durham in 2010 against Lincolnshire. That was a fantastic day.

“In terms of Shropshire players, I really do think that my highlight was watching James Ralph score an unbeaten century against a Somerset attack led by Andrew Caddick at St Georges in 2000. That was my second game and to see that was special.

“Over the years, I would say Ralphy has been the batsman I’ve most enjoyed watching. When he’s on song, it’s beautiful to watch. His timing is lovely.

“As for bowlers, I had a lot respect for Ben Sanderson. He joined us from Yorkshire and moved to Northants. I thought he was very good.

“The bowler who probably made the most impact in his time with Shropshire was Andy Gray. He took a lot of wickets.

“But we’ve had a lot of good players over the years and it’s been nice to see a number of them go on and play first-class cricket.

“Jimmy Taylor only played one Championship game for us, against Oxfordshire at Banbury, but he went on to do so well and play for England. Adam Shantry played one game in my first year, taking five wickets, before going on to do well.

“Joe Leach was in the 2010 final side at Durham and it’s lovely to see him now captain at Worcestershire while Joe Clarke, Ed Barnard and Jack Shantry have also played for Shropshire during my time and since impressed for Worcestershire.”

He said: “Colin has been a magnificent stalwart for the county and is very highly regarded around the Minor Counties circuit.

“He has wonderful knowledge of the game and is very measured in his thoughts. He’s been an excellent scorer for the club and an important member of the committee. He’s a man I would always go to for an opinion as I have always held what he had to say in very high regard.

“He will certainly be missed in the score box at our matches and I wish him every happiness in his retirement and hope that he now has more time to spend with his wife Sandra.”

“He’s been a terrific servant,” he said. “Colin’s a really nice guy and is really good around the players. We all wish him well and thank him very much for his service.”

Pictured: Colin Barthorpe keeps score for Shropshire for the final time at this week’s match against Wiltshire at Bridgnorth.