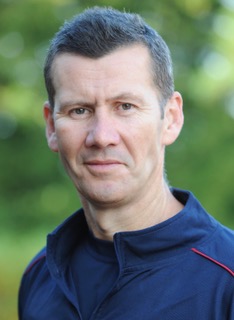 Jason Weaver is excited about the next chapter of his cricketing career after returning to his home county to work with Shropshire’s first team squad earlier this year.

Born in Wellington and a former Shropshire player, Jason continues to enjoy a successful coaching career, having worked for the ECB before spending nearly 14 years with Kent County Cricket Club.

Now he’s looking forward to sharing his wealth of experience with Shropshire’s cricketers after getting to know the squad at a series of winter training sessions ahead of the coronavirus outbreak stopping everything in its tracks.

Jason says: “As a Shropshire coach, it’s been great to be back in the county and to be involved. The players worked hard at the sessions we had and showed how much they want to develop, which is really important.

“From experience, the best teams are the ones whose players bring energy and take responsibility in wanting to drive their own games forward. They are very much the ones who set the standard.

“As a coaching team, we want to help develop independent thinking, confident cricketers who have pride in wanting to play for Shropshire. That’s a key aim for us.”

It provided the chance to meet up once more with a man he has known since they were Shropshire team mates between 1989-91.

“Working with John again has been really good,” he says. “I was fortunate to play with John for Shropshire and we’ve kept in touch through our roles with the ECB, with John also working with the England under-19s when I was at Kent.

“You look to see what the best operators do and John is someone who gets that balance right in helping players to develop. He sets high standards, but creates an environment that’s good to work in, both from a coach and a player’s point of view.

“One of the philosophies that is key for all the best coaches is that you want to develop players to fulfil their potential and be the best they can be, as people and as cricketers.”

His introduction to the game came as a pupil at Newport’s Burton Borough School, with his first club game as a youngster with Forton. He was guided by Gerry Gladwell, who coached him throughout his playing career and heavily influenced Jason’s own coaching style.

Jason enjoyed many years as a wicketkeeper-batsman playing for Newport in the Shropshire League, also spending two seasons with Shifnal after being keen to step up to the Birmingham League.

Breaking into the Shropshire team was the highlight of his playing days and he twice lined up for the county in high-profile NatWest Trophy ties against Derbyshire and Leicestershire.

“I played as a batter when I first started playing for the county. We used to have Shropshire second XI fixtures, probably the equivalent of the Academy fixtures now, and we would play a number of second XIs from first-class counties like Worcestershire and Glamorgan. I was lucky enough at that time to be captained by Brian Perry.”

Having been keen to pursue a career in coaching, former Shropshire chairman Bryan Foulkes provided him with an opportunity to work on the Shropshire coach education programme, with Jason achieving his coaching qualifications.

“I was working as a special needs teacher in Oswestry, but I coached while still playing,” he says. “I received the opportunity to go on a Lord’s Taverners coaching scholarship to New South Wales Cricket. Off the back of that trip to Australia, I was appointed Coach Education Manager for the ECB.

“I was very lucky to work alongside Gordon Lord. He was my boss at the ECB and is someone I’ve since kept in touch with as a friend and a mentor.”

After three years with the ECB, Jason joined the staff at Kent County Cricket Club, beginning nearly 14 years based at the club’s headquarters in Canterbury.

“When I initially went down there, I was appointed Kent’s High Performance Manager,” he explains. “That meant I had responsibility for the age group squads, the women’s squads and the district programme, while I was also involved with the club’s first and second XI teams.”

“I was then appointed Academy Director and had responsibility for the Kent pathway and the club’s Academy players.

“It was good to see a number of players graduate from the Academy to the professional staff during that time and Kent has a good transfer rate in terms of home grown talent.

“The last three Academy graduates were Zak Crawley, who has now made his England debut, Ollie Robinson, who has played for England A, and Jordan Cox, who has played England under-19s, so it’s always good to see players make the transition.

Jason felt the time was right for a new challenge last summer when he took the decision to leave Kent.

“It was a tough decision in some respects, but I wanted to explore different avenues,” he says. “It was the right time for a change. Looking back, it was fantastic to see the success that we had at Kent.”

Now a self-employed cricket coach and mentor, his Shropshire role is one of a number of opportunities to have come Jason’s way over the last six months.

He also worked with up and coming wicketkeepers involved with the pathway at Sussex County Cricket Club over the winter, he is part of the ECB mentoring programme, supporting coaches as they work towards achieving their coaching qualifications, while he also offers private coaching at schools and clubs.

Jason enjoyed working with the Shropshire squad in his early sessions and had been looking forward to the county’s busy schedule of matches.

He adds: “We held winter training and then it was a matter of looking at what training we were going to do outside, what fixtures we were looking to play, and then unfortunately it stopped very quickly.

“Plans were in place for me to attend training and matches with a range of other coaches who have been involved and who have done a very good job over the years.

“I’ve followed the progress of the Shropshire players while I’ve been down in Kent and seen the success that they’ve had. It’s always great to see players from your home county making that transition into first-class cricket.”