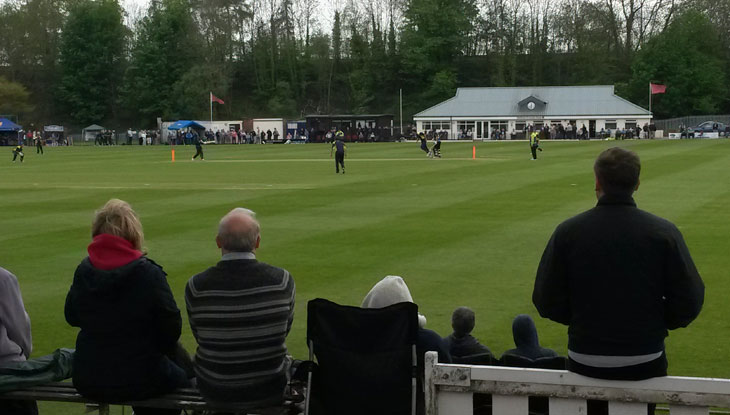 Shropshire opening bowler Sam Griffiths enjoyed a night to remember by taking a hat-trick – but Worcestershire Rapids still managed to emerge 24 run winners.
Griffiths claimed 4-37 as the New Road professionals, at full strength apart from Moeen Ali following his latest England call up, were restricted to 146-9 from their 20 overs in a showpiece Twenty20 clash between the sides.
Shropshire, in reply, looked on course to spring a shock in front of a good crowd at Shifnal when openers Steve Leach and ex-Worcestershire man Richard Oliver quickly put on 42 for the first wicket.
But once Oliver was the victim of an unfortunate run out – both he and Leach made 21 – it led to Shropshire losing four wickets for just nine runs.
They eventually ended a respectable 122-8 after giving a good account of themselves against first-class opposition.
Shropshire will now hope to build on their encouraging performance, which drew praise from Worcestershire skipper Daryl Mitchell, when they meet Cheshire in the Unicorns Trophy at Oswestry on Sunday (11am).
Griffiths will certainly not forget his big night against the Pears given his heroics with the ball.
It was an eventful evening for the Shrewsbury seamer as he bowled Tom Kohler-Cadmore in his opening over before being hit for four boundaries by the highly-promising Joe Clarke – one of four Shropshire old boys in the visiting side – in his second over.
Then came the 25-year-old’s big moment as, with successive deliveries, he removed Mitchell, bowled Clarke for a rapid 29, and followed it up by trapping Ross Whiteley leg before.
“I’ve only taken a hat-trick once before, back when I was playing for Shelton a long time ago, so it was well overdue,” smiled Griffiths. “I was very happy with it. I just bowled nice and straight and it seemed to do the trick.”
Worcestershire, preparing for their NatWest T20 Blast opener next Friday, were flying at 54-1 before Griffiths got to work.
Wickets continued to fall at regular intervals, but decent knocks from New Zealand internationals Mitchell Santner (26) and Matt Henry (22) lifted the score up to 146-9.
Shropshire’s chase started well before a flurry of quick wickets rocked them back. But they kept playing their attacking shots, debutant Jack McIver hitting an entertaining 23, as they closed on 122-8. Santner and Brett D’Oliveria both picked up two wickets.
Worcestershire skipper Mitchell said: “It’s always nice to come to one of these lovely Shropshire grounds. It’s important to get a run out in a T20 game before we start properly next week.
“It was a good test and I thought it was a pretty good game of cricket really. We got a lot out of it.”
Karl Krikken, Shropshire’s director of cricket, added he was impressed with his side’s efforts.
“Worcester brought their first team and we acquitted ourselves well,” he said. “To keep them down to 146 was a great effort and our bowling was very good. Our fielding was also a lot better than last year.
“Griff bowled really well – to get a four-for and a hat-trick is superb.”
Stuart Dunn
Pictured: The scene at Shifnal Cricket Club as Shropshire hosted first-class neighbours Worcestershire Rapids in a showpiece T20 match.
http://www.shropshireccc.co.uk/wp-content/uploads/2016/05/Shifnal-Cricket-Club-as-Shr.jpg 415 730 Brian Foxall http://www.shropshireccc.co.uk/wp-content/uploads/2013/12/SCC-Website-Logo-340x156-WhiteText.png Brian Foxall2016-05-14 10:19:362016-05-14 10:19:36Griffiths takes hat-trick as county impress against Worcestershire
Same again for Cheshire clash