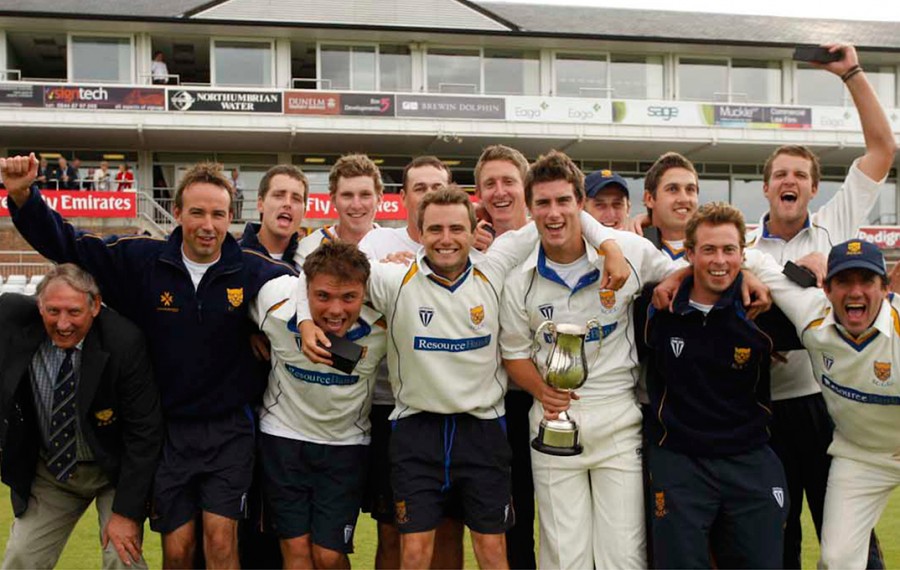 Ten years on from captaining Shropshire to victory in the MCCA Trophy final, Ed Foster insists it remains a very proud moment and a highlight of his cricketing career.

August 11, 2010 is a date that will be forever remembered by Foster and his team mates as they lifted Shropshire’s second major trophy, following the Minor Counties title triumph of 1973.

They did it in some style, too, beating Lincolnshire by seven wickets in the final at Durham County Cricket Club’s Chester-le-Street headquarters.

“I’m very proud, particularly as it was in my first year as captain, that we managed to go all the way and lift the trophy,” says Foster, who was joined in the victorious Shropshire team in the north east by his younger brother Rob, for so many years also a Shrewsbury team mate.

“Maybe that youthful exuberance and naivety we had in the side just carried us through really.

“It was an interesting run to the final and the following year, 2011, we had a very good side and should have gone on and reached the final again, but we just fell short and lost to Cambridgeshire by 11 runs in the quarter finals at Wellington.

“But it was a great achievement to have won it a year earlier and it’s nice to be able to look back on now.

“It’s been quite rare for Shropshire to win trophies over the years, so to be involved with doing that was brilliant.”

Ahead of the final, Foster, who was named man of the match, was optimistic about Shropshire’s prospects – and his team delivered when they really needed to most.

He recalls: “It was a bit of an unknown to play Lincolnshire as they were not a team in our division.

“I knew a few of their players and I had been to university with Vikram Atri, but they were still largely unknown to us as a team.

“It was a big occasion and the fact that Shropshire supporters always travelled so well meant lots of people made the long journey and came to watch, which was brilliant.

“Playing in a final was a great experience, something we all wanted to be part of, and to walk away with the trophy at the end made it all worthwhile.”

Lincolnshire skipper Paul Cook won the toss and decided to bat, helping his side recover from 125-5 to post 249-6 from their 50 overs. Cook hit 50 and Liam Andrews, at No 7, struck an unbeaten 52.

“We were happy to bowl first,” says Foster. “We were quite relaxed as a side and throughout the tournament we batted both first and second. We were comfortable either setting a score or chasing.

“When you go to a first-class ground as an amateur side, there’s always the chance that you might well be on a pitch on the square over to one side, which was the case at Chester-le-Street and meant we had a short boundary to contend with.

“It always makes the game a little bit abnormal because generally in Minor Counties cricket you are in the middle of the square and have equal boundaries all the way round.

“That said, we knew that the pitch and the outfield were going to be of a high standard. We were very much set up to play well on good pitches and that was always going to play in our favour.

“I don’t think we were too happy with Lincolnshire getting up to 249. Their last pair that batted put on nearly 80. When they were 125-5, we would have fancied ourselves to certainly get them out for under 200.

“What made quite a difference in the tournament was the introduction of the power plays, so there was a second power play later on in the innings that the batting side were able to take. That would quite often have an impact on how the game was going.

“It meant that we were restricted as far as fielding positions went and Lincolnshire could be a little bit more attacking and chance their arm.

“That was a feature of our cricket throughout the tournament that year. I think of Rob and Anthony Parker down at Welwyn Garden City in the semi-final when they really hammered home our advantage.

“It became a feature of our play in the following years, scoring heavily in those power play overs.

“It was something that Lincolnshire took advantage of that day. You could argue that it was all or nothing for them at that point as they had to crack on and put a score on the board, so you would probably say they won that period of play in their last 15 overs.

“But to get around 250, five an over, on a good pitch like it was when you have power plays, it was only about par, probably slightly below par, so we still fancied our chances, and that was shown with the number of overs that were left by the time we finished.”

Shropshire’s chase could not have gone much better as Foster, a consistent opening batsman, led from the front to guide his side to victory.

After putting on 56 for the first wicket with Jono Whitney (30), Shropshire were 112-3 when Foster was joined in the middle by Joe Leach, and they joined forces to see the job through with an unbroken partnership of 139 to steer the county to 251-3 with 31 balls to spare.

Leach, now club captain at Worcestershire, struck a six and four boundaries in cracking an unbeaten 67 from 81 balls, while Foster ended undefeated on 95, from 121 balls, a fine knock which featured two big sixes and seven fours.

“It went really well,” says Foster, reflecting on Shropshire’s successful chase. “I remember referencing at the time how well Jono Whitney played. It was so important to get off to a good start and we put on nearly 60 pretty quickly. I think Jono was out in the ninth over, so we were up and ahead of the rate already.

“Jono is more of an attacking player than me, so it allowed me to breathe and settle into it a little bit more as he got us off to such a flying start.

“There were then a couple of partnerships with Chris Murtagh and Rob before Joe Leach came in and played really well.

“Joe’s always been a mature guy and a good guy to bat with in situations like that when there’s a bit of pressure, as there was that day as we were looking to win Shropshire’s first trophy for many years.

“We were largely untroubled through to the end. It went particularly well and there were just over five overs left when we reached our target.”

Foster received the man of the match award – but lifting the MCCA Trophy was always the main objective, he says, ahead of any individual recognition.

“The overall aim was to win the trophy,” he stresses. “If I think back to the start of the season, it was my first year as captain and, as I referenced in my handbook report, I met with Chris Murtagh, our professional, and told him that I thought we might struggle in one-day cricket but that we would do all right in three-day cricket.

“But then we went and exceeded expectations in the one-day game, so it was very much all about winning and making sure that we got over the line.”

Foster remembers the victory celebrations well, although it remains a regret that his own had to be cut short as he had arranged to be in London the following day.

As he admits: “On reflection, it’s a bit of a regret that I drove south at about 10pm that night because I had to be in London the next day. In hindsight, that was bad planning and something I should have knocked on the head.

“We had a great time in the dressing room with the players and the key people involved.

“We then went back to the hotel where both teams were actually staying.

“I believe the guys later went off into Newcastle and had a great time, so, from my side of things, there’s some regret about missing that, but I know the guys did the celebrations justice!”

Foster enjoyed the whole run in the Trophy during that memorable 2010 season, with Shropshire beating Cumberland, Northumberland, Staffordshire, Suffolk and Hertfordshire along the road to the Durham final.

The quarter-final success over Suffolk at Shrewsbury’s London Road, Foster’s home ground for so many years, particularly stands out.

Rain meant Shropshire only got as far as 4-1 in pursuit of Suffolk’s 313-4, which featured centuries from former Northamptonshire opener Tom Huggins and ex-Derbyshire batsman Hassan Adnan, so a bowl out was required to determine the winners.

Shropshire held their nerve to win through 5-3, with Rob Foster, twice, Leach, Mike Barnard and Richard Oliver also successful when the pressure was really on.

Foster, who was county skipper for three seasons, following in the footsteps of his dad John, says: “People often say about that match that we were lucky and, yes, when you go to a bowl out it is potentially 50/50.

“Some people say we were fortunate because Suffolk made 313-4, but the pitch that day at Shrewsbury was an absolute belter and 313 was below par.

“If you look at the scores we got throughout the tournament that year, we made 331 in the semi-final at Hertfordshire and over 300 in the first game against Cumberland.

“Our batting line up was so deep with people like Anthony Parker coming in lower down the order. At times, you had someone like Alex Blofield batting at nine or 10, so we batted a long way down and we would have fancied ourselves on that belter of a pitch to chase that against Suffolk.

“We also had a bowl out in a National KO game with Shrewsbury around the same time, which we also won. My brother Rob did well in both of them, hitting hit the stumps four times out of four.

“I know he doesn’t bowl any more, but people forget how good a bowler Rob was, and when you have someone with a record like that in your side it gives you a bit of confidence.”

Foster adds the team spirit in the Shropshire side also proved key in driving them on to lifting silverware.

“There were quite a lot of guys involved that I played with at Shrewsbury and others I had played with for a number of years coming through the Shropshire ranks, people like Jono Whitney, Steve Taylor, Anthony Parker, Matt Tilt, really high quality local cricketers.

“When I took over the captaincy, I got Terry O’Connor involved and what we wanted to do was to play the Shropshire lads and have two top quality pros, which we had in Chris Murtagh, a top quality batsman fresh out of the first-class game with Surrey, and Andy Gray, a high-quality experienced spinner.

“Combined with that, we had all-rounders like Joe Leach, Rob, Alex Blofield, Mark Downes, so we had a lot of depth in both our batting and bowling, a lot of youthfulness, and it all came together well.”

For more memories, photos and match highlights of that brilliant day in August 2010, visit http://www.shropshireccc.co.uk/minor-counties-knockout-trophy-winners-2010/

Pictured: Shropshire celebrate their victory at Chester-le-Street 10 years ago, as captain Ed Foster gets his hands on the MCCA Trophy.