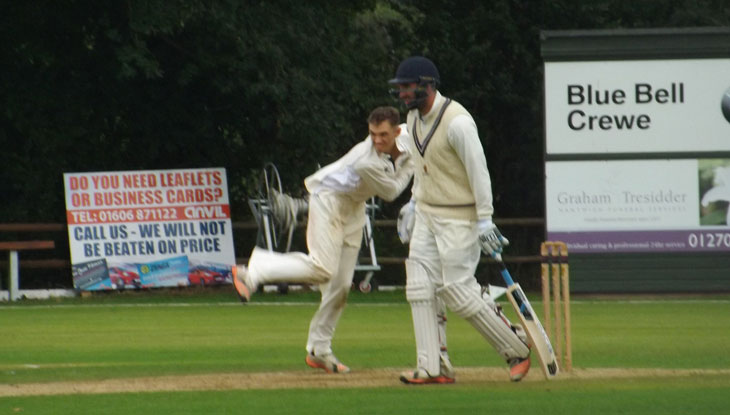 Full name: Henry Charles Blofield
Birthplace/date: Shrewsbury, September 2, 1995.
Clubs you have played for? Shrewsbury CC.
Biggest influences on your career? My family. They love their cricket and have always supported me. Although I haven’t played as much cricket with my brother Alex as I would have liked, I loved playing with him at Shrewsbury CC. Playing so much garden cricket with him when I was young has given me that competitive edge.
In terms of coaches, Paul Pridgeon has had a significant influence. He’s always willing to work with you and I’m very grateful for his time and efforts over the years.
Best player you have played alongside? I would have to say current Shropshire teammate David Wainwright. Being a fellow finger spinner, I’m a big admirer of his skills. There’s certainly a lot I can learn from him and I love bowling long spells in tandem with him.
Best player you have played against? Probably Wasim Jaffer, the former India Test batsman. I have been fortunate enough to play against him a few times in league matches and ResourceBank days at Wrekin College. He’s got a fantastic record and he has made me appreciate how good a Test player is. It’s also nice to say that I’ve got him out, even if it was caught at long on – it’s still in the book!
Favourite grounds? London Road, home of Shrewsbury CC, where I’ve always played my club cricket. I loved playing at Shrewsbury School and never turn down the opportunity to go back there to play. I’ve been fortunate to also play at Arundel a couple times on sunny days.
What have been your cricketing highlights? Captaining Shrewsbury School to two Silk Trophies and the National Schools’ T20 competition provided some special memories. Subsequently, getting selected for the MCC Schoolboys to play against the England under 17s at Lord’s is definitely up there. That was also the season of my Shropshire CCC debut, which I will never forget. I was also very proud to be part of the Birmingham League winning side last season with Shrewsbury CC
What do you enjoy most about playing for Shropshire? Having played age group cricket for Shropshire since the under-10s, it fills me with immense pride pulling on the shirt. It’s a very high standard of cricket and you know you have to be on top of your game to be successful. The Shropshire boys always ensure you have a very enjoyable time, on and off the pitch. I’m also lucky to be part of a very talented age group in which many of us have gone on to represent the full side, so playing with them is extra special.
Hopes for the season? To do as well as possible for Shrewsbury and Shropshire. With Shrewsbury, I hope to help the side to finish as high as we can in the league.
Long-term cricketing ambitions? To continue playing at the highest standard I can for years to come and to keep enjoying my cricket.
Favourite other sports? I love golf and football. I’m a Liverpool fan so I’m looking forward to seeing how we’ll do under Klopp.
Stuart Dunn
Picture – Henry in action against Cheshire 2016
http://www.shropshireccc.co.uk/wp-content/uploads/2016/08/Henry-Blofield-v-Cheshire-2.jpg 415 730 Brian Foxall http://www.shropshireccc.co.uk/wp-content/uploads/2013/12/SCC-Website-Logo-340x156-WhiteText.png Brian Foxall2016-08-12 22:11:272016-08-12 22:11:27Henry Blofield Shropshire CCC profile
Team to play Wiltshire

Shropshire end season with defeat at Wiltshire
Scroll to top