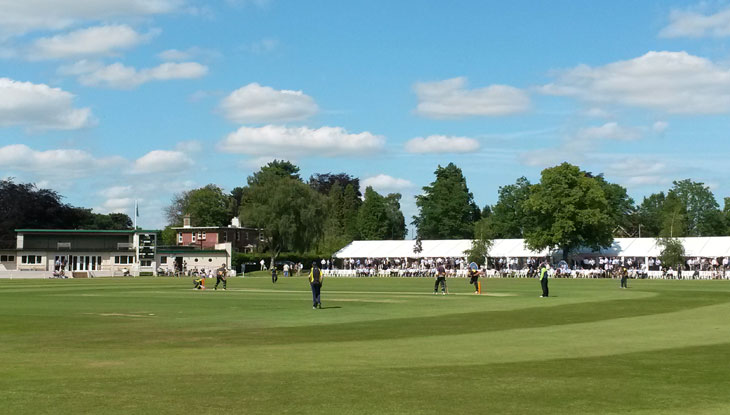 Jaffer, one of the star names on parade at Wrekin College, inspired an Invitational XI to a 71 run victory over Shropshire in a match which saw both sides have two innings of 20 overs each.

Nearly 700 people watched the action with the game the showpiece of Shropshire’s annual hospitality event. Guests were served food and drink throughout the day while enjoying the cricket from a marquee on the edge of the boundary.

A popular social event in the calendar, it’s an ideal opportunity for Shropshire’s business fraternity to relax and network while also having the chance to enjoy some top quality cricket.

“The weather was fantastic and there was some very good cricket played,” said Shropshire chairman Toby Shaw, the event organiser. “We also had a magnificent time with all the hospitality guests in the marquee.

“Everyone enjoyed it and it was epitomised by the number of people, 685, that came along.”

Jaffer, who has played 31 Test matches for India, provided most of the batting fireworks as the Invitational XI proved too strong for a Shropshire side showing four changes from the team which drew at Berkshire in the county’s latest Unicorns Championship match.

West Indies A star Kevin Stout top scored with 38 as the Invitational XI totalled 147-4 in their first innings, with Matt Higginbottom claiming 2-29.

Shropshire responded with 150-4 which was built around a stand of 75 for the second wicket between wicketkeeper Simon Gregory (61) and opener Ross Aucott (43).

Jaffer then took centre stage as the Invitational XI rattled up 212-3 second time out. Batting at No 3, Jaffer cracked a stunning, unbeaten 106 from just 55 balls, hitting 13 fours and five big sixes.

He put on 150 for the second wicket inside 13 overs with Barbados Twenty20 player Jamar Griffith (50).

That left Shropshire with a victory target of 210 which always looked a tall order against a side including former West Indies Test paceman Corey Collymore.

Omar Ali struck 32 but Shropshire pulled up short, dismissed for 138, with Newport’s Indian pro Rajat Bhatia (4-27) inflicting much of the damage.

This year’s chosen charity, The Shrewsbury League of Friends, are also set to benefit from the generosity of the local business community at the event via a donation from Shropshire CCC.

Pictured: The scene at Wrekin College as Shropshire take on an Invitational XI in the annual ResourceBank Challenge.