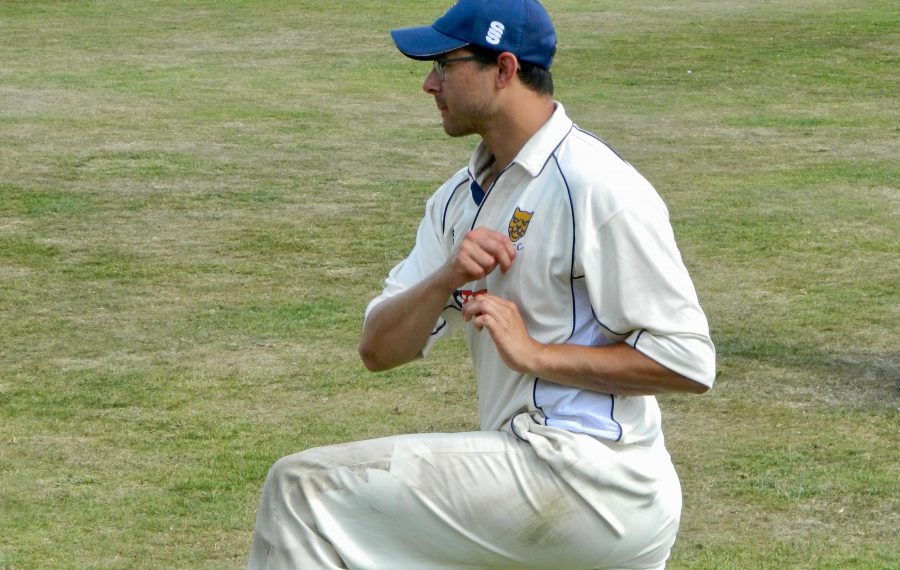 Joe Carrasco struck a defiant, unbeaten half century as Shropshire just about held on for a draw after a nail-biting finale to their opening home game of the season in the Unicorns Championship against Herefordshire.

With visiting fielders crowding around the bat, Carrasco, who ended 55 not out, held his nerve to steer Shropshire to 226-9 at the 6.30pm cut off point after facing 135 balls and spending nearly two and a quarter hours in the middle at Whitchurch.

With last man Dan Bowen watching on from the other end, Carrasco played out the final over from four-wicket Peter Burgoyne to ensure both teams emerged with 12 points, with Shropshire’s director of cricket Karl Krikken quick to hail the contribution of the Oswestry batsman.

Krikken said: “I think Joe’s a very fine player. He’s played really well and he’s one for the future for Shropshire. I think he’ll go from strength to strength. He’s got a good technique and he’s very strong minded.”

But Krikken, whose side are next in action when they take on Oxfordshire at Shifnal, starting on July 2 added: “It should never have got that close really. We played some bad shots and made some bad decisions. It was a fine wicket, a very good wicket that Whitchurch had produced. We just needed to hold our bottle and we played some rash shots at various times. It was a nail-biter, but it should never have got to that stage really.”

Herefordshire started the third and final day in a strong position, well placed at 226-2, a lead of 251 runs.

There was some early joy for Shropshire when Burgoyne departed for 117, edging a catch to Omar Ali off Alex Wyatt, after adding just 14 to his overnight score.

The hosts did not have to wait long to strike again with Warrick Fynn claiming his first Shropshire wicket, Ryan Lockley holding on to a catch to remove Benny Ellis-Dabrowski (26).

Then came a fifth-wicket stand of 97 between Ian Bullock and Taylor Pugh (48no), eventually broken when Fynn, a left-arm spinner, picked up his second wicket, bowling Bullock for 52.

Herefordshire had moved on to 381-5 when they declared at lunch, leaving Shropshire an unlikely victory target of 407 from a minimum of 63 overs.

Ali was unable to repeat his first innings heroics when he had gloriously struck 141, his best score for Shropshire, when he fell early for 20, and 44-1 quickly became 53-2 when Shrewsbury’s Will Parton was trapped lbw by Barney Morgan without scoring.

Skipper Steve Leach had hit an unbeaten ton against Herefordshire in the Unicorns Knockout Trophy last month and he was well set again on 52, from 90 balls, when he was third man out, stumped by wicketkeeper Bullock off visiting captain Matt Pardoe.

Shropshire reached tea at 120-3 but it started to go wrong when play resumed as they soon found themselves in trouble at 146-6. Fynn, who has scored more Birmingham League runs than anyone this season, became the first of three quick Burgoyne victims for 31 while Jack McIver and David Wainwright contributed just four apiece before also falling to the former Derbyshire all-rounder.

Carrasco, at No 5, attempted to steady the ship, putting on 53 for the seventh wicket with Lockley before the wicketkeeper was bowled by Pugh for 28.

Jack Edwards quickly came and went without troubling the scorers as Burgoyne, who took 4-44 from 27 overs, struck for a fourth time, getting his man lbw, and when Alex Wyatt went for eight, bowled by Jack Taylor, Shropshire were staring down the barrel at 222-9.

But Carrasco played with real determination to ensure Shropshire managed to secured a share of the spoils from a high-scoring encounter which produced more than 1,300 runs over three days.

Herefordshire had taken full advantage of winning the toss and electing to bat first on a sweltering opening day as they rattled up 392. Burgoyne, who enjoyed a fine match, top scored with 94 after openers Pardoe (66) and Chris Whittock (55) had earlier put on 119 for the first wicket.

Tom Hage weighed in with a rapid 69 down the order, but the Shropshire bowlers stuck to their task as McIver took 5-166 from 35 overs and Wyatt steamed in to take 4-77 from 25 overs in the sun.

Shropshire openers Ali and Leach, having safely negotiated Sunday’s final session, then set about eating into Herefordshire’s advantage with an excellent opening stand of 215 in the Whitchurch heat on the second morning.

Shropshire’s record partnership for any wicket against Herefordshire was finally ended when Leach was trapped lbw by Hage for 77.

Ali followed him back to the pavilion just before lunch when he was stumped by Bullock off Pardoe for 141, from 192 balls, a fine knock which featured five sixes and 17 fours. It was Ali’s highest score for the county, beating the 123 he struck against Cornwall at Shrewsbury in 2013.

Parton added a fluent 50 and Fynn looked set for a debut half century until he was removed for 47 as Shropshire fell away from 306-2 to 367 all out after lunch, a deficit of 25 runs.

Herefordshire then set about building a significant advantage with Burgoyne completing his century just before the close after putting on 190 for the second wicket with Whittock, who just missed out on three figures when he fell lbw Wyatt for 96.

Then came an eventful final day with Carrasco ultimately digging in to earn Shropshire a second draw in a row in the Western Division.

Pictured: Joe Carrasco ended unbeaten on 55 as Shropshire and Herefordshire both collected 12 points from a draw.