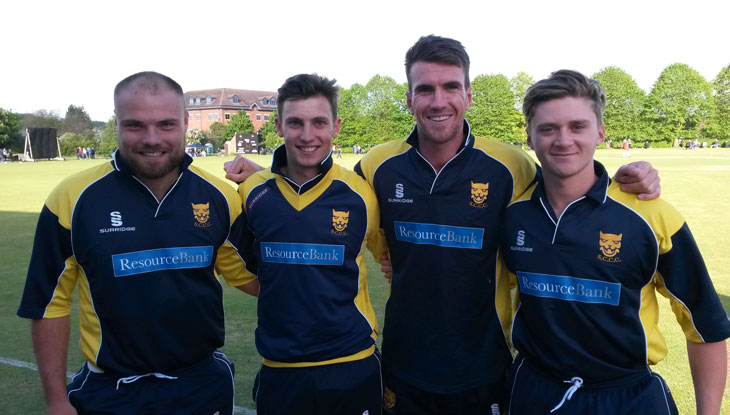 Shropshire chairman Toby Shaw insists the county are proud to have played a part in helping England Lions new boy Joe Clarke – Shropshire’s youngest ever player – progress to the international stage.
Clarke, who has previously represented England at under-19 level, has been named in the Lions squad which will take on Pakistan A in five Twenty20 matches in the United Arab Emirates between December 1 and 17.
The highly-rated 19-year-old Worcestershire star will spend three weeks ahead of the games at an England Performance Programme batting and spin camp in Dubai, with Clarke the youngest member of the travelling Lions party.
Clarke, from Trefonen, near Oswestry, has a place in the Shropshire record books as the county’s youngest ever senior player having made his Minor Counties Championship debut against Berkshire a few weeks after his 16th birthday during the 2012 season.
Progress has since been swift for the top order batsman, who is also a talented wicketkeeper, and he’s enjoyed an excellent breakthrough season for Worcestershire in the first division of the County Championship, scoring centuries for the New Road club against Gloucestershire and Sussex .
Clarke, who still plays club cricket for Oswestry when he has the chance, turned out for Shropshire in the county’s opening three Unicorns Trophy matches this season, hitting a splendid century against Northumberland at Oswestry’s Morda Road ground in early May.
“It’s phenomenal news that Joe has been called up by England Lions and he’s such a nice lad,” said Shropshire chairman Shaw. “It gives me a lot of pride that here’s a young lad with tremendous talent which has now been recognised at England level and long may it continue. We all wish him really well.
“He made his debut for Shropshire just after he turned 16. I remember we had a players’ dinner in the evening during the game at Berkshire and Joe sat at the end of the table. It’s fantastic how well he’s done since then and it’s great recognition for all his hard work.
“As a county club, we should be immensely proud in what we’ve achieved in giving young players like Joe an opportunity.
“You’re very much in the shop window when you do well, like Joe has in professional sport, and England are looking to develop their squad. They are seeking bright, young players who they want to invest time in going forward.
Clarke’s selection for the England Lions squad comes hot on the heels of Nottinghamshire batsman James Taylor, another former Shropshire player, being picked for the England Test squad to face Pakistan in the United Arab Emirates.
A number of Clarke’s Worcestershire team mates have also progressed to the first class game via successful spells playing for the county with Joe Leach, Jack Shantry, Ed Barnard and Richard Oliver all Shropshire old boys.
Brian Foxall, Shropshire’s chairman of selectors, added: “We’re delighted about Joe’s rapid progress into international cricket. He’s enjoyed a fine season for Worcestershire after starting it by making an excellent century for Shropshire.”
Clarke’s brother, Robbie, has also played regularly for Shropshire in recent seasons.
Stuart Dunn
Pictured: England Lions new boy Joe Clarke, right, with some of Worcestershire’s other Shropshire old boys, from left, Joe Leach, Jack Shantry and Ed Barnard.
http://www.shropshireccc.co.uk/wp-content/uploads/2015/05/4-Worcs-boys-for-Shropshire.jpg 415 730 Brian Foxall http://www.shropshireccc.co.uk/wp-content/uploads/2013/12/SCC-Website-Logo-340x156-WhiteText.png Brian Foxall2015-09-18 11:57:322015-09-18 13:00:36Joe Clarke’s England Lions call-up.
Championship Averages 2015