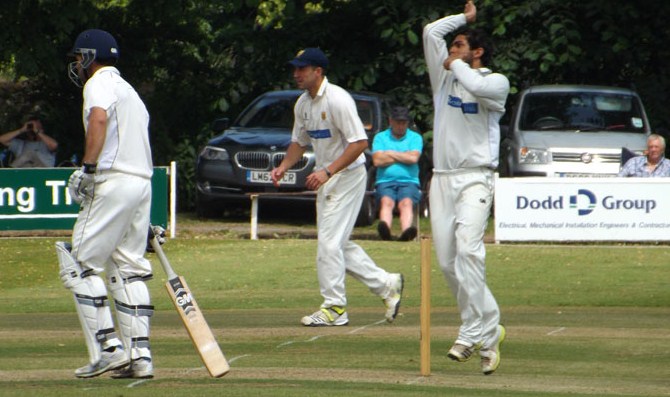 Randhawa, the former Yorkshire man, claimed 13 wickets in the match at Exeter as Shropshire impressively beat Devon by 58 runs.

It means Shropshire still have a slim chance of being crowned Western Division champions ahead of their final game of the season against Wiltshire at Whitchurch between August 17 and 19.

Rain delayed the start of play on Tuesday’s third and final day in the west country until after lunch but there was still enough time for Devon to be dismissed for just 96 in their second innings to ensure the Shropshire revival continued following victories over Oxfordshire and Cornwall.

“The pros have been magnificent for us,” enthused Krikken, the former Derbyshire coach. “Gurman bowled brilliantly to take 13 wickets in this match after Ben Sanderson took 14 in the last game at Cornwall.

“But the rest of the team have also pulled their weight and the team were tremendous again. They played magnificently well as they have done in the last three games.”

James Ralph, the captain, opted to bat first on winning the toss and Shropshire’s openers Joe Carrasco (38) and Steve Leach (36) laid solid foundations by putting on 74 for the first wicket.

But 74-0 quickly became 75-3 and, despite a determined 50 from Bridgnorth’s Ryan Lockley, who faced 86 balls for his half century, wickets continued to fall steadily as Shropshire were removed for 197.

Much of the damage was inflicted by spinner Charlie Miles who claimed a career-best 6-73. He had never previously taken five wickets in an innings, even for Sidmouth, his club side.

Devon, in reply, were undone by another stunning effort from Randhawa, 22, Shropshire’s consistent left-arm spinner, whose fine season continued with an eye-catching return of 7-53 from 27.5 overs.

His former Yorkshire team mate Sanderson also got in on the act by taking 2-46 from 22 typically lively overs.

Shropshire hoped to push on in their second innings and establish a significant lead, but that’s not how it quite turned out as they were removed for 132 on a tricky wicket.

A number of batsmen made starts without going on to deliver a truly telling contribution. Randhawa, at No 7, top scored with 30 while Leach (28) and wicketkeeper Simon Gregory (26) also chipped in.

That left Devon chasing 155 for victory and they ended day two on 3-1 after Sanderson struck with the final ball of a rain-interrupted day by trapping opener Rob Holman leg before.

Rain on the final morning eventually cleared to allow the match to resume after lunch with Randhawa stepping into the spotlight once again.

Krikken rated his efforts in the second innings even better than in the first as he claimed 6-45 from 17.2 overs, fittingly sealing victory when he had Miles caught behind by Gregory.

Skipper Ralph (2-5) and Sanderson (2-18) did the rest to seal another highly rewarding display from ever improving Shropshire.

Randhawa’s efforts – his match figures were 13-98 – guaranteed him top billing, but coach Krikken insisted Shropshire’s victory was down to a complete team effort.

“I’m really proud of how the lads have played the last three games,” he said. “I told them overnight going into the final day that we’ve got 60 too many for them and it proved to be the case.”