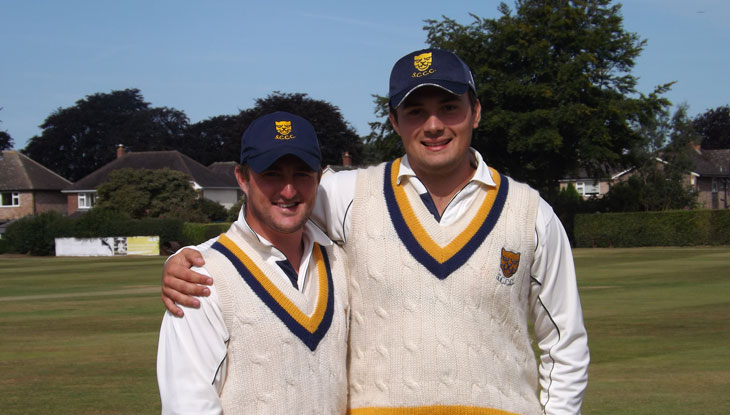 Steve Leach and Ryan Lockley were in record-breaking mood as Shropshire’s cricketers ended their Unicorns Championship season just as they started it by easing to a convincing victory.
Devon, the Western Division’s bottom side, had no answer to a dominant Shropshire display as they were swept aside by 10 wickets before lunch on day three at Shrewsbury’s London Road ground to ensure the hosts signed off their three-day campaign in style.
It was the county’s second win in six Championship matches having opened the season with a resounding victory by an innings and 150 runs over Cheshire at Whitchurch in June.
The highlight against Devon was a stunning partnership of 265 for the second wicket in the first innings between Shrewsbury’s Leach, their star turn with the bat this season, and Bridgnorth’s Lockley.
Their efforts eclipsed the county’s previous best second-wicket stand of 230 by John Foster and former Lancashire star John Abrahams against Buckinghamshire at Wellington in 1990.
“Leachy’s been great all year without getting three figures before,” said Shropshire coach Karl Krikken. “It’s the first time he’s done that this year and it was a big one, probably one of the highest scores from a Shropshire batsman. Ryan Lockley also got a big hundred so it augurs well for next year.”
Krikken added it was the perfect way for Shropshire to end their Championship season with spinner Gurman Randhawa claiming 10 wickets in the match while he was also pleased how young debutants Charlie Home and Will Cook settled into the side.
He said: “It’s been a very good last three days with Leachy and Ryan scoring the runs, Gurman coming up with the wickets and young Charlie Home also bowled very well in both innings.
“We decided to play a couple of the youngsters with Cooky coming in as well as Charlie and they looked the part, so it’s been a good three days all round.
“With regards to the year, it’s been a little bit disappointing in respect that I think we’ve had hold of every game that we’ve played in. We’ve bossed four of the six but unfortunately only won two.
“It’s been one of those seasons really, but I think we’re heading in the right direction with regards to the way that we play the game and the structure the players take out on to the field.”
Devon opted to bat first on the opening day and half centuries from Max Curtis (52) and Matt Golding (51) helped them put 274 on the board against a Shropshire attack again without opening bowler Ben Sanderson, playing for Northamptonshire against the Australian tourists.
Randhawa, Shropshire’s leading wicket taker this season, claimed 4-93 from a marathon 34.5 over stint while fellow spinner, young Shifnal debutant Home, made an instant impact by taking 3-70.
Shropshire, in reply, quickly lost Omar Ali but that only served to bring Leach and Lockley together and they joined forces to take apart the Devon attack.
The impressive partnership had reached 265 when Lockley fell for 117 – his first Shropshire century – which came off 219 balls and included 14 fours.
But Leach, playing on his home ground, continued to keep the scoreboard ticking over before eventually falling for a brilliant 170, his highest score for the county.
Leach spent just over five hours at the crease and faced 235 deliveries, hitting two sixes and 19 boundaries.
A Devon fightback with the ball, spearheaded by Zak Bess (5-82), saw Shropshire lose their final seven wickets for 51 runs as they were bowled out for 385, establishing a lead of 109.
Devon’s batting frailties were again exposed in their second innings as they ended day two on 147-7, once more struggling against the spin of Randhawa and Home, son of former county batsman Ed.
The third and final morning brought little respite for the visitors with Devon dismissed for 183 inside the opening hour as Randhawa ended with figures of 6-48.
It gave the ex-Yorkshire spinner overall match figures of 10-141 and lifted his total of Championship wickets for the season up to 33.
That left Shropshire chasing 73 for victory and they soon raced to their target inside just seven overs as Ali struck a quickfire, unbeaten 58 – five sixes and four boundaries – with Leach this time content to play the supporting role as he ended the Championship season with an excellent 702 runs to his name.
“We want Omar to be positive because he just takes games away from other sides,” added Krikken. “He’s come off a couple of times and when he hits it, it stays hit.”
Pictured – record breakers Ryan Lockley & Steve Leach
Stuart Dunn
http://www.shropshireccc.co.uk/wp-content/uploads/2015/08/Devon-at-Shrewsbury-2015-02.jpg 415 730 Brian Foxall http://www.shropshireccc.co.uk/wp-content/uploads/2013/12/SCC-Website-Logo-340x156-WhiteText.png Brian Foxall2015-08-18 14:42:312015-08-18 14:42:31Leach and Lockley smash record in big Shropshire win
Opportunity knocks for two more youngsters