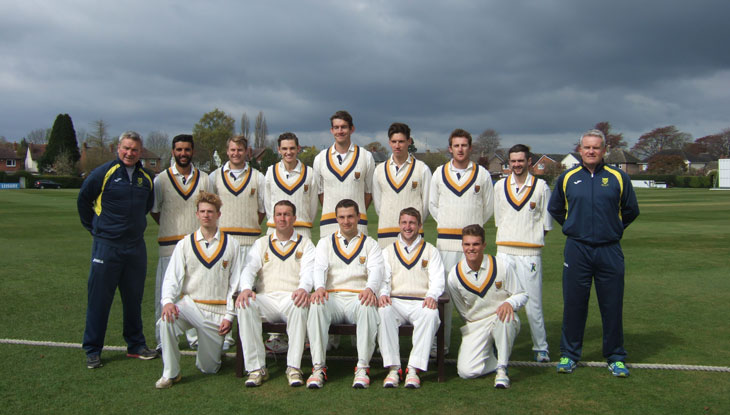 New Shropshire captain Steve Leach admitted “we’ve had a bad day at the office” after the county opened their season with a disappointing seven-wicket defeat against Herefordshire in the Unicorns Trophy.
Shropshire’s below par total of 130 at Shrewsbury’s London Road ground never looked likely to be enough to usher in a winning start to the campaign – and so it proved as the visitors eased to victory inside 31 overs with plenty of time and wickets in hand.
Leach will now be seeking a positive response when Shropshire play their second group game against Wales Minor Counties at Abergavenny on Sunday.
Leach pointed to losing the toss as “important” and Shropshire found runs hard to come by as they stumbled from a promising 79-2 to 95-8.
A late flourish from experienced wicketkeeper Anthony Parker, who cracked 27 down the order, boosted the score, but opener Richard Oliver, who top scored with 30 on his Shropshire return after two years in the first-class game with Worcestershire, and Omar Ali (21) were the only other men to pass 20 for the hosts.
“We lost an important toss,” said Leach. “I think it was a little bit green, a little bit soft the pitch this morning. I didn’t think the ball really came onto the bat as well as it might have done. It’s difficult to play shots and you could see with some of the dismissals that was the case.
“Credit to the Herefordshire bowlers as they bowled well. They bowled a lot of dot balls. They bowled well as a partnership and then the spinners bowled really well in the middle overs and we went from being 70-2 to 90-7, 90-8.
“It’s not really acceptable from the calibre of players we’ve got in our team, but we had a good chat about it afterwards and the guys are aware of that. I think we can learn a lot from it.
“It’s just disappointing that we didn’t quite get as many runs as we could have done. I think another 20 runs or so, another 30 runs, it would have been a lot more of a challenge for them in the run chase.”
Former Derbyshire offspinner Peter Burgoyne inflicted much of the damage with the ball, taking 4-27 from 10 overs, as he bowled the visitors into a strong position on his Herefordshire debut.
Shropshire needed early wickets to make a game of it and Ross Aucott removed visiting skipper Matthew Pardoe for nine. It quickly became 34-2 when towering paceman Alex Wyatt marked his county debut following his arrival from Leicestershire by getting rid of Neil Pinner, another Worcestershire old boy in the Herefordshire ranks.
But only one more wicket – taken by Shrewsbury youngster Henry Blofield – fell as Herefordshire made assured progress to 131-3, with Dave Ball (40no), Liam Gwynne (38) and Chris Whittock (24no) seeing the job through for the happy visitors.
“I thought our bowlers bowled well,” added Leach. “Alex Wyatt was a real positive up top, bowling 10 overs for 1-35, and he was unlucky as that could have easily been three or four.”
Stuart Dunn
http://www.shropshireccc.co.uk/wp-content/uploads/2016/04/Team-v-Herefordshire-24-apr.jpg 415 730 Brian Foxall http://www.shropshireccc.co.uk/wp-content/uploads/2013/12/SCC-Website-Logo-340x156-WhiteText.png Brian Foxall2016-04-24 17:51:542016-04-24 17:51:54Leach seeking positive reaction after county open season with home defeat
New skipper Steve Leach is excited to be leading Shropshire for first time