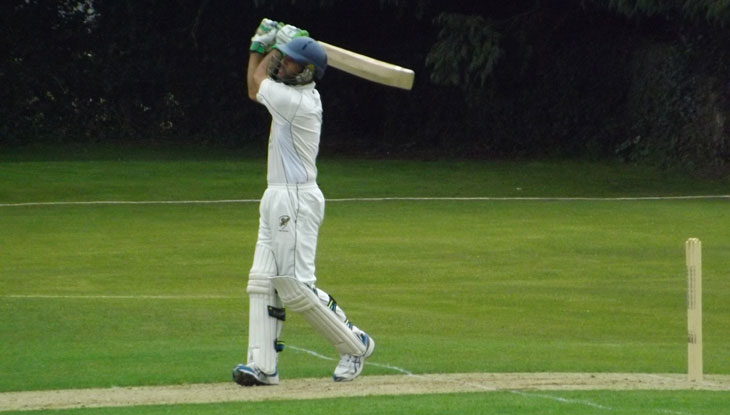 Big-hitting Shropshire batsman Omar Ali insists the county are determined to launch their Unicorns Championship Western Division season in style ahead of this weekend’s opener at home to Dorset.
The three-day game gets under way at Whitchurch on Sunday, with Ali looking forward to returning to Heath Road, a ground he knows well from spending three seasons as a Whitchurch player earlier in his career.
Ali, the younger brother of Worcestershire and England star Moeen, admits Shropshire failed to do themselves justice in losing three of their four Unicorns Trophy games in the early weeks of the season as they suffered an early exit from the one-day competition.
But he’s hopeful the three-day game will suit Shropshire much more as they prepare to take on Dorset.
“We’re looking to get a win to start off the competition,” said Ali, part of the Shropshire side which enjoyed the better of a draw against Dorset at Bournemouth last July. “After our performances in the one-dayers, we were really disappointed, so we’re all raring to go for the three-dayers.
“Before the one-day competition started we were all positive. We thought we had a good side to make it through to the next round, but it wasn’t to be, so we’ve got to concentrate on the three-dayers now and start with a positive result.”
Ali, 27, believes Shropshire have the talent to enjoy a successful campaign with this season’s side bolstered by the arrivals of new professionals David Wainwright and Alex Wyatt.
He said: “David Wainwright is a class player. He’s represented England Lions, so he’s a really good asset to our team and we’ve got a quality bowler in Alex Wyatt as well.
“I think the team is pretty strong for the three-day competition. We’ve got a really good balance and I think we’ve got a lot of things covered with our three-day side.”
Ali added he’s excited about returning to Whitchurch given his affection for the club from representing them for three seasons, two of them as captain, in the Birmingham League.
“I spent three good years at Whitchurch and I really enjoyed my time playing there,” he said. “The people involved at Whitchurch are really nice so it will be good to go back there and play against Dorset.
“It is a really good cricket wicket. It’s not the biggest of grounds, so as a batsman if you get in you can cash in, but also if you’re a bowler, as we saw last year when we played our first Championship game there against Cheshire, Ben Sanderson took six and five wickets in the two innings, so if you bowl well then you do get your rewards.”
Ali, now one of the longest-serving players in the current Shropshire side, stressed he’s always proud to represent the county and hopes to make another positive contribution this season playing under new captain Steve Leach.
He said: “When Ed Foster was captain about four or five years ago he asked me if I wanted to play for Shropshire when I first moved to Whitchurch. I enjoy it and I enjoy the company of the lads as well. It’s a good set up at Shropshire.”
The first ball will be bowled at Whitchurch at 11am on Sunday with admission free for spectators on all three days.
Stuart Dunn
Pictured: Omar Ali – pictured in action at Abergavenny – hoping Shropshire make a flying start to their Unicorns Championship campaign at Whitchurch, his former home club ground.
http://www.shropshireccc.co.uk/wp-content/uploads/2016/05/Omar-Ali-Wales-1-May-2016.jpg 415 730 Brian Foxall http://www.shropshireccc.co.uk/wp-content/uploads/2013/12/SCC-Website-Logo-340x156-WhiteText.png Brian Foxall2016-06-01 13:16:162016-06-01 13:16:16Omar Ali heads back to Whitchurch as Shropshire host Dorset
Shropshire’s Trophy campaign ends with defeat at Staffordshire

Debut for keeper on home ground
Scroll to top