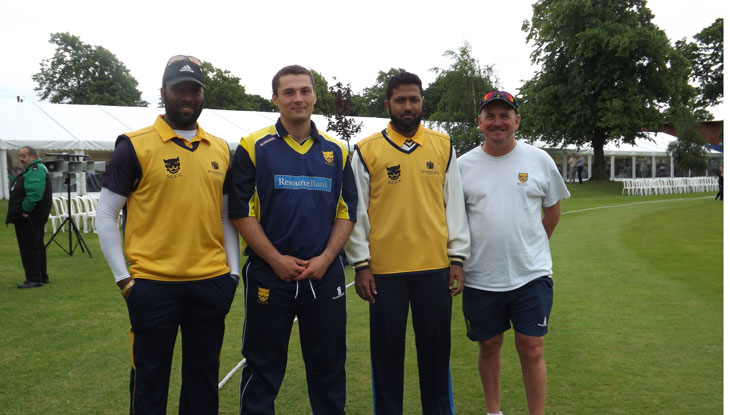 Delighted Shropshire CCC chairman Toby Shaw hailed the club’s tenth ResourceBank Challenge day, which featured international cricket stars, a huge success.
The sold-out event, Shropshire’s popular annual fund-raiser, attracted more than 700 guests from the county’s business community to Wrekin College, where they enjoyed hospitality and entertainment in a luxury marquee on the edge of the boundary as Shropshire played two T20 matches against an international Invitation XI.
Former West Indies paceman Corey Collymore and ex-India Test batsman Wasim Jaffer were the two biggest names on parade as they helped their side to victory in both games against the county.
“It was a fantastic day,” said Mr Shaw, the event organiser. “We were delighted to have more than 700 guests and once again it exceeded all expectations. The day was a real triumph.
“There was a great atmosphere, which there always is, and the feedback received was excellent. It’s a very unique experience for Shropshire people each year and the event goes from strength to strength thanks to the continued support of the local business community.
“We had some wonderful items to auction, which attracted some very generous bids, and there was some top class cricket played, so it really was a memorable day.”
The opening T20 match saw the Invitation XI emerge as 90 run winners. South Australian under-19 batsman Connor Dudley (71) and Newport’s Indian star Rajat Bhatia (64) helped them post 188-5 before Shropshire were dismissed for 98.
Shropshire batted first in the second match and accumulated 126-6, with Omar Ali top scoring with 42. Muhammad Fayaz led the way with an unbeaten 66 as the Invitation XI progressed to 127-3 in the 18th over of their chase, with promising 13-year-old Ben Lees, the son of county secretary Richard, keeping wicket for Shropshire.
Indian ace Jaffer, who hit a century for the Invitation XI at Wrekin College last year, stressed it’s an event which all the players enjoy being involved.
He said: “You play with a lot of people you know from around the leagues and you meet the other professionals as well, so it was good to be back for a third year. It was a lovely day.
“There’s wonderful facilties, a lovely ground, a lovely school as well, so it was good to be here again.”
As well as it being Shropshire CCC’s main fund-raiser of the year, the club also make a donation from the proceeds to nominated charities, which this year are NSPCC, the Renal Unit at the Royal Shrewsbury Hospital and Beanstalk, a national charity that recruits and supports volunteers to work with primary school children struggling with their reading.
Stuart Dunn
Pictured: Former West Indies star Corey Collymore, Shropshire captain Steve Leach, ex-India Test batsman Wasim Jaffer and Shropshire’s director of cricket Karl Krikken at the ResourceBank Challenge day at Wrekin College.
http://www.shropshireccc.co.uk/wp-content/uploads/2016/07/ResourceBank-Day-2016-012.jpg 415 730 Brian Foxall http://www.shropshireccc.co.uk/wp-content/uploads/2013/12/SCC-Website-Logo-340x156-WhiteText.png Brian Foxall2016-07-09 11:36:112016-07-09 11:36:11Overseas stars add sparkle to Shropshire CCC’s successful hospitality event
Development XI to face strong Academy sides at Shrewsbury School festival