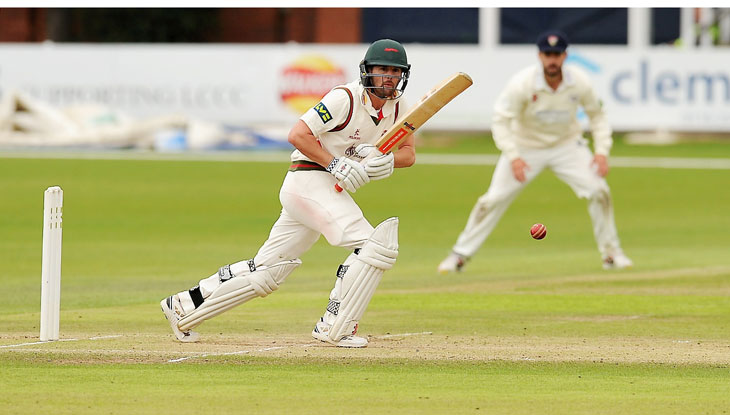 Shropshire have signalled their intent to challenge for honours in the Unicorns Championship next season by signing local lad Dan Redfern, the former Derbyshire and Leicestershire star.
Shrewsbury-born Redfern, 25, is the second exciting addition to the Shropshire squad from the first-class game in quick succession following the county’s move last week to bring in experienced left-arm spinner David Wainwright, a former Derbyshire team mate.
Redfern, a former England under-19 international, played for Shropshire earlier in his career, representing the county from under-10 to under-17 level before scoring a century on his senior debut against Northumberland at Oswestry as a 17-year-old in 2007.
He made his first-class debut for Derbyshire a year earlier aged 16 and remained at the club until 2014 when he signed for Leicestershire, spending the last two seasons at Grace Road.
Redfern, a top order batsman and talented offspinner, said he was pleased to have signed for his home county – he grew up at Tibberton, near Newport – and stressed he’s looking forward to working once again with Shropshire’s Director of Cricket Karl Krikken, his former coach at Derbyshire.
Redfern said: “Krikk’s been a massive influence on me since I first met him when I was a 13-year-old in the Derbyshire Academy. I’ve got a lot of time for him and I respect him a great deal.
“He’s such a good guy so to have him at Shropshire it felt like a no-brainer for me to sign. I’m really looking forward to playing for Shropshire and working with Krikk again as he loves his cricket and loves coaching.”
Redfern, who averaged just under 30 with the bat in 79 first-class appearances, will combine representing Shropshire with playing club cricket for Staffordshire side Leycett, with whom he has a long association.
“I’ve only played one senior game for Shropshire and it was a really good experience,” he added. “I’m looking forward to playing with David Wainwright again and I know a few of the other lads like James Ralph and Steve Leach.
“I spent time with Steve a couple of years ago at the Darren Lehmann Academy in Australia and he’s a good player.
“I think we’ve got a good side. I know Shropshire finished third in the Championship last season, so hopefully we can go a couple of steps further and see if we can challenge.
“I’ll be heading down to the pre-season nets early in the new year and it will be good to meet everyone.”
Krikken said he’s excited that Shropshire have managed to add Redfern, a player he rates highly, to their squad for the 2016 season.
“It’s great that a local lad is coming back to play for Shropshire,” he said. “He can certainly play the game and he’s a prodigious talent.
“I think he will get a lot of runs at this level and he’s also a handy offspinner, so he’ll add nicely to the signing of David Wainwright and what we’ve already got.”
Shropshire chairman Toby Shaw added: “We’re very pleased to have secured Dan’s services. He’s a Shropshire lad and has a close affiliation with the county.
“He had no hesitation in coming to rejoin us and, as with David, he will bring a professional approach and some solidity, both from his batting while also offering us some bowling options as well.
“I can well remember watching him score a hundred for the county at Oswestry earlier in his career and he’s another very good signing.”
Stuart Dunn
Picture: Shropshire’s new signing Dan Redfern. Picture courtesy of Derby Telegraph.
http://www.shropshireccc.co.uk/wp-content/uploads/2015/12/Dan-Redfern.jpg 415 730 Brian Foxall http://www.shropshireccc.co.uk/wp-content/uploads/2013/12/SCC-Website-Logo-340x156-WhiteText.png Brian Foxall2015-12-15 14:14:492015-12-22 10:20:46Redfern returns home to sign for Shropshire
2016 Fixtures