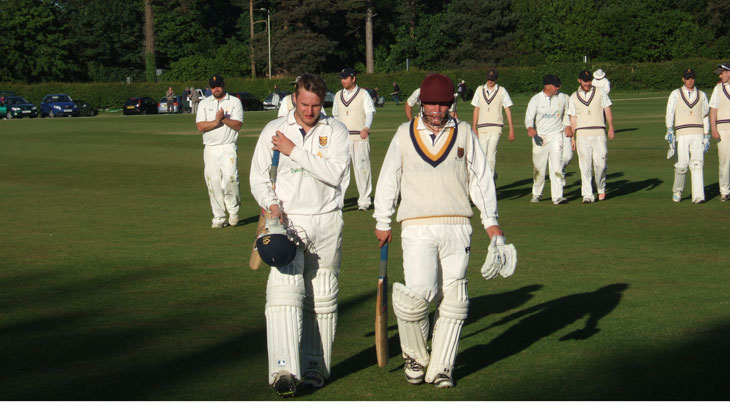 Shropshire’s cricketers wrapped up an emphatic victory over Cheshire inside two memorable days as they enjoyed a stunning start to their Unicorns Championship campaign.An 11-wicket match haul from paceman Ben Sanderson laid the foundations for a resounding victory by an innings and 150 runs at Whitchurch’s Heath Road ground.

While Sanderson’s contribution with the ball was immense, it was a record-breaking match for Shropshire youngsters Tom Weston and Ross Aucott as they set a new county eighth-wicket record partnership of 177 which really took the match away from Cheshire as the hosts established a first innings lead of 258 runs.

The previous best Shropshire stand for the eighth wicket was 129 by Matt Turner and Adam Shimmons against Oxfordshire at St Georges in 1998.

Bridgnorth batsman Weston, 20, cracked a polished 105, his maiden century for Shropshire, and Aucott, 19, was unfortunate to just miss out on three figures when he was run out for 91.

The convincing team performance was just the boost Shropshire were seeking following a disappointing Unicorns Trophy which included a 95 run defeat at the hands of Cheshire at Nantwich at the end of April.

But coach Karl Krikken always felt Shropshire’s strengths lay in three-day cricket and his players quickly backed up his theory by producing a dominant performance.

“It’s been a long time since we’ve beaten Cheshire,” said Brian Foxall, Shropshire’s chairman of selectors. “The dressing room was buoyant afterwards but Karl will ensure no-one gets carried away.

“It will give the side self belief that we can do well in the Championship this season, but we’ve still got to perform in the other matches.”

Sanderson soon turned the screw once Cheshire opted to bat first on winning the toss with the visitors having no answer to the former Yorkshire man who quickly reduced them to 7-3.

Sanderson eventually ended up with 6-39 from 13 overs as Cheshire were dismissed for 100 inside 38 overs.

He was well backed up by debutant Matt Higginbottom, who previously played under Krikken at Derbyshire, who claimed 3-33, while Gurman Randhawa bowled nine tight overs for 1-8.

Shropshire, in reply, also initially found runs hard to come by although Steve Leach, the Shrewsbury opener, laid reasonable foundations with a determined 31.

But Shropshire were a precarious 140-7 when Weston was joined in the middle by Aucott and the duo batted the home side into a commanding position with a glorious partnership of 177.

Aucott, at No 9, perished nine short of a richly deserved ton, facing 120 balls for his 91, a sparkling knock featuring a six and 14 fours.

But Weston did reach three figures as he hit 105, from 180 deliveries, including 17 boundaries. His previous highest score for the county was 25.

Higginbottom then cracked a quickfire, unbeaten 30 to lift the Shropshire total up to 358-9.

“Both Tom and Ross batted superbly,” said Foxall. “They batted really sensibly and Ross also deserved to get 100 so it was unfortunate he was run out.”

Cheshire struggled just as much with the bat in their second innings as they were blown away for 108. Sanderson again inflicted much of the damage, claiming 5-19 to give him overall match figures of 11-58 from 24 overs.

Spinner Randhawa also got in on the act by taking 4-35 with victory wrapped up midway through the second afternoon.

Foxall added: “We expected Cheshire to bat better in their second innings but they were soon undermined by Ben Sanderson again who bowled superbly.

“He bowled as well as he did when he took 14 wickets against Cornwall down at St Austell last season. The ball did a bit but you’ve still got to put it in the right place and that’s what he did.”

Shropshire’s next three-day match is against Herefordshire at Eastnor, starting on Sunday, June 21.