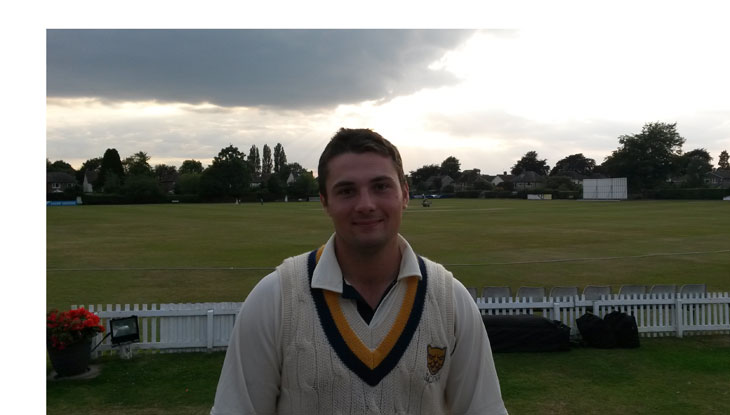 Shropshire County Cricket Club have appointed promising opening batsman Steve Leach as their new captain.
The 21-year-old Shrewsbury player, a consistent run scorer at the top of the order, replaces the experienced James Ralph, who led Shropshire to third place in the Western Division of the Unicorns Championship this year.
Leach, the younger brother of Worcestershire allrounder Joe, scored more than 700 Championship runs for the county during the 2015 season. He made his Shropshire debut at the age of 17 in 2011.
“We’re delighted with the appointment,” said Toby Shaw, the Shropshire chairman. “Steve has shown great maturity at a young age and I see him taking the side forward.
“We’re grateful to James Ralph for what he has achieved for Shropshire and we hope he will continue to play for the county.
“Steve’s clearly got the passion and he’s very proud to have been offered this role. I think he will absolutely blossom and bring the team along with him. We’re very excited and we want some success which Steve recognises the importance of achieving.
“He had an unbelievable season, both for the county club and also for Shrewsbury in helping them win the Birmingham League title again. This will now be the next step up for him and I fully expect him to embrace it.
“He’s got great qualities, not only his playing ability, but he commands tremendous respect among all the players.”
Leach scored his maiden first class century in April, reaching three figures for Oxford MCCU against a Surrey side including Kevin Pietersen.
He said he’s delighted to have been asked to take over the county captaincy and is looking forward to the challenge.
“It’s a massive honour,” he confirmed. “I’ve always had a lot of pride playing for Shropshire and I’m really excited.
“I enjoyed playing under James Ralph, someone I’ve got a lot of respect for, and hopefully he will still be a part of the side moving forward with his experience.
“It’s been an ambition of mine to one day captain Shropshire and I’m delighted it’s now happened. The aim now is to win things.”
Leach, a former Shrewsbury School pupil who is studying business management with sport at Oxford Brookes University, stressed he’s encouraged by the crop of talented youngsters that have made the most of their chance to impress in the senior Shropshire side.
He added: “I’ve spoken to Toby at great length and we honestly think we’re not far away from having a really good side. We finished third in the Championship this season when we had the frustration of drawing a couple of games we might have won.
“I believe we’ve got the nucleus of a good side, players that would get in any other Minor Counties side, and these players have a big part to play in what we want to achieve in the future.”