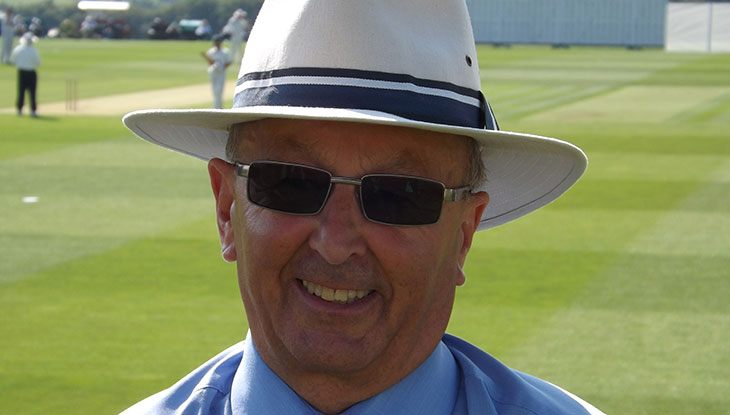 Shropshire CCC chairman Toby Shaw has led the tributes to Brian Foxall and thanked him for his dedicated service to the club after he decided to retire from his role as chairman of selectors.
Brian, who was also Shropshire’s vice-chairman, matchday announcer and edited the club’s annual handbook, feels the time is now right to start to spend more time with his family each summer.
He had been chairman of selectors for the last three years and a committee member for more than 10 years after joining at the invitation of the club’s former chairman Bryan Foulkes.
Toby said: “Brian’s done a fantastic job for the county and, while we completely understand and respect his decision to retire, we are very sad to see him go.
“He’s a lovely chap, very hard working and he’s been a fantastic servant to the county club. People probably don’t appreciate just how much he has done in his many different roles, but he’s been tremendous for Shropshire.
“He has a real knowledge of the game and of players, while he has always done an excellent job keeping specators informed on the tannoy at matches – not many Minor Counties clubs offer such a fine service.
“His work in editing the handbook each year has also given Shropshire a publication envied by other counties.
“He will certainly be a hard act to follow, but we will look forward to welcoming him to games and wish Brian a long and happy retirement.”
Brian stressed he had enjoyed his involvement with Shropshire CCC and had made many friends both within the county and further afield following the club around the country.
“It’s been a big part of my life and I’m very grateful for my involvement with Shropshire CCC,” he said. “I’m not a local as I’m originally from Birmingham but I was accepted so readily into the Shropshire fold.
“I’m immensely gratetul to Shropshire cricket. It was Eric Lomas, when I first started appearing on Shropshire cricket grounds and then at county matches, that encouraged me to get involved.
“I first did the matchday announcing for a NatWest Trophy tie against Somerset at St Georges in 2000 – James Ralph scored a century – and was then invited on to the committee before becoming chairman of selectors three years ago.
“I’ve enjoyed it and meeting so many people from all around the country over the years has been very nice. It’s also been lovely to meet so many cricketers and see lots of lads, not just from Shropshire but other Minor Counties, make their name in first-class cricket.
“I wish Shropshire every success in the future and still plan to watch them play whenever I have the opportunity.”
Stuart Dunn

Pictured: Brian Foxall – a loyal servant to Shropshire CCC for many years.