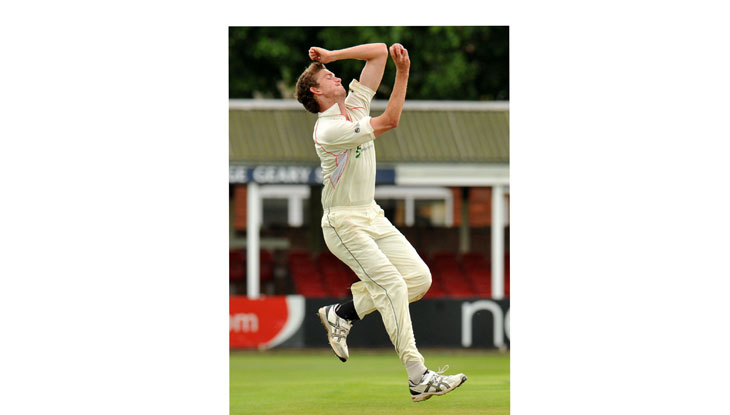 Shropshire have added to their bowling options on the eve of the new season by signing towering former Leicestershire right-arm seamer Alex Wyatt.
Six-foot-seven tall Wyatt spent seven years as a member of Leicestershire’s first team squad after progressing from the Academy ranks at Grace Road.
Having just returned to England from six months in Australia playing for Melbourne-based club Hoppers Crossing, he’s now looking to make an impact for Shropshire.
“Playing in Australia for six months has certainly helped coming back into the nets in England,” said Wyatt, 25. “I’m looking forward to playing for Shropshire and I’m up to speed with the one-day and three-day competitions while I’ve also heard a lot of good things about the strength of the squad.”
Wyatt, who will combine representing the county with playing club cricket for Ticknall in the Derbyshire Premier League, is keen to help Shropshire gain success while he also has ambitions of ultimately pushing for a return to the first-class game.
He added: “I’m going to enjoy playing for Shropshire and I’ve not played Minor Counties cricket before. Hopefully it’s a way of having a first-class career again and if that is to happen I know I’m going to have to prove my worth for Shropshire by taking wickets and scoring a few useful runs down the order – but the main thing is the team is competitive.”
Wyatt took 57 wickets in first-class cricket at an average of 36.40 apiece while he also claimed 14 wickets with the white ball for the East Midlands club.
He made his first-class debut for Leicestershire in 2009, taking three wickets in his second match against the West Indies tourists, when his victims included Ramnaresh Sarwan, his future county captain.
Wyatt is unable to play in this weekend’s internal practice game for the Shropshire squad at Wrekin College but will be available when the county launch their competitive season against Herefordshire in the Unicorns Trophy at Shrewsbury’s London Road ground the following Sunday, April 24.
Karl Krikken, Shropshire’s director of cricket, stressed Wyatt’s arrival is particularly timely following the departure of paceman Ben Sanderson, a key man with the ball for the county in recent years, to Northamptonshire.
Krikken said: “Alex is a tall lad and I’ve seen him play a few times. He gets plenty of deep bounce and he hits the spot every time.
“He’s hungry, he wants to play at a high level, and this is a good chance for him to showcase his talents. Alex has certainly got the ability to do well.”
Shropshire chairman Toby Shaw added: “We needed to bring in a fast bowler, a strike bowler and it’s something we had been targeting. Through Karl’s connections we’ve managed to secure Alex and we’re very excited.
“He’s obviously very keen to get back in the first class game and sees this as a fantastic opportunity.
“I think he will also be able to help our young up and coming strike bowlers and hopefully they can work well in tandem with Alex.”
Stuart Dunn
Pictured: Shropshire new boy Alex Wyatt in action for former club Leicestershire. Picture courtesy of Leicester Mercury.
1 Attached Images
http://www.shropshireccc.co.uk/wp-content/uploads/2016/04/Alex-Wyatt-bowling-for-form.jpg 415 730 Brian Foxall http://www.shropshireccc.co.uk/wp-content/uploads/2013/12/SCC-Website-Logo-340x156-WhiteText.png Brian Foxall2016-04-11 09:22:412016-04-11 09:22:41Shropshire CCC sign towering paceman Alex Wyatt
Development XI gets under way

Final Preparations for 2016
Scroll to top