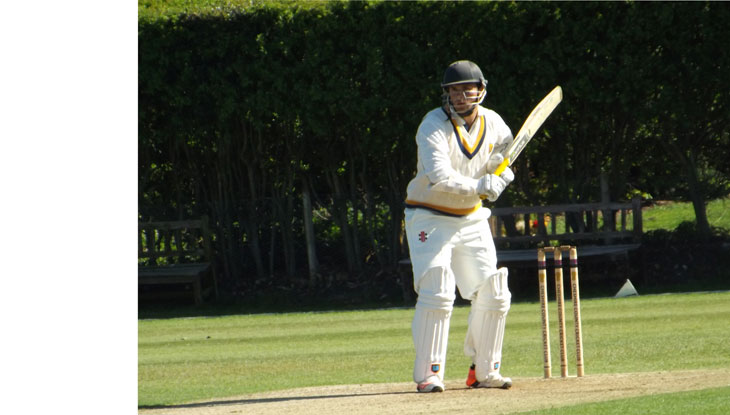 In an exciting game at Bridgnorth Shropshire went down by 2 runs to Wales despite appearing to have the upper hand on several occasions.

Wales won the toss on Sunday morning and elected to bat. Excellent bowling by Matt Higginbottom (5 for 57) well supported by Gurman Randhawa (3 for 47) restricted the visitors to 184 ao. Only number 3 batsman Sean Griffiths made any impression with 82, having been given a life before scoring.

Shropshire’s reply got off to a flyer, openers Steve Leach (72) & Omar Ali (41) putting on 77 in 10.1 overs before Ali fell to a catch on the boundary. There was only one other partnership over 50, Tom Weston (25) & Ross Aucott (70) adding 77 for the seventh wicket before Weston was one of 21 lbw victims in the match, in the last over of the day. Shropshire added 32 to there overnight total on Monday being all out 289, a handy first innings lead of 105.

The lead looked even handier as Gurman Randhawa took the first 5 wickets in Wales’ second innings before the deficit had been cleared. Wales then staged a recovery with great application and sensible batting led by teenager Connor Brown (115) & Daniel Lewis-Williams (57) as they finished the second day on 337 for 9. They added just 9 runs on the final morning to leave Shropshire a victory target of 242 in a minimum of 95 overs. Gurman Randhawa finished with 7 for 119 from a marathon 51.1 overs.

There was not the same rate of scoring as in first innings  but 41 from 10 .3 overs was quick enough but this time 2 wickets had fallen. There was then the highest partnership of the innings 73 for the third wicket between Steve Leach (65) & Will Parton (44). At lunch on the final day Shropshire were 122 for 4 and appeared to be well placed to push on to victory. Several batsmen got starts but nobody was able to convert it into a match winning score and Wales chipped away with there spinners doing most of the damage bowling Shropshire out just before tea for 239.

Pictured Steve Leach who scored 50 in each innings against Wales