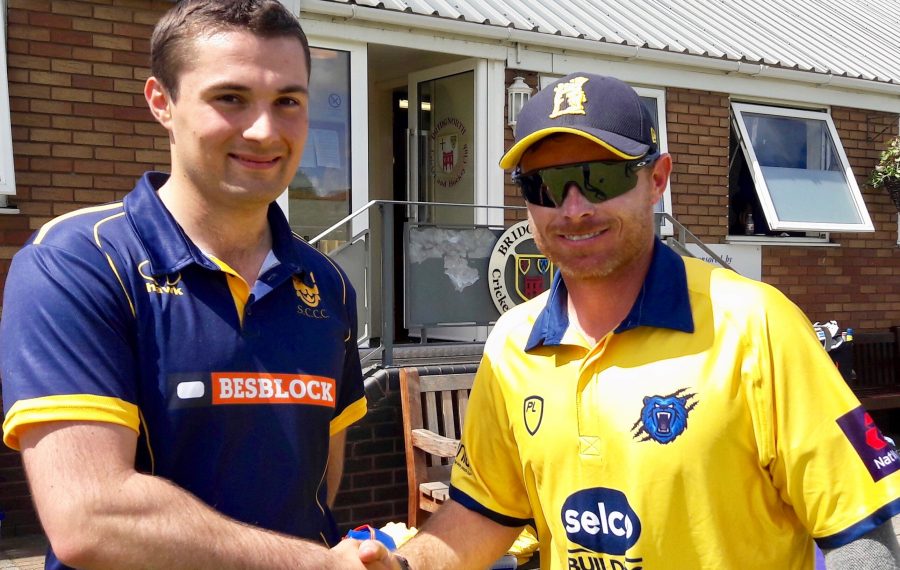 Captained by experienced England star Ian Bell, the Bears won the day’s opening match by 13 runs before also claiming victory in game two in front of a good-sized crowd, who enjoyed both the cricket and the lovely Bridgnorth sunshine.

“It’s great that Birmingham Bears agreed to come,” said Karl Krikken, Shropshire’s director of cricket. “It’s lovely for them to be here. It’s good preparation for them for their T20 campaign and it’s also a good standard for us to play against. It just shows what the lads have got to get to to be first-class cricketers.

“We gave a good showing of ourselves.”

Bell, who did not bat owing to a sore elbow, led the Bears in the field and enjoyed his first visit to Cricket Meadow.

He said: “It’s really important for us as we’re not a million miles away from our T20 Blast campaign, so obviously we want to get out there and play some cricket, and this is a great opportunity with great facilities. It’s nice to play some competitive cricket.

“We’ve had a lot of rain in the last week but it’s held up really well. It’s great that we could have two games and that we could bring the whole squad here and mix the teams up and go. It’s been very good.”

The Bears batted first in the day’s opening game and totalled 170-6 from their 20 overs. Ireland international batsman William Porterfield led the way with 68 before being caught on the boundary by Alex Wyatt off Shrewsbury youngster Dillon Pennington (2-32).

Ateeq Javid added an unbeaten 28 from just ten balls while spinner Jack McIver was the pick of the home attack, taking 3-23.

Shropshire, in reply, were well served with the bat by Connor Dudley and Ross Aucott as they set about their chase. Shifnal prospect Dudley played some big shots before being trapped lbw by Oliver Hannon-Dalby for 39, from 26 balls, hitting four boundaries and three sixes.

His club mate Aucott was also in good touch, making 36, and then a late flourish from Pennington saw him end unbeaten on 27 as Shropshire closed on 157-7.

Shropshire batted first in game two and were bowled out for 90 inside 18 overs. Jack Edwards, at No 7, top scored with 27, with Josh Poysden claiming 4-23.

To give the Bears some extra match practice, it was agreed they would chase 170, with Sam Hain (43), Rikki Clarke (34), Ed Pollock (32) and Porterfield (31) the chief contributors as they reached 170-6 with two balls to spare. They had moved past the Shropshire total for the loss of three wickets.

Ashley Giles, the sport director at Edgbaston, was another well known former England player to enjoy his visit to Bridgnorth.

He added: “It’s always quite nice for us to get away from Edgbaston as good a international stadium it is now. A change of scenery is sometimes good, so we’re delighted that Bridgnorth would have us here.

“It’s a great opportunity for us to hone some of our skills before T20 starts which quite often you don’t get the opportunity to do.”

Shropshire’s next match is a three-day Unicorns Championship clash against Herefordshire which gets under way at Whitchurch next Sunday, June 18.

Alex Wyatt hopes history repeats itself as Shropshire get ready to return to...
Scroll to top