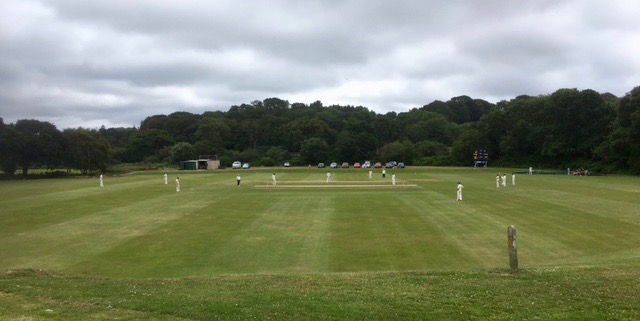 Shropshire claimed six points from a draw in their Unicorns Championship match at Cornwall after all bar the opening 90 minutes of the final day at St Austell was lost to bad weather.

Resuming 353 runs behind Cornwall after two testing days which were dominated by the hosts, the south west county were in the driving seat to press home their advantage and secure victory.

But Shropshire batted with determination for an hour and a half to move the score along to 167-7 – a deficit of 287 – before the players went off, initially for bad light, just after 12.30pm.

Persistent rain then ended Cornwall’s hopes of trying to pick up the last three wickets they needed to win as the match was eventually abandoned as a draw shortly after 6pm.

Karl Krikken, Shropshire’s director of cricket, said: “It started lightning and thundering nearby and it got really dark. It started spotting and the umpires quite rightly brought us off.

Having lost five wickets for just 12 runs towards the end of day two to leave them a precarious 101-6 overnight, Shifnal team mates Ross Aucott (31no) and Jack McIver put on 63 before McIver was caught by Brad Wadlan at second slip off Tom Dinnis for 25 shortly before the weather intervened to leave Cornwall frustrated.

Cornwall had set the tone for what was to follow during the match after electing to bat on the opening morning, recovering in style from losing two early wickets to Aucott, to post a competitive 349-5 from 90 overs.

Former Essex and Derbyshire all-rounder Greg Smith led the way with an unbeaten 127 as he put on 190 for the fifth wicket with Matt Robins (76). There were also half centuries for Tom Rowe (65) and opener Scott Harvey (54).

Shropshire, in reply, found runs harder to come by and, having been reduced to 66-6 by the end of the first day, the following morning brought little respite as they were removed for 123 inside 43 overs.

Cornwall surprisingly opted not to enforce the follow on and instead focused on scoring quick runs to build a commanding lead. An unbeaten 128, from 98 balls, from the impressive Wadlan, who shared in a third-wicket stand of 132 with Rowe (61), pushed the score along to 228-3 after 37 overs before the declaration arrived.

That left Shropshire an imposing victory target of 455.

They quickly lost skipper Steve Leach but Omar Ali and Will Parton dug in to frustrate Cornwall’s quest for wickets until opener Ali went for 53, caught by Wadlan off Smith, who took 5-50 from 43 overs.

From being handily placed at 89-1, Shropshire suddenly collapsed to 90-4 and then 101-6 at the close when Ryan Lockley became Smith’s fifth victim of the innings from the last over of another difficult day.

But then the weather ultimately took a firm grip to ensure Shropshire escaped with a draw and headed back up the M5 with half a dozen points, with Cornwall picking up 12 points.

“We got out of jail a bit,” added Krikken. “We were outplayed for the majority and but for a bad decision by them really to bat again it could have been different.

“But lads like Ali, Parton, McIver and Aucott played really well in the second innings. To bat for 96 overs showed that we can apply ourselves. If we had shown that application in the first innings, we would have had a game on our hands.

“The last two matches with the bat, the performances in the first innings have been really good, getting 380 and 370, so you’re quite pleased with that, but ultimately we didn’t play well at Cornwall.”

Shropshire will make a quick return to the south west for their next match, a three-day clash against Devon at Sandford CC, starting on Sunday, July 30.

Pictured: Shropshire picked up six points from a drawn match at St Austell.

Former England wicketkeeper Chris Read at the crease at start of day two of...
Scroll to top