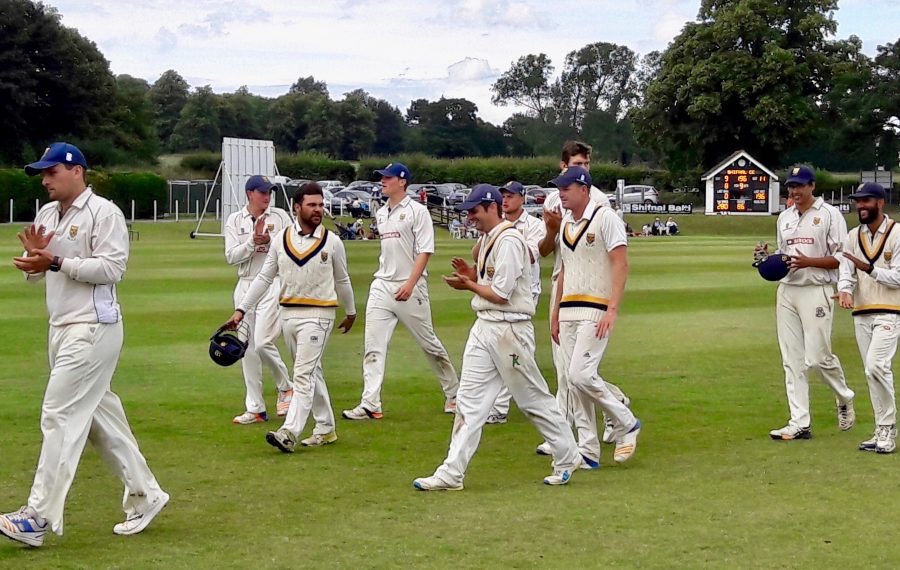 Impressed Karl Krikken hailed the level of Shropshire’s performance after beating Oxfordshire by eight wickets to register an opening Unicorns Championship victory of the season.

After beginning the campaign with draws against Wales and Herefordshire, Shropshire delivered the win they wanted to kickstart their Western Division campaign following three productive days at Shifnal.

Having dismissed Oxfordshire in their second innings for 196, with spinner David Wainwright taking four wickets, it left Shropshire requiring just 94 to seal victory, and skipper Steve Leach led from the front with an unbeaten 48 as the hosts eased to their target inside 22 overs.

Director of cricket Krikken will now be seeking more of the same when Shropshire head to St Austell to face Cornwall on July 16.

The win over Oxfordshire lifted Shropshire, 14 points behind leaders Berkshire, up to second place in the table.

Krikken said: “It’s nice to get off the mark and we played somewhere like we can play.

“It keeps us in touch. Berkshire have won so it keeps us one win behind them. All you can do is keep going and this puts us somewhere up there.”

Shropshire started the third and final day 36 runs in front and chasing quick wickets after reducing Oxfordshire to 67-3 overnight.

Jack McIver made the day’s first breakthrough, removing Olly Clarke, caught by Will Parton, for 21 with the score on 89.

Alex Wyatt, who ended with 3-44 from 30 overs, then trapped skipper Jonny Cater lbw for 17 before Oxfordshire slumped to 136-6 when Harry Smith, who top scored in their first innings, departed for a patient 39, Parton holding on to another sharp catch as off-spinner McIver struck again.

Shropshire were frustrated in their quest for wickets for 90 minutes after lunch until young Shrewsbury paceman Dillon Pennington chose the perfect time to take his first Championship wicket, bowling Harvey Eltham for ten.

James Fitzjohn had faced 184 balls for 39 before his stubborn resistance was finally undone by a fine delivery from Wainwright.

That left Oxfordshire on 190-8 and before they knew it, it was all over, the visitors dismissed for 196 as Wainwright struck twice more with successive balls getting rid of Robert Keat and last man Bradley Taylor to give the former Derbyshire left-arm spinner figures of 4-42 from 40.2 overs.

Shropshire quickly lost in-form opener Omar Ali, stumped by wicketkeeper Cater off Eltham for 13, when they began their reply after tea, but Leach was then joined in the middle by Will Parton and the pair put on 64 before Parton became Eltham’s ninth victim of the match for 24.

But the finish line was firmly in sight and Leach, joined in the middle for the closing stages by Charlie Home, saw the job through.

“McIver bowled nicely and I’m pleased for Wainers. He’s bowled consistently well without getting the rewards and he finally ended up with 4-42 from 40 overs which is a great efffort.”

Oxfordshire had elected to bat on day one and, led by 67 from Championship debutant Smith, totalled 280-7 from their 90 overs. The Shropshire bowlers stuck to their task well in the Shifnal sunshine, with paceman Wyatt claiming 3-60 from 25 overs.

Shropshire then established a first innings lead of 103 runs as a strong batting display saw them rattle up 383-9. Openers Ali and Leach once again laid solid foundations by putting on 149 for the first wicket before Leach was trapped lbw by Eltham for 50.

Ali looked set to follow up the century he hit in the last match against Herefordshire by reaching three figures once more until he went for 90, from 124 balls, which included a six and 13 fours.

Shropshire were also well served by a fifth-wicket stand of 95 between Joe Carrasco (59) and Ross Aucott, who struck a run-a-ball 90, with a six and seven boundaries, before being caught on the boundary off the bowling of off-spinner Eltham, rewarded with a haul of 7-151 from 43 overs.

“Omar again played magnificently,” said Krikken. “It’s the best I’ve seen him play for Shropshire, his knocks in the last two games, and the captain’s done really well again. Aucott and Carrasco just proved the talent keeps coming from Shropshire along with Will Parton.”

Picture: Captain Steve Leach leads the Shropshire team off the field after Oxfordshire were bowled out for 196 in their second innings at Shifnal.