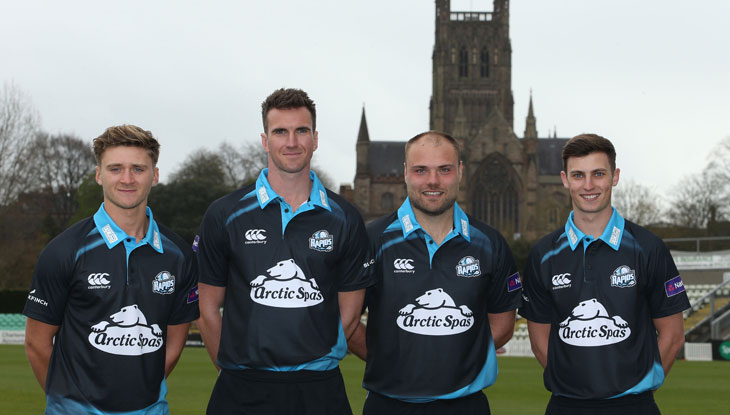 Shropshire captain Steve Leach insists he’s excited about facing Worcestershire’s collection of county old boys when the New Road professionals head to Shifnal for a showpiece Twenty20 clash next week.
The match on Friday, May 13 (5pm) offers opening batsman Leach the chance to go head to head with his brother Joe, Worcestershire’s vice-captain and opening bowler, and three more Shropshire old boys in Ed Barnard, Joe Clarke and Jack Shantry.
The fixure, also successfully held at Bridgnorth, Shrewsbury and Wellington in the past, has become a popular date in the calendar for both clubs.
Leach, 22, said Shropshire always relish the chance to test themselves against first-class opposition while the game helps Worcestershire Rapids prepare for their NatWest T20 Blast campaign, which begins the following Friday against Durham.
Leach said: “It’s always a really good night and credit has to go to chairman Toby Shaw and the committee for arranging the game again.
“It’s a great opportunity for our players to showcase their skills, particularly those who want to go further in the game.
“It’s nice for Shropshire cricket to have Worcestershire visiting and there will be a lot of excitement about it. There’s already a bit of a buzz around Shifnal and I’m really looking forward to it.”
Leach has already faced Worcestershire this season having lined up against the Pears for Oxford MCCU at The Parks early last month. The first-class county emerged convincing winners in the three-day game, with Leach’s wicket in the second innings claimed by his brother.
“He had me caught at first slip, but we’re just two cricketers on the pitch at the end of the day,” he said. “I saw Joe getting Alastair Cook, the England Test captain, out on TV this week, so I don’t feel so bad about him getting me out earlier in the season now!
“I suppose it does add a little bit of extra spice playing against him and I know a lot of the other guys there as well. There’s a massive Shropshire contingent within the current Worcestershire team.
“This time they’ve said they’re not going to give us any of their players to play in our team, so that’s probably an indication of how important the Shropshire guys are to Worcestershire, but we’re all really looking forward to it.”
Leach, a member of Worcestershire’s Academy from the age of 14 who also signed summer contracts for the club, believes next Friday’s match wil be an exciting one.
He added: “We scored at eight and a half runs an over for 33 overs in our last match at Wales Minor Counties in the Unicorns Trophy.
“I know we’re going to come up against different opponents here, but I think we’ve got some really exciting players and Shropshire have come very close to beating Worcestershire a couple of times in the past.
“Richie Oliver has just come out of the Worcestershire team having been one of their opening batsman, so we’ve got a lot to showcase ourselves. It’s just a matter of being fearless and trying to put on a good show.”
Shropshire chairman Toby Shaw said he was delighted to have again secured the fixture with Worcestershire and he hopes a big crowd will enjoy next Friday’s game. Admission prices at Shifnal will be £5 for adults and £2 for under-16s.
“We’ve got a good relationship with Worcestershire and playing them is always an enjoyable occasion,” he added. “We’re also going to be supporting Worcestershire captain Daryl Mitchell’s benefit season, so we’re very much looking forward to the game.”
Stuart Dunn
Pictured: The Shropshire old boys now key men for Worcestershire, from left: Joe Clarke, Jack Shantry, Joe Leach and Ed Barnard. Picture by Tony Marsh.
http://www.shropshireccc.co.uk/wp-content/uploads/2016/05/CPX_Worcestershire_Media_Da.jpg 415 730 Brian Foxall http://www.shropshireccc.co.uk/wp-content/uploads/2013/12/SCC-Website-Logo-340x156-WhiteText.png Brian Foxall2016-05-05 11:45:172016-05-05 11:45:17Shropshire old boys returning with Worcestershire for T20 clash
Shropshire bounce back to win in Wales