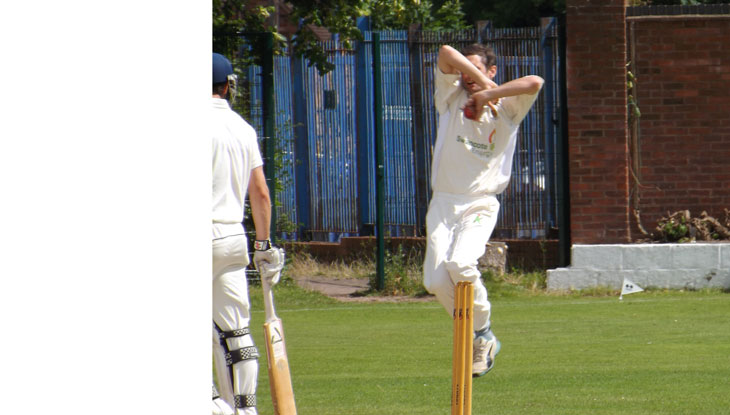 Shropshire’s cricketers stormed to the top of the Unicorns Championship’s Western Division as David Wainwright held his nerve to lead the county to a four-wicket win over Cornwall, the side they replace in pole position.
Wainwright, the former Derbyshire star, cracked an unbeaten 80, and shared in an excellent partnership of 150 for the fifth wicket with Worfield’s Ross Aucott, who struck a fine 89, as Shropshire recovered from a precarious 64-4 to make it three wins out of three in the Championship.
Set 245 for victory on the final day of the three-day clash at Bridgnorth, Shropshire were delighted to get past the winning post to register another impressive win. Their next game is against Berkshire at Shifnal, beginning on July 17.
Wainwright, who also took seven wickets against Cornwall and weighed in with 46 in the first innings, said: “It’s an ideal start. Coming into the last day, chasing 240, we knew it was probably going to be a pivotal point of the season. If we hadn’t got over the line they would have been three from three and it would have been hard to catch them.
“We knew that was the plan to get to three from three and I’m just glad that we could get over the line.”
Cornwall, who had arrived at Bridgnorth’s Cricket Meadow five points clear at the top of the Western Division table, opted to bat first on winning the toss on Sunday morning.
They were soon in trouble at 84-6 before Greg Smith, the ex-Essex and Derbyshire allrounder, led a revival by hitting 92 until he was stumped by wicketkeeper Luke Tinsley off the spin of Wainwright, who claimed 4-72. Paceman Alex Wyatt (3-63) was also among the wickets again as Cornwall were dismissed for 245.
Shropshire established a slender first innings advantage of eight runs after being bowled out for 253. Aucott, at No 6, was left stranded, unbeaten on 76, from 117 balls, while there were also useful contributions from skipper Steve Leach (46), Wainwright (46) and Joe Carrasco (35), with Andrew Libby taking 5-93 for the visitors.
Cornwall lost a flurry of key wickets either side of lunch on day two. Potential dangerman Brad Wadlan, once of Glamorgan, fell to Henry Blofield for 10, just reward for the Shrewsbury spinner who picked up 2-77 after being asked to bowl 33 overs.
Then Smith, the star of Cornwall’s first innings, was trapped lbw by Wainwright for four, another telling blow delivered by the spinner en route to snaring 3-77 from another marathon 39 over stint.
Matt Rowe, at No 7, carved out a patient 67, but Sam Griffiths and Wyatt, who each took two wickets, wrapped up the Cornwall innings for 252, to leave Shropshire chasing 245 for victory on the final day.
That target looked a long way off when Shropshire were in trouble at 64-4 after losing three wickets in four balls. Cool heads were called for and Wainwright together with Aucott duly obliged to steer Shropshire towards the finishing line.
Aucott, who went on the attack after lunch, eventually perished for 89 to complete a fine match with the bat, but when he was out, bowled by Jordan Thomas, Shropshire still required 31 to win.
In Wainwright, though, they had the ideal man for the situation at the crease and he got his head down to see the job through, sealing victory with a boundary.
Shropshire earlier made a positive start to their chase with openers Richard Oliver and Leach putting on 57 inside 15 overs before Oliver was stumped off Smith for 35.
The 18th over saw three wickets fall in four balls with the score on 64, with Carrasco bowled by Libby, Omar Ali caught at mid-off first ball and Leach swiftly followed, caught behind for 28.
But then Wainwright was joined in the middle by Aucott and they steadied the ship, both passing 50 just after lunch and batting together for 36 overs, until Aucott was bowled by Thomas, 11 runs short of a century, having faced 109 balls and hit a six and 13 boundaries on his way to 89.
Wainwright then saw it through to seal victory with his ninth four to end 80 not out from 138 deliveries.
Karl Krikken, Shropshire’s director of cricket, added: “At one stage at 70-4 you’re staring down the barrel, but Aucott was magnificent again, following up his 76 in the first innings, and Wainwright has been immense for us all year really and saw us home with his 80 not out.
“He’s an experienced cricketer and should be playing higher really, but fortunately for us he’s with us and he just held it together, so I’m really pleased.”
Stuart Dunn
Pictured: David Wainwright in action against Cornwall at Bridgnorth.
http://www.shropshireccc.co.uk/wp-content/uploads/2016/07/David-Wainwright-v-Cornwall.jpg 415 730 Brian Foxall http://www.shropshireccc.co.uk/wp-content/uploads/2013/12/SCC-Website-Logo-340x156-WhiteText.png Brian Foxall2016-07-05 19:42:422016-07-05 19:42:42Shropshire replace Cornwall as leaders following fine victory
Shropshire CCC profile: Ryan Lockley