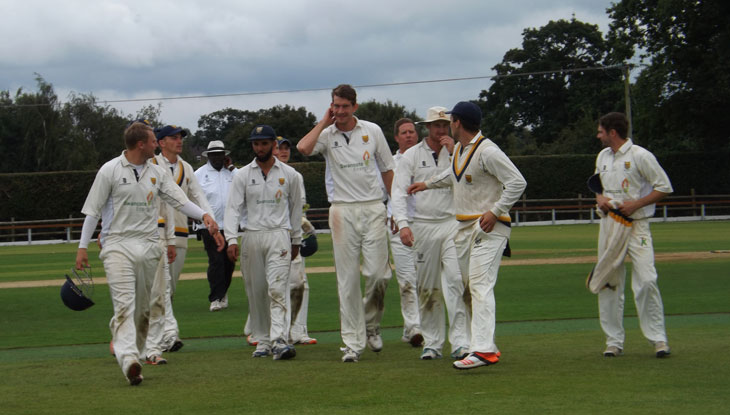 Shropshire returned to the top of the Unicorns Championship Western Division table after wrapping up a 70 run victory on the third and final day against Cheshire at Nantwich.
Well aware the key clash between fellow title contenders Cornwall and Berkshire had been abandoned as a draw with no play possible in the south west after the opening day, Shropshire took full advantage to leapfrog both sides by dismissing Cheshire for 230 just after tea.
Shropshire will now head into their final Western Division game against Wiltshire at Devizes, which starts on August 14, five points clear of Berkshire in pole position.
Chairman of selectors Brian Foxall, pleased that Shropshire’s title destiny is in their own hands, said: “We just have to approach it in the same professional manner that we’ve approached all the other games. It’s just been terrific application. The captain, Steve Leach, has captained well. It’s been absolutely terrific.”
The county’s latest victory, Shropshire’s fourth in five Championship matches this season, made it a fitting way for the long-serving James Ralph to celebrate his 100th Minor Counties Championship appearance for the club.
Spinners Henry Blofield and David Wainwright shared nine of Cheshire’s 10 second innings wickets between them – Wainwright ended with match figures of 10-154 from 49.1 overs – but Foxall was keen to hail the quality of the all round team display.
He said: “It was terrific bowling from the two slow bowlers, but it’s been a great all round team performance.”
Shropshire started the final day at Nantwich on 132-4, a lead of 228 as they went in search of quick runs. Skipper Leach and Wainwright completed a fifth-wicket partnership of 100 before Leach fell for 63.
Wainwright, having made it two half centuries in the match, continued to find runs in plentiful supply and was unbeaten on 79, from 72 balls, when the declaration came with Shropshire on 204-6. Former England Lions man Wainwright struck a six and 13 fours to lift his tally of Championship runs this year up to 420 runs.
Set 301 for victory, Cheshire soon lost opener Calum Rowe, caught behind by debutant wicketkeeper Harry Chandler off Alex Wyatt with the score on six in just the third over.
But Rick Moore and Ryan Brown then went on the attack, sharing a partnership of 121, which was finally ended after lunch when Wainwright trapped the dangerous Moore, attempting a reverse sweep, lbw for 66, a defining moment.
From 127-1, Cheshire were soon wobbling at 132-4. Two more wickets then fell in quick succession as Blofield removed Henry Dobson before the Shrewsbury spinner struck again in the same over, with Richard Oliver’s safe hands accounting for Cheshire skipper Lee Dixon for a quickfire 21.
Cheshire were really up against it when Wainwright bowled Adam Worrall to reduce the hosts to 175-7 and they were dealt another blow when former Glamorgan man Will Owen, caught by Ross Aucott, became Blofield’s fourth victim for 25.
Keen to seal victory as quickly as possible, Wainwright got rid of Ash Davies lbw before, fittingly, having the final word by bowling Danny Woods to leave Jack Williams stranded on 32 not out.
Wainwright ended with 5-91 and Blofield claimed 4-60 as Shropshire produced another impressive display.
Having opted to bat first on the opening day, Shropshire totalled 330, their highest score of the season, in the first innings. That owed much to the contribution of former Derbyshire team mates Scott Elstone and Wainwright, who both played fine knocks.
New recruit Elstone, at No 3, making his debut after illness ruled out Joe Carrasco, registered Shropshire’s first century of the season with 114, from 141 balls, which featured 23 boundaries.
Wainwright almost joined him in reaching three figures before falling for 95, after sharing in useful partnerships with Omar Ali (26) and Chandler (23). Woods (5-80) was the pick of the eight home bowlers used.
Cheshire ended day one on 43-1 and then lost wickets regularly on the second morning before eventually being bowled out for 234 just after lunch as Shropshire forged a first innings lead of 96 runs.
Moore struck a determined 66 before falling to consistent spinner Wainwright, who took 5-63 from 23 overs. Blofield, fresh from taking eight wickets for Shrewsbury in the Birmingham League last weekend, snared two victims before paceman Wyatt helped mop up the tail by claiming 3-42.
Shropshire were going along well at 132-4 in their second innings before rain brought a premature end to the day’s play, which meant the county started the third and final day in a strong position, and they were just in the mood to drive home their advantage with another excellent match winning performance.
Stuart Dunn
Pictured: A jubilant Shropshire team leaving the field at Nantwich after wrapping up victory over Cheshire