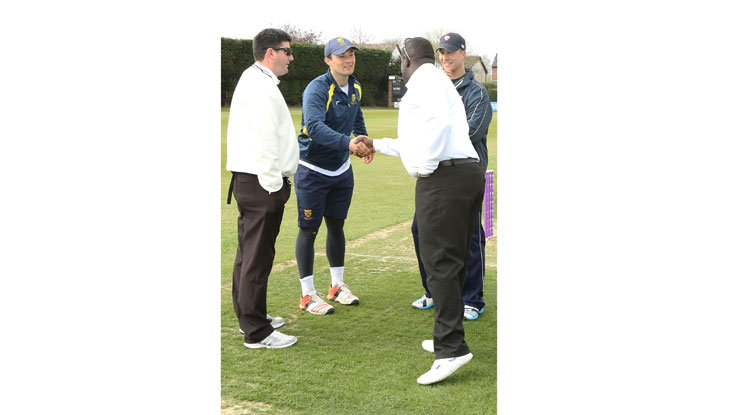 Captain Steve Leach has urged Shropshire’s cricketers to build on the impressive victory secured in their last game when they resume their quest to qualify for the knockout stages of the Unicorns Trophy this weekend.
Leach was pleased to enjoy his first win as county captain at the expense of Wales Minor Counties in Abergavenny – now he wants Shropshire to hit the heights again when they face Cheshire in their third group game of four at Oswestry on Sunday.
Leach said the performance against Wales, which kept alive Shropshire’s qualification hopes, was just what he was looking for after the county opened their season with a home defeat against Herefordshire.
“We are up and running and in pretty emphatic style as well,” he said. “It was an absolutely great win. We asked for a reaction from the Herefordshire game where we know we were under par, especially with the bat.
“It was pretty brutal at times against Wales and it was a really good all round team performance, exactly what we wanted. We want to put the opposition under a lot of pressure, we did that, and thankfully they succumbed.”
Leach stressed the importance of Shropshire maintaining the winning feeling against Cheshire, conceding there’s little room for error if the county are to stay on course to qualify.
He added: “As soon as you lose a one-day game, all the others become must-win games. The Cheshire game is important, but if we win our remaining games then we qualify. Let’s not leave it in anyone else’s hands.”
Shropshire lost a high-scoring game against Northumberland by six runs on their last appearance at Oswestry last May, with Leach revealing Morda Road is a ground the county always enjoy visiting.
“It’s a really nice ground and the Shropshire guys really enjoy going there,” he said. “It’s usually a decent batting pitch, so hopefully it will be a high-scoring game and be nice and exciting for everyone.”
Sunday’s match against Cheshire at Oswestry starts at 11am and admission is free.
Shropshire are also in action on Friday night when they host first-class neighbours in an attractive Twenty20 clash at Shifnal Cricket Club (5pm).
Stuart Dunn
Pictured: Steve Leach, the Shropshire captain, meets the umpires ahead of his first game as skipper last month. Now he’s looking for the county to make it back-to-back wins this weekend. Picture: Tony Marsh.
http://www.shropshireccc.co.uk/wp-content/uploads/2016/05/CPX_Shropshire_Herefordshir.jpg 415 730 Brian Foxall http://www.shropshireccc.co.uk/wp-content/uploads/2013/12/SCC-Website-Logo-340x156-WhiteText.png Brian Foxall2016-05-10 09:24:362016-05-10 09:24:36Shropshire v Cheshire Preview
Twelve to face Rapids