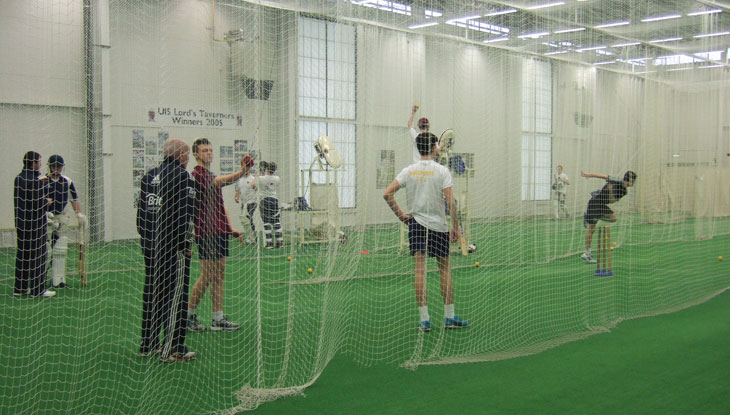 Shropshire’s cricketers are again receiving a helping hand from two vastly experienced former England players as they step up their preparations for the 2016 season.
The county squad, under new captain Steve Leach, has been meeting regularly for pre-season net sessions at Shrewsbury School’s Neville Cardus Indoor Cricket Centre since the turn of the year.
Director of Cricket Karl Krikken has been pleased with the numbers attending each session and stressed there’s plenty to look forward to as Shropshire work towards their opening Unicorns Trophy match of the season against Herefordshire at Shrewsbury’s London Road ground on Sunday, April 24.
Krikken, the former Derbyshire coach, has again enlisted the services of two men he knows well, with former England duo Jack Birkenshaw and Mike Hendrick both visiting Shrewsbury to work closely with the Shropshire squad.
Hendrick, the former Derbyshire and Nottinghamshire seamer, played 30 Test matches for England between 1974-81 while Birkenshaw appeared in five Tests from 1972-74 and played for Yorkshire, Leicestershire and Worcestershire before coaching Leicestershire to two County Championship triumphs and also enjoying a successful career as an umpire.
Krikken said: “We’ve been holding net sessions every couple of weeks and it’s nice that Hendo and Burky have agreed to come down again after also working with the players last year. Their experience is tremendous, they’ve got that in abundance, and they love the sessions.
“They really get involved and that’s what you want. It’s great for the players to work with people who have such knowledge of the game.”
Krikken insisted he was encouraged by many of Shropshire’s performances in the Unicorns Championship last summer and has high hopes they can continue to progress this season while he revealed he’s seeking an improvement in the one-day game after the county went out at the group stages of the Unicorns Trophy last year.
“I can’t wait really for the games to begin,” he said. “I thought we were a bit unlucky in the Championship and just ran out of time in a couple of games, but we played some very good cricket in a lot of the matches.
“The players are looking good in the nets and, while we’ve already got a young squad, it’s been nice to be able to invite a few more even younger players along and have a look at them, so it’s all looking good.”
Krikken added Shropshire new boy David Wainwright, the former Derbyshire, Yorkshire and England Lions left-arm spinner, had quickly fitted in well with his new team mates at the pre-season sessions.
Stuart Dunn
Pictured: Shropshire’s cricketers preparing for the new season in the nets at Shrewsbury School’s Neville Cardus Indoor Cricket Centre.
http://www.shropshireccc.co.uk/wp-content/uploads/2016/02/Nets-2016-003.jpg 415 730 Brian Foxall http://www.shropshireccc.co.uk/wp-content/uploads/2013/12/SCC-Website-Logo-340x156-WhiteText.png Brian Foxall2016-02-29 10:04:502016-02-29 10:04:50Shropshire’s cricketers prepare for new season with former England duo
Two year contract for Sanderson

Development XI gets under way
Scroll to top