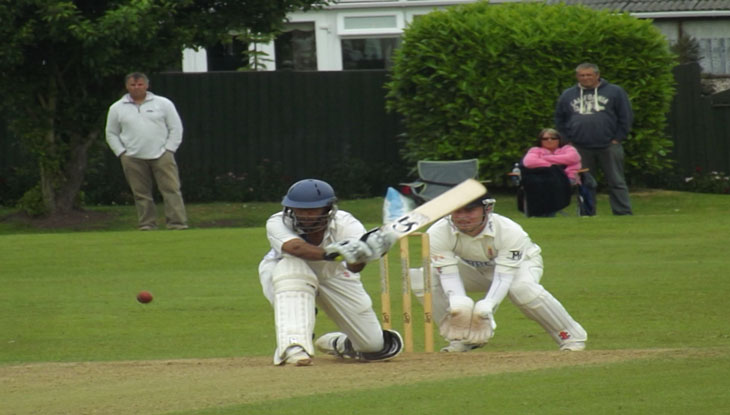 Shropshire’s Unicorns Trophy campaign ended on a low note as they were well beaten by eight wickets at Group Two winners Staffordshire, a third reverse in four one-day games this season.
Shropshire were dismissed for just 78 before Staffordshire, who have won all four of their group games to book a home tie in the quarter finals, cruised to 79-2 – with the action at Leek all over by just after 2pm on a day to forget for the county.
Karl Krikken, Shropshire’s director of cricket, said: “We spoke before the game about having basically individual pride in your performance really, make sure that you do the job, don’t leave it to anybody else and unfortunately it just didn’t happen.
“We were 20-3 in no time and, apart from 40 odd from Omar Ali, we were always struggling. Everything that was going to go wrong went wrong really.”
Skipper Steve Leach elected to bat first on winning the toss but Shropshire – who will be seeking to perform much better when they launch their three-day Championship season against Dorset at Whitchurch on June 5 – were soon in trouble at 13-2 with both the captain and fellow opener Richard Oliver quickly back in the pavilion.
Shropshire, who needed an emphatic win to have any chance of qualifying for the knockout stages, continued to struggle and debutant Jack McIver and Ross Aucott both failed to trouble the scorers as the visitors found themselves a precarious 32-4 in just the seventh over.
Former Yorkshire and Derbyshire man David Wainwright soon followed, run out for five, and, despite Omar Ali hitting 46 from 38 deliveries, an aggressive knock featuring nine boundaries which comfortably made him top scorer, when he was caught at long off, Shropshire were reeling at 68-6.
Ryan Lockley and Henry Blofield fell off successive Matthew Parkinson balls in the 15th over and Sam Griffiths was only able to contribute a single before he was ninth man out, joining team mates Leach, McIver and Aucott in being caught behind by wicketkeeper Danny Brierley.
Will Cook was then Parkinson’s fourth victim, the Urmston leg-spinner taking 4-13, to leave Shropshire all out for just 78 inside 25 overs.
Staffordshire, in reply, found runs rather easier to come by as openers Kadeer Ali and Sam Kelsall put on 61, a partnership ended in the 17th over when skipper Ali, brother of Shropshire’s Omar, became Shifnal man McIver’s first victim for the county for 22.
Tim Maxfield was then bowled by McIver (2-14) but Kelsall saw the job through with an unbeaten 41 to steer Staffordshire to 79-2 from the final ball of the 22nd over.
Shropshire’s director of cricket Karl Krikken insists there is a determination within the county’s ranks to make amends in the Unicorns Championship after bowing out of the Unicorns Trophy one-day competition .
Shropshire, who needed to gain an emphatic win in their final group game with Staffordshire at Leek to have any chance of progressing to the knockout stages, were well beaten by eight wickets after being bowled out for just 78.
Krikken said the players are now looking forward to returning to action and showing what they are really capable of when they begin their three-day campaign in the Championship against Dorset at Whitchurch on June 5.
“It wasn’t a 78 all out wicket at all,” said Krikken. “We had a good chat after, a long, long chat. We have done historically better over the last couple of years in the three-dayers, but we have to show some application to be better.
“We’ve got a couple of weeks to work at it. Lads have got to go back to their clubs and score big runs and take decent wickets, and then we’ll pick a decent side for the game at Whitchurch.”
Krikken, who held a meeting with the players after the game against Staffordshire, added: “They’re chomping at the bit to go out and have another go. There were some honest words spoken and the lads said their bit. We’ve got to move on and get better.”
Stuart Dunn
Picture : Omar Ali
http://www.shropshireccc.co.uk/wp-content/uploads/2015/06/Omar-sweep-v-Wales.jpg 415 730 Brian Foxall http://www.shropshireccc.co.uk/wp-content/uploads/2013/12/SCC-Website-Logo-340x156-WhiteText.png Brian Foxall2016-05-22 18:36:432016-05-22 18:36:43Shropshire’s Trophy campaign ends with defeat at Staffordshire
In profile: David Wainwright