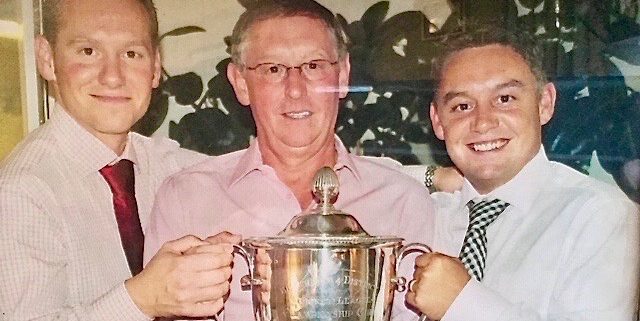 Adam Byram was a regular member of the Shropshire team for 13 years from 1989 to 2002, combining representing his home county with playing club cricket for Wellington, his local club.

A left-arm spinner, Adam played 97 Championship matches for the county, taking 227 wickets at 30.47 apiece, with his best figures 7-20 against Dorset at Wellington.

Capable of chipping in with valuable runs down the order, Adam struck 1,414 runs Championship runs for Shropshire at an average of 17.90, compiling three half centuries, with a top score of 82 against Wiltshire at Westbury.

Adam also appeared in 46 one-day matches for Shropshire, claiming 45 wickets, with his best return 4-24 in a NatWest Trophy victory over Ireland in Dublin in 2000.

He later had a spell playing Minor Counties cricket for Staffordshire.

He played alongside his younger brother Gavin, an all-rounder, for Wellington and Shropshire for many years.

When and where did you start playing cricket? Wellington Cricket Club. I think my first steps were on the outfield when I first started to walk. With my parents being heavily involved, the club played a massive part in my life when I was growing up.

What’s your earliest cricketing memory? I can remember coming on as a sub fielder for the first team when I was aged about 10. They had 10 men as someone had got injured, so I fielded at fine leg both ends for Joe Smith. I can also remember Wellington’s first team winning their first-ever trophy by beating Whitchurch when I would have been about 12.

Biggest influence on your career? Without doubt, it was my father Peter and brother Gavin. Even when I was in my late 20s and I was playing in a Wellington or Shropshire game and it was a tight situation, I would look around when I was bowling and my father would discreetly tell me if I was bowling it too quick or too slow through mid air or whatever it might have been. He was always good to offer some technical and tactical advice.

Joe Smith and Terry O’Connor were also huge influences at Wellington while Steve Gale also helped me when he was captain of the Shropshire League side that I played in.

Most memorable match you played in? The most memorable was the day Wellington got promoted from Birmingham League division one to the premier division. We were third at the start of the final day with the top two getting promoted. We were away to Kenilworth, who were second, and we got 250 before bowling them out about 40 runs short. That was a very memorable day, as much as anything that it was a team full of lads that had grown up together. We had a great team spirit and the majority had come through the youth ranks at Wellington. We were all of a similar mindset and had played together for years. It was one of the best sides I played in and at that stage we hadn’t paid a professional in the club’s history. It was just local lads playing for each other.

There were also some memorable matches for Shropshire. Taking 7-20 against Dorset, my best Minor Counties figures, on my home ground, and there were two Lord’s appearances in MCCA Trophy finals against Devon and Norfolk. Another great memory is beating an Ireland side, which included Ed Joyce, in the NatWest Trophy in Dublin in 2000 when I managed to pick up four wickets and the man of the match award.

Highlights of your playing days? I think it was just the camaraderie, the places it’s taken you and the people you have met as much as anything. You don’t often remember a session when you were fielding in the sun or in the cold for two hours. It’s more about the places you have played and who you have played with and against. The relationships just extend from there.

I was lucky enough to go and play abroad as an overseas player in New Zealand in 1992. I had a season playing for Howick in the Auckland Premier League. I opened the batting with Blair Pocock, who at the time was opening the batting for the New Zealand Test side, so I was definitely the junior partner!

Best player you played alongside? I’ve been fortunate to play with some great players, but it’s probably Chris Rogers, who was part of the Wellington team that won the Birmingham League for the first time in 2003. He had re-signed to have a second season at Wellington, but Derbyshire then came in and offered him the overseas player position and obviously we were not going to stand in his way. He’s come back to the club quite a few times and still keeps in touch. He’s a great lad and went on to have a fantastic career, playing Test cricket for Australia.

Phil Simmons, the former West Indies player and a fantastic guy, also came to play at Wellington later on. He’s probably one of the nicest guys you could ever play cricket with. I remember after his last game on the last day of the season, we beat Barnt Green at home and he actually went round every single person in the clubhouse, shaked their hand and thanking them for having him.

John Abrahams always stands out from the early part of my career when he played for Shropshire as a 100 per cent top level pro. He contributed with bat, ball and his fielding. John Foster was captain of the side at the time and if he was looking for a sweeper for the extra cover boundary, rather do what some of the old pros would by still standing at slip, he would instead put his hand up and go out there, diving full length and things like that. There was one memorable two-day match I played with him for Shropshire at Newport. I think on the second day he took eight wickets, including a hat-trick, and then he scored 130 not out as we knocked them off. He was also brilliant to go to for advice.

My first NatWest Trophy game for Shropshire was away to Derbyshire when Devon Malcolm was playing for them. I came in to bat with Mark Davies. He told me just don’t do anything stupid and make sure you look like you’re playing it. The first ball was short outside my off stump. I swished at it and luckily it went one bounce over the covers into the crowd. The next ball was a few yards quicker!

Favourite ground where you have played? I can’t say anything other than Wellington, my home ground. You would struggle to beat that on a sunny day. Lord’s was obviously a special place to play. We played Minor Counties matches at some beautiful grounds all the way through. I also enjoyed playing at Arundel Castle for the Minor Counties representative side against the Duchess of Norfolk XI, which was a combination of first-class players, including Adam and Ben Hollioake.

Team mate which made you laugh the most? There’s been some great characters like Graham Walker at Wellington. Jason Weaver was one of the funniest guys I played with in the Shropshire side, Derek Ashley as well. There’s so many different characters in different teams.

What did you enjoy most about playing for Shropshire? I’m a Shropshire lad, I was born here, and I was always proud to represent my county. There was a lot of interest in Minor Counties cricket, some very good players. I could understand the move to three-day cricket to encourage better cricket, but I don’t think in the long run that it probably increased the standard because sides could sometimes only get seven or eight of their first XI out because of work and family commitments. I always enjoyed playing alongside my team mates for Shropshire.

Pictured: Adam Byram, right, with brother Gavin, a team mate for Wellington and Shropshire for many years, and father Peter.