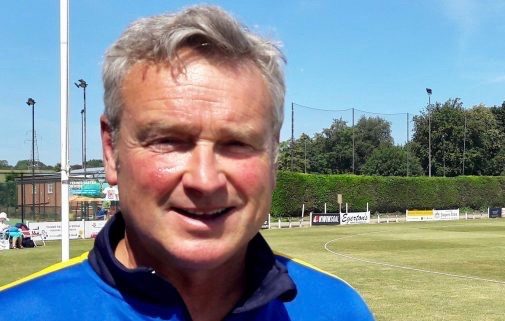 Bryan Jones made his Shropshire debut in 1981 and went on to play 123 Minor Counties Championship matches for the county.

A consistent opening batsman, Bryan scored 6,187 Championship runs at an average of 33.88, with a highest score of 168 not out. Only Steve Johnson and Mark Davies have scored more runs for the county. An occasional bowler, he took seven wickets and held onto 73 catches.

Bryan, who also enjoyed captaining the county, was a regular in the Shropshire one-day side for many years, hitting 1,689 runs at an average of 31.28.

Bryan has more recently been Shropshire’s team manager and chairman of selectors.

He had a spell with Worcestershire at the start of his career and toured the West Indies in 1980 as part of the England Young Cricketers squad.

Bryan played his club cricket for Wroxeter for many years and later also represented Shrewsbury, Shifnal and Wem.

When and where did you start playing cricket? I started playing cricket at home at the family farm in Nesscliffe with my two older brothers Barry and Peter. I started to go with them to Knockin & Kinnerley Cricket Club when I was aged eight or nine. There was a lot of good youth cricket played between Oswestry, Frankton, Whittington and Knockin, well organised children’s cricket. I would play continuously with my friends and my brothers in the yard at the farm where I was brought up.

What’s your earliest cricketing memory? I remember playing as a youngster in adult cricket and dealing with the ball travelling harder and faster towards you, getting used to that. It was a learning curve, where it all started and when I was 10, 11, 12 I would play in the second XI at Wroxeter.

Playing cricket at Kingsland Grange School was also a big influence. Dick and Alan Groves ran the school and they were brilliant. That’s where my love of cricket and sport in general really came from. We played well organised school cricket and that led to me being selected to play representative cricket for Shropshire from the youngest age possible. I then played for all of the other county age group teams.

Biggest influence on your career? My two brothers because they played a lot of cricket with me. Barry went on to play professionally at Worcestershire for four or five years while we also played club cricket together at one stage which was nice – I always wanted to play a cover drive like Barry.

I followed Barry down to Worcester and lived with him there when I was on a summer contract with Worcestershire. From being at Worcester and playing for Shropshire, it led to me getting an England call up and I went to the West Indies for a six-week tour with what is the equivalent of the England under-19s now in 1980. Charlie Elliott and Graham Saville were the managers and I was part of a squad of about 15 from various counties with the likes of Neil Mallender, Neil Foster, Tim Boon, Raj Maru and Steve O’Shaughnessy, who all went on to have very good careers.

Most memorable match you played in? Making my Test match debut for England under-19s against the West Indies in St Lucia has to be one of them. I then broke my thumb in Barbabos which meant I wasn’t available for selection. We drew the Test that I played in. I got 36 in the first innings and was not out in the second innings against a West Indies team that included players like Gus Logie and Roger Harper. I remember Roger Harper got me out first ball when we played against Jamaica at Sabina Park. I’ve still got my England sweater with the golden lion on the front.

There’s been so many memorable games over the years. Part of the reason you play is to play in a team that does well, so you remember sides where you’ve had good runs over the years. When I was captain of Shropshire, we won a lot of matches in 2000. We came second in 2001 and were rained off when we had a chance of winning the western division title.

Leading the team out at Lord’s for the Trophy final against Devon in my first year as captain in 1998 was special. We were a highly competitive team around that era. I wasn’t necessarily the best captain in the world, but the role brought a lot out of me individually and that helped the team as well. We had a good team and some good pros like Asif Din and Kevin Evans.

I remember the 1998 Trophy semi-final when we beat Oxfordshire when Mark Davies and William ’Spot’ Davies got us over the line in a tight finish. There was also a memorable county game against Berkshire at Bridgnorth the same season when Matt Turner was at his peak. We were chasing down 325 in 60 overs. Matt came in and started to smash the ball to the supermarket. He completely changed the game. It brought my momentum on and Matt and I knocked the runs off. I think I ended up about 150 not out.

I also have good memories of a Championship match away to Oxfordshire in 1999 when myself and Mark Davies both scored hundreds as we put on an unbroken first-wicket partnership of 303, which is a Shropshire record.

Highlights of your playing days? Getting involved with the England set up at a young age, playing through all the age groups for Shropshire and ending up captaining the team. Being part of the Shropshire team which beat Yorkshire in the NatWest Trophy at St Georges in 1984 was another highlight. I also enjoyed representing the MCC on a tour to Papua New Guinea and Fiji.

Playing in winning teams was always a highlight. At club level, we had a good winning run at Wroxeter. Then we did well at Shifnal where I enjoyed working alongside Chris Cadman. We won a few divisions to get into the Birmingham League’s premier division and then finished in the top four.

Best player you played alongside? We have had so many good Shropshire lads playing for the county over the years. In my time, I enjoyed playing alongside people like John Foster, Rob Burton, Tony Parton, James Ralph, Mark Davies, Matt Turner, Gavin Byram, Adam Byram, Derek Ashley, Andy Barnard, Adam Shimmons, Steve Gale and Brian Perry. I played with and against those guys locally for many years and they were all very good players.

We also had some great pros for Shropshire, the likes of Mushtaq Mohammad, DS de Silva, Paul Pridgeon – who was also a team mate at Wroxeter when we had a particularly strong side – Asif Din, Kevin Sharp and John Abrahams.

Best player you played against? I played 20 List A games for Shropshire and came up against so many good players. Viv Richards played against us at Wellington for Somerset in 1983. I think he was the best player ever, so I was fortunate to play against him. Ian Botham and Joel Garner also both played in that match. I caught Ian Botham off Brian Perry, who was man of the match in that game.

I was lucky enough to play in a lot of those games against other top players like David Gower, Marcus Trescothick, Chris and Robin Smith for Hampshire. I also have so many memories of facing excellent bowlers like Andy Caddick for Somerset and Devon Malcolm against Derbyshire at Chesterfield. I think the fastest bowler I faced was a chap called Andre van Troost, a Dutchman who played for Somerset. He was lightning quick.

Favourite ground where you have played? Lord’s would be my favourite. I played for years and years at Wroxeter under The Wrekin, which was very picturesque, and we were a very competitive side, so it was really good fun. We are very lucky in Shropshire to have to many good club cricket grounds that are so well looked after. Although I played all round the country, I enjoyed playing for the county in home matches and playing all around Shropshire. The Kensington Oval in Bridgetown, Barbados was also very nice.

Team mate which made you laugh the most? That’s a difficult one as there’s so many. Malcolm Nash, the former Glamorgan bowler, made me laugh. I played a season with him for Shropshire and he bowled left-arm trundle, medium pace. His record speaks for itself really. I would make the comparison that these days athletes come charging in and bowl at 80 or 90 mph, whereas Malcom would turn up, bowl off 15 yards, swing the ball a lot and get the top order batsmen out. He was a funny bloke on and off the pitch.

Joe Smith, Paul Pridgeon and Pete ‘Snicker’ Dawson were always very funny. To save petrol, Snicker bought himself a motorbike to come to the games on, but he would get his wife to deliver his kit at the ground!

I had a lot of fun with Derek Ashley and played a lot of cricket with him, and there were others like Spot Davies and James Ralph. I remember having an altercation with Ralphy once in the shower after a match. Tempers got a bit heated and the soap was flying, but from the ups and downs of cricket we then ended up as good friends. He was a top player and with a bit more self belief he could have played at the very highest level.

What did you enjoy most about playing for Shropshire? I enjoyed the involvement with the club and the camaraderie that comes with it. Even now, it’s nice to reminisce and enjoy the times we had. There was also a good social side when you played for Shropshire. You would see people pulling their sweaters on and being proud to play for the county.

Having been privileged to play a lot of games, it was always nice to see new people coming in and playing to see what they got out of it. Captaining the side for four or five years was something I was proud of and we had a good run of results. We punched above our weight with a lot with the results we had through that era. Sadly, there was no silverware, but we weren’t far away.

If you had a good day, that first pint on a sunny evening when you’ve sat down on the bench and have perhaps won the game, you’re still sweating, the sun’s still out, and you are with your team mates, having a chat and a laugh, that’s what I really remember from my Shropshire days.