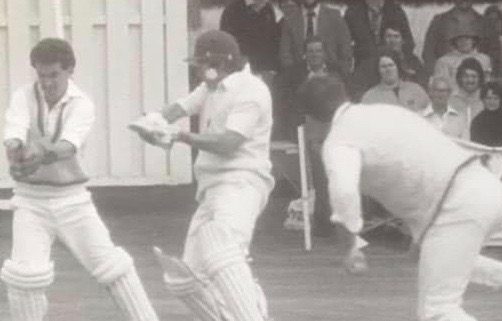 Derek Ashley, a consistent and popular wicketkeeper for Shropshire between 1982 and 1992, was part of the county side which famously beat Yorkshire in the NatWest Trophy in 1984.

He played 75 Championship matches, taking 122 catches and completing 66 stumpings, while he also chipped in with useful runs down the order.

The Yorkshire match was the highlight of Derek’s 21 one-day appearances for Shropshire, which produced a further 23 catches and eight stumpings.

His impressive form for Shropshire led to recognition when he was called up to play for the Minor Counties representative side against the New Zealand tourists in a three-day match at Norwich in 1986.

Derek spent more than 30 years playing in the Shropshire League for Whitchurch, his home town club where he continues to live, and he later also enjoyed spells playing for both Shrewsbury and Oswestry.

When and where did you start playing cricket? I always played in the garden at home in Whitchurch with my dad and then I started playing at Whitchurch Cricket Club when I was 12 or 13. We were a sporty family – my grandad was a decent footballer.

You had to pay a playing membership at Whitchurch and as I had five siblings, my mum and dad struggled to afford to pay it as they were hard times in the mid-1960s, but Walter Clay, who was my geography teacher, a lovely man and club cricketer at Whitchurch, kindly paid it for me. I can remember like yesterday when Walter paid my first sub and, obviously, the rest is history.

What’s your earliest cricketing memory? I went to Whitchurch, believe it or not, as a slow left-arm bowler. I remember my first game for Whitchurch, a Sunday game at Chirk AAA, and I didn’t get a bowl and batted at 11. One of our openers carried his bat to end 10 or 11 not out. I thought I would never play cricket again after that game as I was bored, but thankfully I did.

I became a wicketkeeper after working out that he was the busiest man in the team because he was always involved in the game. It came quite naturally to me and I just did it. There was no coaching. I was still at school at Whitchurch Secondary Modern at the time.

Biggest influence on your career? Bert France, who was my PE teacher. A lot of people in the county will know Bert as he used to run the Shropshire under-15 side and I played for that team. My dad Alf used to run me round everywhere and I would also say playing for the cricket team at Rubery Owen, which was a factory in Prees where my dad worked. He was also the team’s umpire. I would play for their Sunday XI alongside players who played on a Saturday for Wem and Whitchurch, so that was also a good experience for me. I went on to do my apprenticeship there.

Most memorable match you played in? There’s loads to choose from, but I’ll pick just a couple. At club level, it was playing for Whitchurch against Ludlow when I managed to get three stumpings in one over off John Roberts, two of them down the leg side off consecutive balls. John, who was such a good bowler for Whitchurch and Shropshire, actually took four wickets in that same over. John and I had a telepathic understanding.

At county level, it has to be the obvious one and being part of the Shropshire side which beat Yorkshire in the NatWest Trophy at St Georges in 1984. That was an unbelievable day. I can remember my wife was not happy that I was playing because she had booked a holiday for us. She ended up going with a friend, but I was never ever going to miss the Yorkshire game. My wife actually found out that we had won when she saw it on the news on television later that evening.

Just like with the FA Cup, you always lived in hope before big games against top sides like Yorkshire. It was probably about 20 or 25 overs into the Yorkshire innings when we were doing okay that we thought we had a chance of winning the game if we continued the way we were playing.

I remember Malcolm Nash, the former Glamorgan player, was in the Shropshire team that day and when we took the fourth or fifth wicket, he said that we’re in with a good chance of winning here. Malcolm wanted to bowl to Geoffrey Boycott and he bowled his 12 overs for 1-16. He tied him up and Yorkshire were miles behind the run rate. That’s what helped win us the game in my view. He would bowl five balls to Geoffrey Boycott and let him have one off the last ball of the over. Brian Perry then went and got him out. I ended up taking the winning catch when I caught Graham Stevenson off Andy Barnard.

Highlights of your playing days? Beating Yorkshire in 1984 has to be the top highlight, but another one would be my debut for Shropshire. It was against a good Staffordshire side at Shrewsbury, a lovely ground, in 1982. It was my first game and Brian Perry’s 100th. I was 26 at the time. Rodney Cass, who had captained Shropshire for a few years after previously playing for Worcestershire, had been the wicketkeeper before me.

I remember I was late – which won’t surprise anybody who knows me! – and when I arrived at London Road and got out of the car in a rush, I saw DS de Silva, the Sri Lankan leg spinner who was an excellent player for Shropshire, warming up and someone else having to put the gloves on.

I went into the changing room and Steve Gale just told me to take my time and to get myself ready. Steve Johnson was the captain and had told me a few days earlier in the nets at Shrewsbury School that I had been picked for the first three games and to not think that I had to do something out of the ordinary to stay in the side. I thought that was a great way of doing things.

Another highlight was being selected to play for the Minor Counties representative team against New Zealand in a three-day tour match at Norwich in 1986. I was manager of a feed mill and didn’t drive at the time. We had a sister company in Diss in Norfolk, not far from Norwich, so I had to put a 40 ton load together that they really didn’t need to take down to the factory to get a lift there. I put my cricket kit on the back of the lorry and big Jim, the driver, took me down to the hotel. As I arrived, the New Zealand team had just turned up in their coach and I was there getting my kit off the back of an animal feed lorry!

Best player you played alongside? I would say DS de Silva and Mushtaq Mohammed, the two overseas professionals who played for Shropshire in that era. They were both very, very good players. DS de Silva was playing Test cricket for Sri Lanka at the time he was with Shropshire. He bowled leg spin with a bit of pace on it. He was a great batter, a great bowler and a tremendous gully fielder. Mushtaq was a character who knew the game inside out. He had captained Pakistan and played for them at a young age.

Best player you played against? We played Somerset in the NatWest Trophy at Wellington in 1983, so the obvious one would have to be Vivian Richards. What a wonderful player. I remember him being bowled by Steve Ogrizovic in that game only for a no-ball to be called. It nipped back on him and definitely did him, so big Oggie was unfortunate. Ian Botham and Joel Garner also played for a very strong Somerset side in that match.

David Gower was another excellent player we came up against in a NatWest match and he scored an unbeaten century for Leicestershire at St Georges in 1989. I felt I should have stumped him leg side from the second ball he faced off John Roberts, but unfortunately I fumbled it. I looked up at the umpire and he just nodded his head as if to say, yes, if you had taken it clean, he would have been out. I was gutted.

I would also say Jeff Crowe and Martin Crowe, who both played for New Zealand against the Minor Counties in 1986. I actually stumped Jeff Crowe, so that’s a good memory.

Favourite ground where you have played? Whitchurch without a doubt. I loved playing there. It was literally 300 yards from my mother-in-law’s house. I also enjoyed playing at Oswestry – that was also my home ground for a few years later in my career – while the best teas were at Wroxeter, another lovely ground.

Team mate which made you laugh the most? I saw that Adam Byram mentioned me for this question and he’s one that I would choose here, both when he was a Shropshire team mate and also later on in life after cricket. I will also have to say Stuart Mason, who I played with for both Whitchurch and Shropshire, as I have so many stories about him. He was also a very good footballer and was at Liverpool for a time before playing for Wrexham and Chester.

I remember after playing at Shifnal once, I was waiting to be picked up to head off for a county match at Oxfordshire and I couldn’t find my cricket kit. I knew straight away that Mase had done something. He had only asked for a ladder and put my kit bag up a tree, so I then had to go up the tree myself and get it back!

Stuart was a funny man, the loveliest man you could meet, and we would often play pranks on each other. He ran a sports shop in Wrexham and I wanted a new pair of gloves off him. I was keen to break them in, so I got a lovely pair of gloves off Stuart and wore them for the first time in a friendly match for Whitchurch at Rydal School in Colwyn Bay. I put them on during a drinks break and after getting them out of the bag, I thought there was something wrong with them as I was running back out. I then realised that Stuart had put jam in my brand new gloves to make the ball stick as I had missed an easy catch for Whitchurch the weekend before!

What did you enjoy most about playing for Shropshire? It would be the camaraderie and the friendship from playing alongside so many good people. It still goes on now as I phone one or two people up and we have a chat. Playing for Shropshire really was like being part of one big family and I was always so proud to represent my home county.

Pictured: Wicketkeeper Derek Ashley in action for Shropshire in the NatWest Trophy match against Somerset at Wellington in 1983.