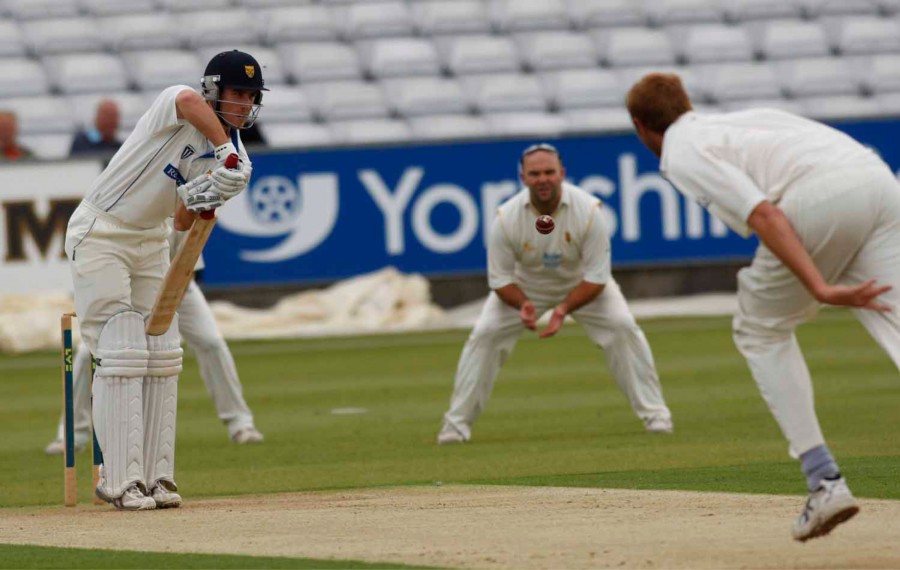 Ed Foster captained Shropshire for three seasons, leading the county to victory in the Minor Counties Knockout Trophy in 2010, his first year at the helm, when he hit an unbeaten 95 in the final against Lincolnshire at Durham CCC.

The consistent left-handed opening batsman made his Championship debut for Shropshire against Cornwall at Bridgnorth in 2004.

He also made 33 one-day appearances for the county, hitting two centuries – with an unbeaten 126 his top score – and eight fifties as he averaged 42.

Ed had spells with both Worcestershire and Leicestershire earlier in his career and played first-class cricket for Loughborough University.

He scored more than 10,000 Birmingham League runs for Shrewsbury during a long association with the London Road club before joining Alderley Edge, closer to where he now lives, at the start of the 2019 season.

Ed’s dad, John, also captained Shrewsbury and Shropshire while he played alongside Rob, his younger brother, for both club and county.

When and where did you start playing cricket? I started playing around the boundary at Shrewsbury Cricket Club when my dad, John, was playing for the club. I can’t remember when specifically, but I spent pretty much all my childhood summers at the club or wherever it was that Shrewsbury were playing. I would play around the boundary with my brother Rob and James Gale.

We would spend hours on the field at the back of the first team pitch, which is now the car park, just playing our own games. Then when the first team game had finished at Shrewsbury, we would come out to the front and play to our own crowd of the cricketers that had finished the proper game during the day.

That back field at Shrewsbury Cricket Club and our front drive in Gains Park was where Rob and I spent much of our cricketing upbringing really until we started playing proper matches.

What’s your earliest cricketing memory? It just has to be watching cricket at Shrewsbury, the games my dad was playing in as they were taking place. I remember my first game for Shrewsbury’s under-11s against Kingsland Grange School and also some winter nets around the same time for Shropshire, training indoors at Wrekin College, where I first met the likes of Jono Whitney, Mark Robinson and Jonty Mountford.

Biggest influence on your career? I would probably have to say my dad. He introduced me to the game of cricket and a lot of people at Shrewsbury also helped me. It’s hard to say one person to be honest. Gordon Lord at Worcestershire was really influential when I started there, as was Neil ‘Noddy’ Holder, a batting coach, when I played in Perth in Western Australia – that’s where my game really started coming together properly technically. I spent a lot of time with him and I owe a lot to him. Graham Dilley, who was head coach when I was at Loughborough University, was really helpful, always really positive. All four played key parts.

Most memorable match you played in? It’s hard to say just one as three matches really stand out. Shropshire beating Lincolnshire in the 2010 Minor Counties Knockout final at Durham CCC when we chased down 249 was fantastic.

A couple of weeks later Shrewsbury went to Kidderminster for a winner-takes-all shootout to decide who would win the Birmingham League. Elliot Green took nine wickets as we won a massively memorable match.

Possibly the best one would have to be the National Knockout final victory with Shrewsbury at Derby in 2011, just for the prestige that it brings and the history of Shrewsbury, the fact that we had a generation of cricketers following in the footsteps of their parents who had done the same for the club at Lord’s years earlier.

All three of those games were really special, not just because they were big stages and we won all three, but the company that was kept on those occasions, with friends for life essentially. To win some of the biggest matches of your career with your best friends made it even more special and are great memories.

Highlights of your playing days? Something that has become more evident since I moved away from Shrewsbury is actually just reflecting on the time I spent with a really good group of people.

You could say the individual performances in matches for Shrewsbury and Shropshire, scoring a first-class century for Loughborough University against Essex, matches for Worcestershire, playing at Lord’s or in Australia and South Africa, all things like that, but actually, if you look back, I think it was the fact that I was able to have everything that’s happened and spend that time with some really good lads with both club and county and have some really great memories.

Best player you played alongside? Moeen Ali in the second team at Worcestershire and Jimmy Taylor at Shrewsbury, Worcester and Leicestershire. We seemed to follow each other round for a while until he really took off. Two very talented cricketers that I spent a lot of time playing cricket with during the early parts of their careers. It’s no surprise that they went on to achieve what they have.

Thinking of Shropshire lads, and excluding those that were professionals or progressed into the first class game, there’s three guys that were almost ever present in the games I played in – Jono Whitney, James Ralph and my brother Rob. Each of those were great cricketers for Shropshire and responsible for winning numerous matches for the county.

Best player you played against? I’ve been lucky to play against quite a few. Darren Gough may have been past his prime when I played against him, but he was a pretty impressive cricketer. Andy Caddick made me look pretty daft one muggy morning at Taunton. Marcus Trescothick played in that same match – he didn’t have too many problems.

Favourite ground where you have played? I would have to say Shrewsbury just for the volume of cricket I’ve played there. Notable mentions to New Road at Worcester, while I really like Bridgnorth and Shifnal. They are nice places to play cricket and good pitches as well, which is always important. We’re really fortunate in Shropshire with the number of good quality grounds.

Team mate which made you laugh the most? Dan Manders at Shrewsbury was always up for a laugh, a great character. My brother has his moments too. With Shropshire, a couple of the Wellington lads, Anthony O’Connor and Mark Downes, were always good fun, as was Richie Oliver, more often than not for what he was up to!

What did you enjoy most about playing for Shropshire? I felt the level of cricket, the standard, was very good, particularly the one-day competition. You tended to find that counties put out their best team because they had good availability at weekends when the one-day matches were played. I think teams were stronger than they would often be over three days for a Championship match.

It was a good quality game of cricket and we had a really good side at times. It was a shame that we couldn’t put it out a little bit more often, but to play in a Shropshire team that had a really good chance of winning things was always good fun.