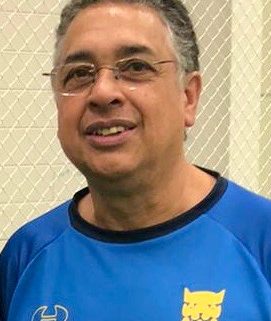 John Abrahams, delighted to return to Shropshire during the winter as the club’s Director of Cricket, enjoyed a long and successful playing career.

A left-handed batsman and right-arm offbreak bowler, John represented Lancashire from 1973 to 1988. He was also captain at Old Trafford for two seasons.

John joined Shropshire in 1989 and was midway through his third season playing Minor Counties cricket when he received the opportunity to begin a coaching career with the ECB, quickly progressing to work with a number of England age group teams in both coaching and managerial roles.

John played 18 Championship matches for Shropshire, scoring 1,666 runs at an impressive average of 64.07. He also took 53 Championship wickets at 25.67.

Mum scored for the family cricket team and her brother was also apparently a fine batsman with a good technique. My father, Cec, played club and provincial cricket well enough to be selected for the South African non-white team during the era of apartheid and played against neighbouring African countries.

He was offered the role as professional for Milnrow Cricket Club in the Central Lancashire League in 1961 and the family followed in 1962. It’s where we have made our home and where the majority of the family still lives. My brothers, Basil and Peter, were also club professionals locally.

What’s your earliest cricketing memory? The earliest memory was watching my dad play club cricket on a matting pitch that had been rolled the previous evening. On occasions players would still arrive to find that cycles or horses had ridden across the rolled shale. Cricket was a family occasion with brothers, sisters, aunts, uncles and cousins having a picnic outside the boundary.

Biggest influence on your career? As well as my father who influenced in an informal way, my first real coach was Fred Hubbard. He looked after Milnrow Cricket Club’s third team and started the process of educating me in the ways of cricket with its traditions, its values, the expected standards of behaviour and the respect that the game and all involved deserve.

At Lancashire, the two players who I admired and learnt from most were Harry Pilling and Clive Lloyd. Clive probably doesn’t need any introduction. As the captain of the West Indies and our overseas player, he took me under his wing. Whenever I was going through an indifferent spell, he would insist on taking me to away matches in his car and during the journey would informally talk me through any problems and any potential solutions.

Harry Pilling was small in stature and huge in courage and heart. People compared him to Blackpool rock as if you sliced him across the middle you would find Lancashire running all the way through him. He was once hit in the jaw by a delivery from West Indian Andy Roberts. He came off to have his swelling lower jaw supported by a huge white wrap around bandage and went to bat at the fall of the next wicket. Both contributed to my education and development as a county cricketer.

Most memorable match you played in? It has to be the Benson & Hedges Cup final against Warwickshire in 1984 for a number of reasons. Lancashire was the most successful one-day team when I first joined and we had reached three semi-finals in previous years without progressing.

Having captained for part of the 1983 season in Clive’s absence, this was my first year as official full time captain. We were a young side with three experienced senior players and one of our strengths was the high standard of fielding which had also contributed to previous successes.

Winning the toss helped as it allowed us to execute our game plan of restricting the opposition and then chasing whatever they set. Everything went to plan and we bowled them out for 130 and knocked them off quite easily. Despite not bowling and scoring a duck, the man of the match adjudicator Peter May nominated me for my leadership. A big surprise and a great way to finish an excellent game.

Highlights of your playing days? There were a few, only because they stand out among some ordinary performances and events. As well as the Benson & Hedges Cup final at Lord’s, my highest first-class score was also against Warwickshire at Nuneaton. The maiden century was against Yorkshire at Old Trafford, a big game in the county fixture list.

For Shropshire, there were many enjoyable moments. A couple that stand out are the hat-trick at Newport against Dorset, the only one in my long career, and a century in each innings against Buckinghamshire at Wellington in 1990.

Best player you played alongside? I have already mentioned Harry Pilling and Clive Lloyd. The other Lloyd, David, has very good knowledge of the game from a tactical point of view, understanding situations and players. When appointed captain I made sure that David was my room-mate so that we could discuss the day’s play and listen to any thoughts, ideas or suggestions he would have in preparation for the following day.

Lancashire was fortunate enough to have some quality overseas players and they all contributed to the club’s performances. They include Farokh Engineer, Colin Croft, Michael Holding, Patrick Patterson and Wasim Akram. Local Lancashire players would have to include Jack Simmons, a stalwart for the county, and young internationals Neil Fairbrother and Mike Atherton.

Best player you played against? There’s really too many to choose from. Overseas players include Viv Richards, Andy Roberts, Malcolm Marshall, Majid Khan, Imran Khan and Zaheer Abbas. English players would have to be Derek Underwood, Alan Knott, Mike Hendrick, John Jameson, Sir Ian Botham and David Gower. It would be unfair to single out one or two as they were all exceptional in their own rights and graced any cricket field they played on.

Favourite ground where you have played? There is an element of bias in this answer as Old Trafford comes out on top. The first time I went there as an 11-year-old it looked absolutely enormous and very grand. Then to spend 17 seasons with it as your home ground was a pleasure and a thrill being able to turn up there regularly. Some of the happiest and exciting moments of my career occurred there. It still gives me goosebumps when I go there to observe players and matches, even though it has changed and grown so much.

Team mate which made you laugh the most? Players I have mentioned already also had good senses of humour. Harry Pilling and David Lloyd helped the atmosphere in the dressing room and contributed to team spirit. Both naturally funny men with typical northern mischief and fun. When first joining the county club, Lancashire that is, the team was not only successful but included players who had grown up together led by a father figure in Jack Bond, bless him. The dressing room therefore was a happy one with typical banter and ‘in’ jokes.

What did you enjoy most about playing for Shropshire? What made it easy to enjoy playing for and wanting to be successful for Shropshire was initially the warm welcome that I was given, how I was made to feel at ease and at home. Not only by the players, but the committee, club officials, members and spectators. They were genuinely interested in how the team and I were doing.

Any success was greatly accepted and appreciated and if performances weren’t perfect they still showed their support. The club was also very generous in including my wife and young family, allowing them to attend matches whenever possible. Having been disappointed at being released from Lancashire, joining Shropshire gave me an opportunity to play at a high level and make further contributions to this great game.