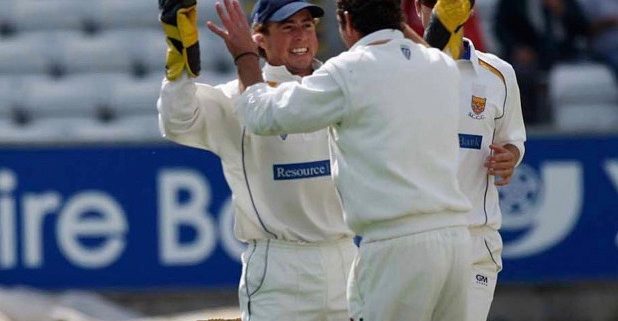 Wicketkeeper Matt Tilt was vice-captain to Ed Foster when Shropshire lifted the MCCA Knockout Trophy by beating Lincolnshire in 2010.

That memorable day at the home of Durham CCC was the best moment of his 12-year Shropshire career, with Matt taking four catches as Shropshire won by seven wickets.

He made his Championship debut against Devon at St Georges, his home club, at the age of 17 in 1999 and went on to represent his home county in 53 Championship and 36 one-day matches.

Matt held onto 99 catches and completed 12 stumpings for Shropshire in the Championship, also weighing in with 1,128 runs, with a highest score of 80 not out, at an average of 24.

One-day cricket produced a further 36 catches, 11 stumpings and a batting average of 18.78.

Matt played six matches for Surrey’s Second XI earlier in his career after impressing in a NatWest Trophy game for Shropshire against Surrey Cricket Board.

When and where did you start playing cricket? In terms of organised cricket, it was the juniors at St Georges Cricket Club. My brother Stephen, who is three years older than me, played cricket and was in the junior set up at St Georges so I followed him there.

What’s your earliest cricketing memory? Many clubs survive on a small number of core people and Ron Davy was one of these at St Georges. I remember attending his junior coaching evenings and occasionally he would take a few of the lads on day trips to watch Worcestershire. We were too young to understand what was going on in the middle, but I have fond memories of playing on the outfield during the lunch and tea breaks, and also watching the players in the nets.

Before that, it would have been playing cricket at home or on holiday with the whole family. It would get very heated and competitive with three older brothers but I remember it being a lot of fun.

Biggest influence on your career? My dad has to be one of the biggest influences. He played cricket for Warwickshire Colts and was also a wicketkeeper. I remember playing on the outfield at Broseley when he was finishing his club playing days. It was his suggestion for me to take up wicketkeeping after he had seen my bowling efforts. My mum and dad came to pretty much every game that I played in from the start and supported and encouraged me all the way through.

There was also that sibling rivalry with Stephen. He also played Shropshire junior cricket and I was always striving to be as good as he was when we were playing at home or spending hours practicing together in the nets.

Particularly on the wicketkeeping front, Gerry Gladwell from Newport Cricket Club used to run master classes and coaching sessions at Lilleshall which I attended on a weekly basis from an early age. Gerry would send me his signature post cards with supporting messages right the way through my career. Whenever he came to watch a game, I would always enjoy an hour or so with him afterwards to listen to his analysis of my performance, to see what he had spotted in my technique that I could improve on. Equally, if it had been a bad day for me behind the stumps, he would help raise my spirits and confidence for the next day by reminding me about things that had gone well.

I also learnt a lot from Chris Cadman at St Georges and Wroxeter. He knew how to win and how to build a successful and special team environment. I haven’t come across a better man manager than Caddie in sport or business.

Most memorable match you played in? The one that I’m most proud about would be the Knockout final win in 2010 when we beat Lincolnshire at Chester-le-Street. It was the first trophy Shropshire had won in quite a few years, so I was very proud to be part of that as vice-captain to Ed Foster, a fantastic cricketer who led that team really well.

I remember Jono Whitney and myself having a good partnership against Northumberland at Oswestry in one of the earlier rounds in the competition that season after we had been struggling at 93-7.

Beating Ireland away in the NatWest Trophy and playing against a Somerset team that included Marcus Trescothick and Andy Caddick at a packed St Georges were memorable. I was lucky enough to play in some good fixtures in front of some large crowds as Shropshire are always so well supported. The Trophy final against Cambridgeshire at Lord’s, Warwickshire at Edgbaston and Hampshire at Whitchurch were others that stand out.

Highlights of your playing days? My debut for Shropshire in a Championship match against Devon at St Georges in 1999. I was 17 and still at Wrekin College at the time. I took a decent catch off Andy Barnard in that match and then ended up playing with Mike and against Steve, two of his sons, a few years later.

A memory which is slightly embarrassing in some ways is being involved in Shropshire’s record last-wicket stand with Ben Platt in a match against Herefordshire at Whitchurch in 2000. I remember going in and batting late at night when we were in trouble. Platty hit the ball to all parts and got a hundred off something like 70 balls. I pretty much stonewalled it at the other end. It ended up being an unbroken stand of 107 and I contributed two, but in the grand scheme of the game it kept us in it, and Ben’s dad bought me a pint to celebrate.

My 100th Championship dismissal was a stumping off Andy Gray against Wiltshire in 2010. It was a proud personal milestone having completed 1,000 Championship runs for Shropshire just before that.

Best player you played alongside? I played the odd game with a few internationals. Chris Rogers played a one-day match for Shropshire at Oswestry and went on to have such a good career with Australia. Jimmy Adams, the former West Indies captain, was our pro at Wroxeter, so you can’t really get much better than that.

I played with Ben Hollioake at Surrey and also Monty Panesar at Loughborough University.

Of the players I played a more prolonged amount of cricket with, I would pick out a few all-rounders. Duncan Catterall was impressively consistent with both bat and ball. I played a lot of cricket with Steve Taylor at St Georges and Shropshire and would put him right up there when he was at his peak. Andy Gray was a fantastic off-spinner who could change games and always put the opposition under pressure on any kind of surface. His record for Shropshire speaks for itself and he demanded that you were at the top of your game.

Best player you played against? Shoaib Akhtar turned up to play in a Birmingham League game when I was captain at St Georges. He was trying to prove his fitness to get back into the Pakistan test team, so that was interesting to see him running in.

One of the games I played for Surrey was a match against Warwickshire’s 2nd XI at Leamington. I remember we put them in for 10 or 15 overs at the end of the day and Kevin Pietersen then smashed about 70 when most teams would just try and see themselves through to the end of the day. Luckily I managed to hold on to him off Carl Greenidge and also caught Charlie Dagnall in the same game off Ben Hollioake.

But the number one has to be Shane Warne when Shropshire played against Hampshire at Whitchurch in 2005. That was a strong Hampshire side with the likes of Kevin Pietersen and lots of other very well known players in the team. They took it seriously and Pietersen again got 70 odd. Shane Warne got me out lbw, but I was convinced it was outside the line. Now, all these years on, I’m actually quite happy to have a legend of the game having dismissed me on that day!

Favourite ground where you have played? I played at Lord’s for Shropshire and The Oval a couple of times for Surrey. Shropshire’s got a lot of beautiful grounds but on the basis that we always seemed to get a positive result whenever we played at Oswestry, I would plump for there. Early on in my career for Shropshire we played grade cricket rules, and I’m pretty sure I kept for 130 overs in one day at Oswestry with Adam Byram and Asif Din competing with each other on who could complete the quickest over. I certainly got to know the pitch pretty well.

Team mate which made you laugh the most? Adam Shimmons was hilarious at Wroxeter and Shropshire. Shimmo was entertaining on the field and great fun in the changing room. He was a seriously good bowler and would run in forever but he always had a way of calming things down and putting everything in perspective if you were taking the game too seriously. Shimmo always had plans if we had a few hours down time. At the end of one day, he got a few of us to go body boarding in the rain. We went down to the beach and we gave our mobile phones to Claire Green to keep safe. Claire was paddling as we came through on the waves knocking her over and wrecking all of our mobiles!

I spent a lot of time travelling to games with Tony Parton. He would always keep everyone entertained and chirpy. I miss his full on renditions of Frank Sinatra.

What did you enjoy most about playing for Shropshire? I enjoyed the challenge of three-day cricket and that exhausting feeling at the end of the day when you’ve really pushed yourself to your limit. It’s a great feeling to have given everything you have and to sit on the outfield at the end of a day’s play celebrating team or individual successes. The camaraderie was special and I’m glad to have had that with Shropshire for 12 years.

Pictured: Wicketkeeper Matt Tilt celebrates the dismissal of a Lincolnshire batsman during Shropshire’s seven-wicket victory in the 2010 MCCA Knockout Trophy at Chester-le-Street.

No competitive NCCA cricket to be played this season – but counties are...
Scroll to top