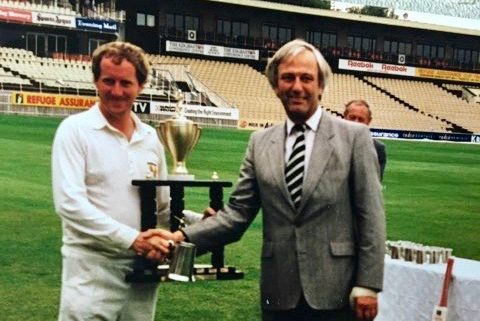 Steve Gale played 108 Minor Counties matches for Shropshire between 1975 and 1987. A middle order batsman, he scored 2,865 Championship runs and captained the county in the 1985 season.

Steve played a starring role by scoring a half century when Shropshire memorably beat Yorkshire in the NatWest Trophy in 1984.

He captained Shrewsbury, his home town club, to National Knockout victory at Lord’s in 1983 during a long association with the London Road club which featured three spells as skipper.

Steve later enjoyed 10 seasons as a first-class umpire up until 2017 and continues to live in Shrewsbury.

When and where did you start playing cricket? The old County Ground at Frankwell in Shrewsbury when I was aged 10 and living in Coton Hill. I would cycle down when the Evening League games were being played hoping that a team might be short and that I would get a game. Different teams used to book the ground and I would just hope they were one short and needed a fielder. That was my first taste.

What’s your earliest cricketing memory? Playing for Frankwell Cricket Club when I was 14. In that era, I think they were mainly friendly games. It was good fun. They were my local club as I lived at that end of town and went to the Lancasterian School.

Biggest influence on your career? Rodney Cass and Alan Durban. Rodney played for Worcestershire and Tasmania before joining Shropshire and I learnt a lot about positive captaincy from him. He had a few years as Shropshire captain and when you look back over your career and you play under a large number of captains, you would hope to pick out the best bits of each captain you played under. I would have got more from Rodney than some of the other captains I played under.

Alan Durban got the player-manager job at Shrewsbury Town Football Club after coming from Derby County where he played under Brian Clough. He only played two or three seasons at Shrewsbury Cricket Club, but he brought a professional outlook to an amateur club really. Myself and Richard Tudor managed to pick up some bits and pieces from his professionalism and he was a winner as well. I just hit it off with him and he has a massive influence on the club as we were starting to improve.

Most memorable match you played in? Shrewsbury winning the National Knockout final at Lord’s in 1983 and then being part of the Shropshire side which beat Yorkshire in the NatWest Trophy the following year.

We had been knocking on the door to reach the final at Lord’s for a few years. We had to win nine or ten games to get to Lord’s as 512 clubs entered the competition. That was just a team that all came together at the right time.

Steve Ogrizovic had just come and, even though he didn’t play in the final as he was on Shrewsbury Town duty, he added to what we had as a fast bowler. Andy Barnard was at his peak. It was a young side but had a lot of experience as we had been together for quite a while. Ken Mulhearn, Richard Tudor, John Foster and myself had been together for some time, but most of us were still in our early 30s.

We got three wickets in the last over to beat Hastings and win the game. It was unbelievable as you would probably lose 99 times out of 100 in that situation, but that was the winning mentality we had.

Beating Yorkshire with Shropshire in 1984 was another very special day. We were three down in front of a big crowd at St Georges and then Mushtaq Mohammad and myself put on over 100. I went in at five and I remember Mushy had an unbelievable close call for lbw almost as soon as I went in. He got away with it and went on to get 80. I got 68 and we managed to get a competitive score.

That was a strong Yorkshire side with Boycott, Moxon, Metcalfe, Bairstow and Kevin Sharp, who later came and played for Shropshire. It was just one of those great days.
We went to Warwickshire in the next round and also actually played quite well at Edgbaston.

Highlights of your playing days? It has to be the Lord’s win and then beating Yorkshire the year after. Captaining Shrewsbury to victory at Lord’s was very special. I’m Shrewsbury born and bred and I’m very proud of the county.

Shropshire have always been very good at punching above their weight. It’s a small population compared to a lot of the teams we are up against and it works in your favour sometimes. We had nothing to lose against Yorkshire. If we had lost heavily, that’s what everyone would have expected, so you actually played without any pressure.

Best player you played alongside? We had some very good overseas players when I was playing for Shropshire, so I would say three of them in DS de Silva, Mushtaq Mohammad and Vanburn Holder.

DS de Silva played Test cricket for Sri Lanka. I think he was playing in the Lancashire League at the time he joined us. He was a superb leg spin bowler and batted at number four. He was just a high-quality cricketer and was fantastic in Minor Counties.

For Shropshire to get Mushy, even though it was at the end of his career, was a great signing. He had a stunning Test record for Pakistan and played in the County Championship for Northamptonshire for a long time. If you batted with him, like I did in that Yorkshire game, it just showed the difference between a Test player and a county player. I was lucky enough to play with him.

We also had Vanburn Holder for a time at Shropshire and I later also umpired with him. He was another top player for Worcestershire and the West Indies.

Best player you played against? Richie Richardson, who went on to captain the West Indies, played for the Durham Senior League against the Shropshire League. He was a young Richie Richardson then and looked a class player.

Richard Hadlee played against Shropshire for Nottinghamshire in a pre-season match at Market Drayton. He bowled five overs against me and never bowled a ball off the stumps. He was unbelievable. He took more than 400 Test wickets for New Zealand.

We also played against Sylvester Clarke, the West Indies fast bowler, in a pre-season match when Shropshire were invited to play Surrey at The Oval. He bowled at 90+ miles per hour on a quick wicket. We had a very close game with Surrey in the Gillette Cup at Wellington when they had just beaten us, so they offered us a pre-season game at The Oval the following year. I had never seen pace like it. Even though it was a non-competitive game, he was still trying!

Favourite grounds where you have played? Lord’s, Trent Bridge and New Road. We played Midlands Knockout finals for the Shropshire League at both Trent Bridge and Worcester. New Road has always been a favourite of mine. It’s got character and tradition.

Team mate which made you laugh the most? Rod McCurdy, an Australian who spent the 1979 season playing for Shropshire. He bowled at an unbelievable pace and played for Australia. He loved playing cards but he was the worst card player in the history of playing. Three or four of us would have a game with him on the first night of a Championship match and generally clean him out of his match fee!

What did you enjoy most about playing for Shropshire? Having always lived in Shropshire, I am very proud of this county and to have represented Shropshire County Cricket Club more than 100 times. It was good fun and we had a settled side a lot of the time. It was almost like a club side. To have played more than 100 games is an achievement that I am proud of.

Pictured: Steve Gale, left, who played 108 Minor Counties Championship matches for Shropshire and enjoyed lots of success as a captain throughout his career, is presented with more silverware after leading the Shropshire League to victory in a Midlands Knockout final at Edgbaston.