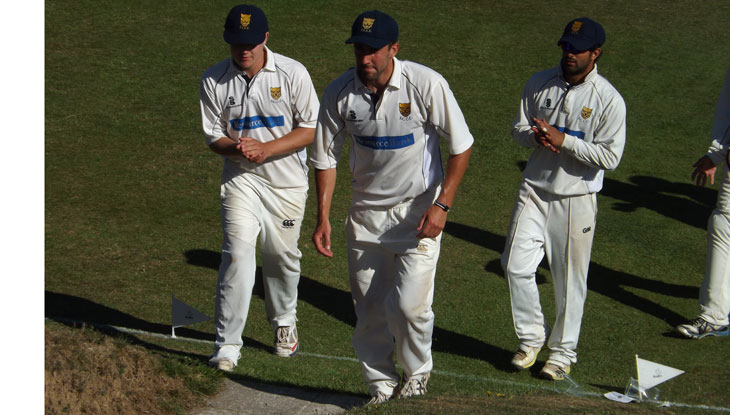 Paceman Ben Sanderson claimed a brilliant seven wickets in each innings as Shropshire’s young side made it back-to-back Unicorns Championship wins with an impressive victory inside two days against Cornwall.
The former Yorkshire seamer proved too hot for the Cornish batsmen to handle as he recorded best-ever match figures of 14 for 108 from 35.5 overs at St Austell.
Cornwall had just no answer to the impressive Sanderson as Shropshire, well led by captain James Ralph, back at the county helm for a second time, built on the exciting victory achieved over Oxfordshire at Bridgnorth earlier this month.
Shropshire will now be chasing a third successive Championship triumph when they return to the south west to take on Devon at Exeter between August 3 and 5.
“It was another remarkable result for our young team,” said Brian Foxall, Shropshire’s delighted chairman of selectors. “It’s really pleasing to have a side with so many young players playing so well.
“Ben Sanderson was absolutely magnificent and he had never taken as many as fourteen wickets in a match before. He looks fitter than we’ve ever seen him and he’s bowling so well.
“He was well backed up in the first innings by Ross Aucott before Jack Edwards got two wickets in the second innings.”
Cornwall opted to bat first but were quickly up against it as they were bowled out for 188. Christian Purchase offered some resistance with a defiant 83, but Sanderson ensured Shropshire held the upper hand by taking 7-57 from 17.4 overs. Aucott also played his part by claiming 3-44.
Shropshire’s reply was given solid foundations by an opening stand worth 90 from Steve Leach, who struck 72, and Joe Carrasco (32).
Skipper Ralph (50) and Ryan Lockley (43) also kept the scoreboard ticking over as Shropshire were eventually dismissed for 300.
Lightning struck twice in Cornwall’s second innings with the on song Sanderson grabbing 7-51 from 18.1 overs while Edwards helped himself to 2-15 as the hosts were removed for 203.
That left Shropshire with a victory target of 92 and, although they were soon in a spot of bother at 8-2 with both openers out, they remained calm.
Ralph called on all his experience to hit 33 and young Oswestry debutant Robbie Clarke added a determined 30 as Shropshire progressed to 92-4 to seal victory.
“The captain came in when the second wicket fell and played very positively,” added chairman of selectors Foxall. “He settled things down and really took the game away from them.
“Robbie Clarke also battled very well and got a  gutsy 30.
“I’m just so pleased for the players as the young lads that have come into the side have really shown they can play at this level.”
Sanderson is pictured leaving field at end of Cornwall’s second innings.
http://www.shropshireccc.co.uk/wp-content/uploads/2014/07/Cornwall-2014-016.jpg 415 730 Brian Foxall http://www.shropshireccc.co.uk/wp-content/uploads/2013/12/SCC-Website-Logo-340x156-WhiteText.png Brian Foxall2014-07-23 15:21:332014-07-23 15:23:13Super Sanderson sets up two day victory
Team to face Cornwall