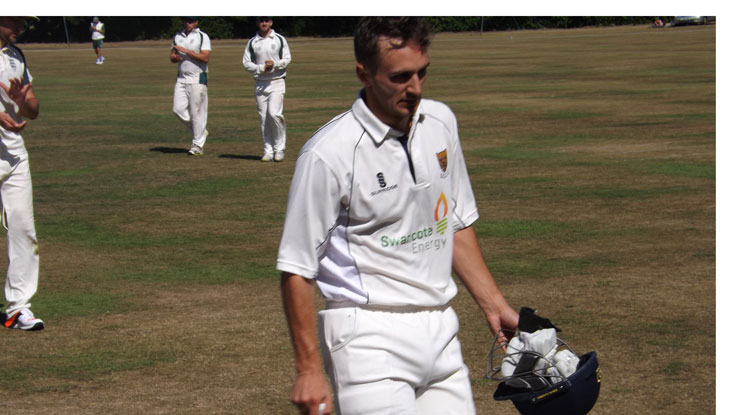 Shropshire coach Karl Krikken admitted he was left frustrated that his side narrowly pulled up short in their quest for a Unicorns Championship victory at Dorset.
Shropshire, who remain unbeaten in three-day cricket this season, instead headed home from Bournemouth’s Dean Park reflecting on a third successive away draw.
Dorset had been chasing 215 for victory on the final afternoon, but fell away from 85-0 to close on 188-8 with Shropshire just unable to complete an excellent fightback with the ball as captain James Ralph helped himself to five wickets.
Krikken said: “It’s a game we could have won, so in that respect it’s a bit frustrating. It looked a foregone conclusion the way Dorset started their second innings, but we battled back magnificently and it was quite an exciting game in the end.”
Krikken insisted there were plenty of positives to emerge, notably a magnificent century from Matt Higginbottom in the first innings, the consistency with the bat of opener Steve Leach, young spinner Charlie Morris taking his best-ever figures for the county and an outstanding display from Ralph on the final day.
After three successive away matches, Shropshire will now look forward to returning to home soil for their final two games of the season, beginning with Wales at Bridgnorth, a three-day clash which gets under way on Sunday, August 2.
Shropshire skipper Ralph opted to bat first on the opening morning at Bournemouth and the county showed fight to post a respectable 295 all out.
Such a total looked some way off with Shropshire, despite an impressive 85 from consistent Shrewsbury opener Leach, struggling at 57-4 and then 123-6 before Higginbottom, the former Derbyshire man, delivered a brilliant century.
Batting at No 8, Higginbottom took apart the Dorset attack, hitting 13 fours and five big sixes as he raced to a sparkling 126 from 100 balls to reach three figures for the county for the first time.
Higginbottom was involved in stands worth a combined 119 for the last two wickets, with partners Morris and 17-year-old Wellington debutant Dan Lloyd scoring 11 between them as they played valuable supporting roles.
Dorset ended day one on 171-3 and started where they left off the following morning with opener Masoor Khan, eventually out for a splendid 157, and Jake Lintott, who made 129, putting on 160 for the fifth wicket.
The south coast side were finally removed for 376, establishing a first innings lead of 81, with promising Shrewsbury spinner Morris plugging away to claim 6-127 from 26.3 overs, comfortably his best figures for the county, as he was given plenty of chance of impress in the absence of Gurman Randhawa.
Shropshire were also without opening bowler Ben Sanderson in the Unicorns Championship for the first time this season after he was called up for his Northamptonshire debut against Derbyshire in the second division of the County Championship.
Shropshire’s second innings was a mirror image of the first as again they were dismissed for 295.
Ralph led the way with 71, sharing in a fifth-wicket stand of 116 with Ryan Lockley, who made 53, while there were also decent contributions from Leach (48) and Oswestry’s Robbie Clarke (45).
That left Dorset chasing 215 to secure their first win of the season from a minimum of 37 overs and they made a flying start, their openers quickly putting on 85 before Khan fell to a Will Parton catch off Ralph.
Fortunes then ebbed and flowed but, with Ralph claiming an excellent 5-55, Shropshire, who collected 11 points to Dorset’s 12, ended strongly and the hosts pulled up short of their target on 188-8.
Brian Foxall, Shropshire’s chairman of selectors, said: “We’ve been close on a couple of occasions now recently without quite being able to secure a win.
“We are still unbeaten but it could have been so much more.”
Pictured: Shropshire’s Matt Higginbottom – hit a brilliant century in the first innings for Shropshire against Dorset at Bournemouth.
Stuart Dunn
http://www.shropshireccc.co.uk/wp-content/uploads/2015/07/Dorset-2015-0071.jpg 415 730 Brian Foxall http://www.shropshireccc.co.uk/wp-content/uploads/2013/12/SCC-Website-Logo-340x156-WhiteText.png Brian Foxall2015-07-22 15:18:112015-07-22 15:18:11Third successive away draw for Shropshire’s cricketers
Late change for trip to Bournemouth