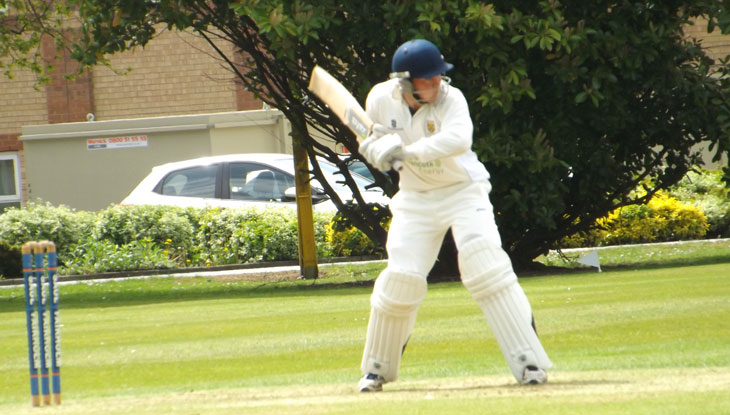 Shropshire’s cricketers are hoping the Unicorns Championship suits them rather more than the Unicorns Trophy after they slipped to a fourth successive defeat in the one-day competition.
Shropshire went into their final group game against Lincolnshire at Bracebridge Heath knowing qualification was already beyond them.
But they had been targeting further progress in the right direction after running Northumberland close at Oswestry a week earlier when they were narrowly beaten by six runs.
Skipper James Ralph and Robbie Clarke both cracked half centuries, but it was not enough to prevent a seven-wicket defeat against a Lincolnshire side boasting two centurions in Sam Kelsall and Carl Wilson, the hosts sealing victory with more than 11 overs to spare.
Brian Foxall, Shropshire’s chairman of selectors, admitted his side could have no complaints about the outcome, but he is already looking forward to the start of the Championship season.
“We’ve always felt we might be better suited to three-day cricket in the Championship, so hopefully that will prove to be the case,” he said. “That’s not to say we’re not disappointed as we wanted to do well in the one-day competition. We’ve just got to pick ourselves up now for the Championship.”
Shropshire, without Joe Clarke, who hit a ton against Northumberland, and also in-form Shrewsbury opener Steve Leach, batted first for the first time this season but were soon in trouble at 10-2 with Ryan Lockley and Adrian Evans both failing to trouble the scorers.
Skipper Ralph and Clarke set about repairing the damage by putting on 79 for the fourth wicket before Ralph fell for 50 from 74 balls, a second successive 50 for the experienced Bridgnorth batsman.
Oswestry’s Clarke went on to top score with 56, from 112 deliveries – his maiden county 50 – while there were also useful contributions from Simon Gregory (33) and Gurman Randhawa (31) as Shropshire were eventually dismissed for 221 in the final of their 50 overs.
Lincolnshire captain David Lucas, the former Northamptonshire and Worcestershire seamer, inflicted much of the damage by claiming 6-49.
“We recovered well from losing three early wickets when the seamers got the ball to bounce prodigiously,” said Foxall. “James Ralph and Robbie Clarke both batted well. They were very valuable innings in the circumstances.
“Getting 221 was a respectable score from where we were, but in reality it should have been 20 or 30 more.”
The early stages of the Lincolnshire innings mirrored Shropshire’s as the hosts were quickly in a spot of bother at 31-3 in the 12th over, with Shrewsbury’s Sam Grifiths, who took 2-25, marking his first appearance of the season with a couple of wickets.
But that only served to bring together opener Kelsall and Wilson, at No 5, and they went on to share an unbroken partnership of 192 to steer Lincolnshire past the winning post to 223-3 in the 39th over, both making the most of being reprieved by dropped catches before they had passed 40.
Kelsall ended on 100 not out, from 104 balls, while Wilson really cut loose towards the end to close unbeaten on 106, from 85 deliveries, a sparkling knock featuring 16 fours and two sixes.
“After the promise against Northumberland, it was disappointing,” added Foxall.
Shropshire are next in action next Wednesday, May 20 when they host first-class county Worcestershire in an attractive Twenty20 challenge match at Bridgnorth (5.30pm), with admission £5 on the night.
Pictured – Robbie Clarke during his maiden 50
Stuart Dunn
http://www.shropshireccc.co.uk/wp-content/uploads/2015/05/Robbie-Clarke-v-Lincs.jpg 415 730 Brian Foxall http://www.shropshireccc.co.uk/wp-content/uploads/2013/12/SCC-Website-Logo-340x156-WhiteText.png Brian Foxall2015-05-11 09:15:112015-05-11 09:19:59Trophy campaign ends with defeat at Lincolnshire
Team for final Trophy game