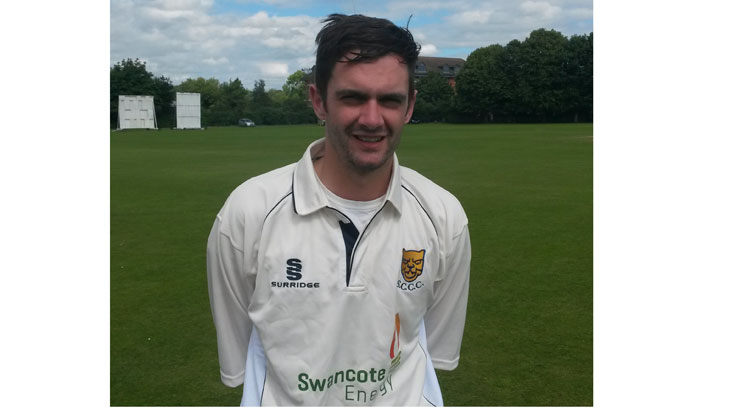 David Wainwright has credited the role played by Shropshire’s Director of Cricket Karl Krikken in his impressive start to the season for the Unicorns Championship Western Division leaders.
Wainwright, the former Yorkshire and Derbyshire left-arm spinner who is also a useful performer with the bat, has quickly become a key man for Shropshire since signing in the winter.
He has been instrumental in the county securing three wins from as many Championship games and took seven wickets in Shropshire’s last match against Cornwall before leading a successful run chase by hitting an unbeaten 80 to seal a four-wicket victory at Bridgnorth.
That result lifted Shropshire to the top of the table, 11 points clear of Cornwall and Berkshire, who will be Shropshire’s next opponents when they head to Shifnal for a three-day match which gets under way on Sunday.
Wainwright insisted he was enjoying his cricket for Shropshire and is pleased to be working with the experienced Krikken once again.
Krikken was his coach at Derbyshire when Wainwright had the most successful season of his career, helping the club win the second division of the County Championship in 2012, a productive campaign in which the Shropshire man claimed 50 wickets.
Wainwright, 31, said: “He seems to be getting the best out of me again. Whenever I played for him at Derby or playing here with Shropshire, I’ve been playing well and it’s just because he keeps it really simple.
“When we bowl he’ll just tell us to bowl in good areas for long periods of time, sit in and be attritional. In the first innings against Cornwall I bowled before lunch and seemed a bit everywhere in my action. My figures weren’t bad but I wasn’t happy with the way the ball was landing, so I had a chat with Krikk and asked if there was anything he could see.
“He just told me to slow it down, keep my front arm up and just relax and take the pace off. I then felt I bowled a lot better after lunch, and in the second innings better even still.
“Just having 15 minutes with him in a morning before a game is great for me. He’s not kept wicket for years but he kept for me one of the mornings during the Cornwall game and he didn’t drop a ball to be fair to him. He was keeping but also watching my action and helping me out.
“It’s handy to have somebody that you’re close to that you can just have a word or two with. He knows what he’s looking at and it just relaxes all the players really.”
Wainwright is now looking forward to this weekend’s clash against Berkshire as Shropshire look to consolidate their place at the top of the table.
He said: “Beating Cornwall has put us in a nice position with three wins from three. Teams who we’re playing that have not got a 100 per cent record might have to chase games now.  I’m looking forward to Shifnal and the next challenge that Berkshire will bring.”
Wainwright, who represented England Lions earlier in his career, added he’s been impressed with the quality of his team mates having not played Minor Counties cricket until this season.
He’s now determined to do all he can to help Shropshire enjoy a successful campaign after setting himself high standards.
“That’s what I aimed to do when I came and signed for Shropshire, to help contribute with bat and ball,” he said. “We’ve got a really nice bowling unit here with two good seamers up front. Richie Oliver can then bowl a few medium pace and then we’ve got a left-arm and right-arm spinner, so it’s a great balanced attack and it’s good to be a part of.
“Everyone knows their role in it and I’m just happy to wheel away at one end and get my overs in really. It’s just been a pleasure to play really these three games and I’m looking forward to the next three.”
The first ball will be bowled at Shifnal at 11am on Sunday, with admission free for spectators on all three days.
Stuart Dunn

Pictured: David Wainwright has quickly become a key man for Shropshire this season as he looks forward to the county’s next game against Berkshire.

One change for Berkshire clash
Scroll to top