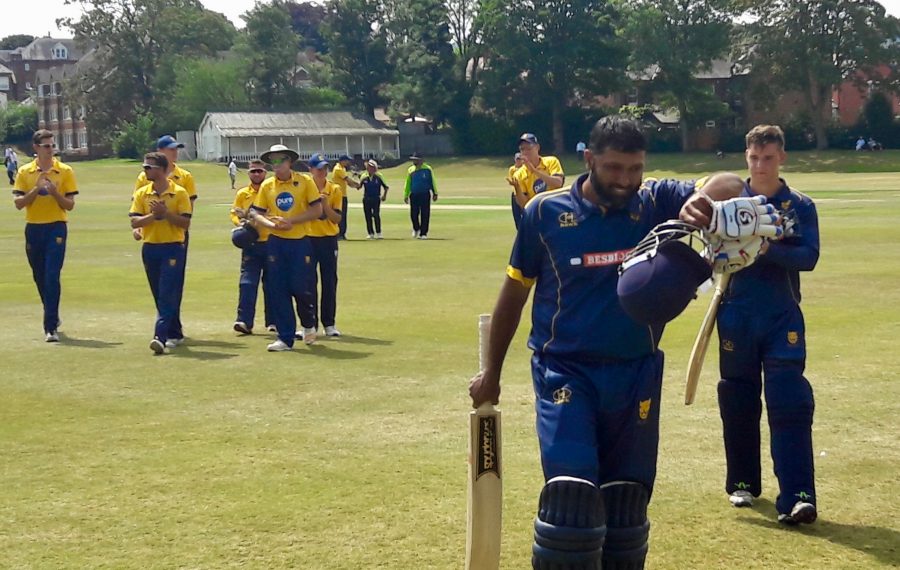 More than 700 guests from the county’s business community enjoyed hospitality and entertainment in a luxury marquee on the edge of the boundary as Shropshire played two T20 matches against an international Invitation XI.

Shropshire chairman Toby Shaw, the event organiser, said the day proved to be a big hit.

He added: “It was another fantastic day and the event seems to get better and better all the time. We were blessed with some fantastic weather and the cricket was great, very entertaining.

“The feedback I’ve had has been unbelievably positive and it was a lovely atmosphere.

“I was delighted with Pure Telecom, the new sponsors, how they embraced the day. Matt Sandford and his team were excellent.

“This was the eleventh year we have staged this event and thank you to everyone who again helped make it such a success.”

Experienced batsman Jaffer, who played 31 Test matches for India, gave another reminder of his ability as the Invitation XI beat Shropshire by 64 runs in the day’s opening T20 match.

Batting at No 3, Jaffer struck a brilliant, unbeaten 123 from just 54 balls, hitting nine big sixes and nine fours in the process. He shared in an unbroken stand of 164 for the third wicket with Shrewsbury’s young Australian batsman Tim Ward (55no) as the Invitation XI totalled 209-2.

Shropshire, in reply, were bowled out for 145, with opener Omar Ali top scoring with 53.

Shropshire batted first in the second game and accumulated 145-7 from their 20 overs. Jack McIver (50), Connor Dudley (34) and Ryan Lockley (29) kept the scoreboard ticking over, as Jeremy Marshall claimed 5-31.

The event, Shropshire CCC’s main fund-raiser of the year, will also benefit charities, including MacMillan Cancer Support, with the club to make donations to several good causes.

Pictured: Wasim Jaffer, the former India Test star, is applauded by Shrewsbury’s young Australian batsman Tim Ward – they put on an unbroken 164 for the third wicket together – and the Shropshire players after hitting an unbeaten century in the first T20 match of the Pure Telecom Challenge event at Wrekin College.