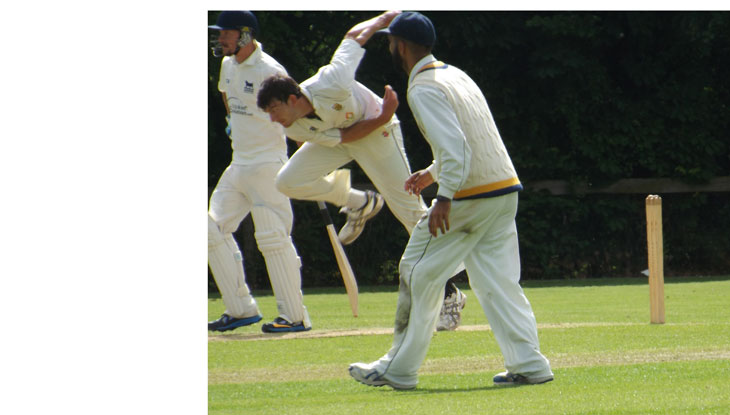 Paceman Alex Wyatt’s five-wicket haul set up a 56 run win for Shropshire at Oxfordshire to continue the county’s encouraging start to their Unicorns Championship season.
Karl Krikken, Shropshire’s delighted director of cricket, praised the efforts of the county’s bowling attack, impressively led by Wyatt, after Oxfordshire fell short in their chase to hand Shropshire their second win from as many games in the Championship this season.
Krikken said: “They all bowled really well but Alex led the attack with a five-for and he bowled magnificently well. He’s a very good bowler. He didn’t really get chance to bowl in the one-dayers because we didn’t get enough runs.
“He ran in really well and getting a five-for, you can’t ask for more than that and he seems to have a great engine. He just keeps going and going, so we’re very pleased to have him on board and he’s done a good job for us.”
Sporting declarations from both sides early on the third and final day left Oxfordshire chasing a victory target of 300 at Aston Rowant, but they were dismissed for 243, as Shropshire followed up winning their first game of the season against Dorset at Whitchurch earlier this month by securing another impressive result.
Wyatt, the former Leicestershire man, provided much of the inspiration by taking 5-83 from 19 overs before David Wainwright mopped up the tail with three late wickets.
Shropshire will now be chasing a third successive Championship victory when they take on Cornwall at Bridgnorth, starting on July 3, a match Krikken and his players are looking forward to.
He added: “It’s a good feeling in the dressing room and we’ve just got to make sure they stay fit and they’re ready to play. I think they’re doing it for each other really. They seem to be playing for each other well and representing Shropshire very well so it’s great.”
With day two at Aston Rowant a total wash out, Oxfordshire resumed their first innings on 42-3. Hugo Darby (35no) and Richard Kaufman (23no) pushed the home side’s total up to 80-3 before Oxfordshire opted to declare after just half an hour.
With both teams keen to make a game of it, quick runs were on offer when Shropshire briefly batted again. Henry Blofield and Luke Tinsley were handed the opportunity to move up the order to open and both took full advantage to register unbeaten half centuries against Oxfordshire’s occasional bowlers.
Blofield raced to 58 not out from 31 balls and wicketkeeper Tinsley, playing only his second Championship game, cracked an unbeaten 55 from 29 deliveries as Shropshire declared on 115-0 after just 10 overs.
That left Oxfordshire with a victory target of 300 from 87 overs and they were soon reeling at 2-2 after Wyatt struck twice in as many balls. After trapping opener Darby, the towering Wyatt, who stands six-foot-seven, immediately struck again in the same manner, getting rid of Darby’s Banbury team mate Lloyd Sabin for a first ball duck.
Wyatt was soon at it again, removing Harrison Ward, with Richard Oliver taking the catch, to reduce Oxfordshire to 37-3.
But Shropshire then had to wait a long time for another breakthrough as Michael Beard and Kaufman, who topped Oxfordshire’s batting averages last season, joined forces to put on 119 for the fourth wicket.
The partnership was eventually broken when Shrewsbury spinner Blofield trapped Beard lbw for a patient 66, from 150 balls.
Having had to wait so long for a wicket, another promptly fell in the next over as the dangerous Kaufman, caught by Joe Carrasco for 62, became Wyatt’s fourth victim.
From being well placed at 156-3, Oxfordshire suddenly found themselves in trouble at 158-6 when Lloyd Brock was run out by Sam Griffiths without scoring.
The momentum was now with Shropshire and Wyatt claimed his fifth wicket of the innings when Jonny Cater fell to an lbw decision. Former Middlesex man Chad Keegan was next to go with Steve Leach, the Shropshire skipper, holding on to a catch to hand Wainwright his first wicket of the match as Oxfordshire reached tea at 190-8.
The hosts were then lifted by a stand of 57 for the ninth wicket between Joe Thomas (39no) and Luke Ryan (27), broken when Wainwright bowled captain Ryan.
Then it was all over the very next ball when Will Rooney was adjudged lbw to Wainwright, who claimed 3-48 from 20.3 overs to leave Shropshire celebrating another win.
Shropshire had opted to bat first on winning the toss on Sunday and several solid contributions enabled them to post a competitive total of 264 in their first innings.
Worfield’s Ross Aucott, batting at No 7, top scored with 55, a knock complemented by Wainwright (39), James Ralph (33) and Wyatt (30), with Rooney (4-66) the pick of the home attack.
Rain brought day one to a premature conclusion but not before Shropshire had managed to reduce Oxfordshire, last year’s Unicorns Championship Western Division champions, to 42-3, with opening bowlers Griffiths, who snared two victims, and Wyatt inflicting the early damage.
Day two was totally lost to the rain but the weather was much more favourable on the third and final day as Shropshire took full advantage to gain another win.
Stuart Dunn
Picture :- Alex Wyatt during his 5 wicket haul on final day at Aston Rowant
http://www.shropshireccc.co.uk/wp-content/uploads/2016/06/Oxfordshire-19-21-June-2016.jpg 415 730 Brian Foxall http://www.shropshireccc.co.uk/wp-content/uploads/2013/12/SCC-Website-Logo-340x156-WhiteText.png Brian Foxall2016-06-21 20:23:462016-06-21 20:23:46Wyatt leads the way as Shropshire enjoy victory at Oxfordshire
Shropshire CCC profile: Sam Griffiths